Home » Blog » Surabhi Gautam, IAS – Navigating through the hurdles of Life to reach her Goal 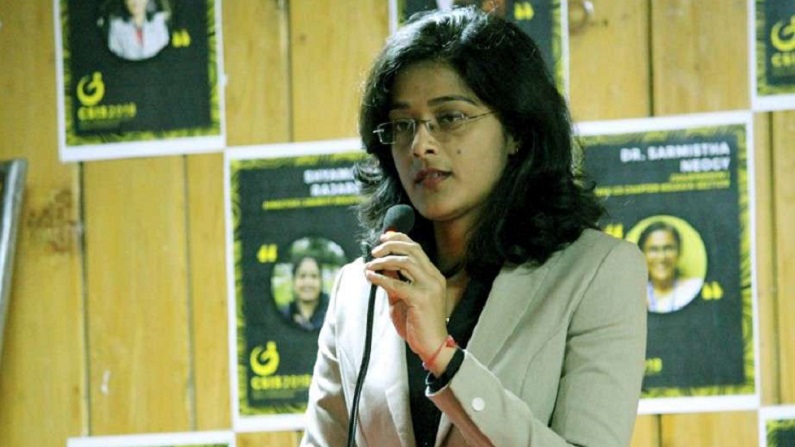 Born in a middle class family in a small sleepy village of Madhya Pradesh, Surabhi was always cognizant that her parents were her constant pillars of support while other members of the family would have been happier with a male child born in the family. To describe in her own words – ” There were only two souls, my parents, who were overjoyed with my birth, while the remaining 30 odd members of a giant and joint family, that we were part of, did not even consider it an event worthy of celebration.” However, Surabhi traversed through all the challenges and overcome all the rejections she faced along the Journey of Life to achieve the pinnacles of success which would eventually make everybody proud of her.

25 years down the lane, the same girl, the same village and the whole family was welcoming her with garlands, sweets and slogans like – “Who should every girl be like? Like Surabhi Gautam ofcourse”. Everything had changed with her success. Surabhi has the unique distinction of clearing all the prestigious competitive exams and interviews conducted across India. She successfully cleared several competitive examinations like GATE, ISRO, SAIL, MPPSC, PCS, SSC CGL, Delhi Police and FCI exams with distinction. The feather in her cap was when she topped the IES exams with All India Rank 1. The ultimate success came when Surabhi Gautam, a University topper and a Gold Medalist cleared the ultra-competitive Union Public Service Commission (UPSC) exams in her very first attempt, securing a All India Rank of 50.

However, these successes did not come easily for her. She had to wade through extreme challenges, which sometimes even made her think of giving up, but she didn’t and eventually reached her goal. She overcame these challenges with the unflinching guidance and support of her parents and her sheer determination to set an example for other women from her village.

Surabhi always excelled in her academics. She scored exceptionally high grades in both her school and college. She did her schooling in her village, Amdhara in Madhya Pradesh, in a hindi medium Board school with very poor infrastructure and teaching staff. Her village had severe electricity disruptions and she had to study with the aid of a kerosene lamp on several occasions. But these did not deter her strong urge to excel in academics.

Something interesting happened in her 5th grade which changed the course of her life and drew her to excel in academics. She scored 100 percent in her Mathematics exam which drew the praise of her teacher since it was a first in her school. The encouragement she got from her teacher made her feel appreciated and recognized which encouraged her to study harder and perform consistently throughout her academic career.

The second turning point in her life came when she again scored 100 percent in her tenth grade in both Science and Mathematics which placed her on the state merit list. This made her a pseudo-celebrity of her village, journalists began interviewing her, splashing her accomplishments across newspapers, and people began to admire and appreciate her achievements. During one such interview, a journalist asked her what career option does she prefer to choose in the future. Despite not having pondered over it in the past, Surabhi unconsciously mentioned that she wants to be a ‘Collector’. The next day’s Newspaper headline was “Surabhi wants to be a Collector”. Little did she realize that, her words would somebody in the future turn into reality.

Despite being a studious girl dedicated to her studies, her heart wanted to diversify. She tried her hand at painting, sketching, drawing and embroidery.But then she encountered her first major challenge in life. She suddenly began to realize a weird sense of pain creeping through her body. She began to feel a stinging pain in her joints and elbows and she was soon bedridden. Despite their meager financial resources, Surabhi’s parents decided to take her to Jabalpur for treatment. The doctor diagnosed her with rheumatic fever, a disease which affects the heart, joints, brain and skin. In serious cases, rheumatic fever can also lead to death. The doctor advised that she should be given a dose of Pencillin, every 15 days, which needed to be administered with utmost care, else it could result in severe complications. Her parents were seriously worried because there was no Healthcare center nor a qualified doctor who could administer the drug in her village. Her parents somehow arranged for a specialist to administer the drug till she was cured.

The third turning point in her life arrived when she again excelled in her twelfth grade exams, appeared for the Engineering entrance and as usual cracked the exam. She was awarded the Dr. A.P.J Abdul Kalam Scholarship for her exceptional grades.

However, this time around things wouldn’t be very easy for her because she had to move out of her village and study in a city which no other girl from her village had ever done prior. Also, having studied in Hindi medium school she had to draw flak for not being able to speak in English fluently. Even though she knew the answers to questions posed by her professors, she always faltered because she couldn’t articulate well enough in English. On several occasions she was so deeply hurt and disillusioned that she almost decided to quit her studies and head back home. However, during these trying circumstances, her mother stood firmly by her and insisted that she should move ahead, overcoming the challenges. Her mother always emphasized the need for her to achieve her goal as she would stand as a constant inspiration for other girls of the village to explore and accomplish their dreams, which they otherwise would fear doing. Surabhi had no option but to persist and persist she did. She did not want the doors to close on other aspirational girls from her village who wish to pursue their higher studies outside of their village.

Surabhi meticulously studied English, practiced every single word and phrase, till she became proficient. She had crossed on more hurdle in the process. Surabhi finally completed her Engineering in Electronics and Communications from Bhopal. She not only topped her exams in her college but in the entire University. After this accomplishment there was no stopping her.

During college placement, Surabhi got a job with TCS (Tata Consultancy Services) but she wanted to do something different so she did not accept the offer. After her graduation, Surabhi worked as Nuclear Scientist at BARC for a year. She then cracked competitive entrance exams like GATE, ISRO, SAIL, MPPSC PCS, SSC CGL, Delhi Police and FCI. The icing on the cake came when she cleared the UPSC exams with an All India Rank of 50, in her very first attempt in 2016. Today, she is an IAS office, something that she had blindly mentioned in response to a question from a journalist. She made headlines then. She made headlines again and she is the proud daughter of everyone in her village – Loved, Admired, Respected and a true inspiration to other young aspiring girls across the globe.