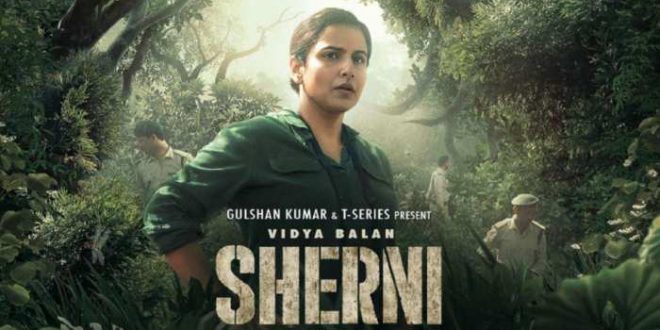 Development has led to rapid urbanization and industrialization and has also resulted into diversion of forest land for non-forest purposes. This has led to shrinking of wildlife habitat which results in animals straying out of habitat in search of food, water or shelter bringing them into Humans versus Animals conflict. This poses a serious question to the society “Can Development and Environment go hand-in-hand?”

Coming to the movie “Sherni” – we are introduced to India’s wild spaces, which face seemingly unstoppable threats from poaching, deforestation and overgrazing. But simultaneously  there are communities residing  in forests as forests-dwellers for generations, who are dependent  on minor-forest products for their livelihood.

As the movie name suggests, the movie has two “Sherni” in it; first the tigress T12 and second Vidya Balan as Vidya Vincent. The story revolves around the search and rehabilitation of T12, a tigress and than the politics, official apathy and lacklustre system involved in it.

It is very pertinent here to analyse and review the role of Vidya Balan  because she is the second “Sherni” in the movie. Vidya Balan plays Divisional Forest Officer Vidya Vincent, in the film. Her story is the story of every Indian woman who indeed are Shernis’. A few of them are outspoken and extrovert while others are introvert just like Vidya Vincent. Not all shernis roar in real life, rather their work and action speaks louder than words. Vidya is a woman of few words but full of self-determination and decision making ability.

It’s not an easy thing to portray a role which is generally a male dominated one,  both in real and reel world. But she has done it very convincingly and emphatically. Vidya, an upright officer is yarning  the brutal barriers  set by the patriarchal society for a married woman and lackadaisical attitude of people at her work place. The character of  Vidya portrays the  daily struggle, the fight, the fall and the rise  of  every woman.

Director Amit Masurkar had earlier made a simple yet hard-hitting 2017 film Newton – starring Rajkummar Rao. In ‘Sherni’ too the director has done a thorough microscopic research at ground level and presented it in a simple, subtle but thought provoking manner. From first scene to the last one he has a complete grip over the movie and that translates into a consumed audience.

Cinematography is very fine and made in a documentary-style realism on the ground and drone shots from above. It presents a romantic view of the dense, green jungles –  sunshine, streams, buzzing of insects, rustling of leaves, distinct sounds of birds and animals.

The screenplay  is meticulously detailed, giving an insight into not just the protagonist’s mind but also the workings of the department as well as how the village and the forest are intermingled  in their existence.

If you are expecting regular bollywood dramatic twists and turns, melodrama, glamour of the jungle and forest officers’ lives than this movie is not for you. The movie has limited dialogues and no artificial thrill-adventure. The silence and the camera lenses speak in volume about the condition of forest, its conservation,  human greed and hurdles for an upright officer.

The “Sherni” shows that women have achieved it all and done so while fighting societal prejudice and taboos. It’s an ode to the millions of the women who want to get rid of iron cage, want to fly, set up their own path and make an impact in the society, sometimes even without making any noise.  If you belong to the genre of simple, realistic and message giving movie than this is a must watch.

The Invisibles – The Caste Question