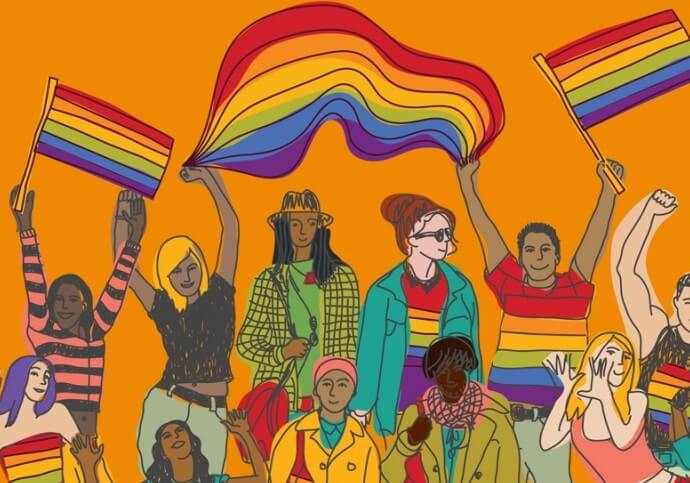 Despite being the world’s largest constitutional democracy, India continues to struggle with heteronormative constraints that undermine different sexualities. For many years, the LGBTQ community has been at odds. The government’s main slogan has been to secure this community through justice, equity, and harmony. Previously, the LGBTQ community was known to simply include the gay community, but it eventually expanded to encompass different sorts of homosexuals. Discrimination against this minority has grown frequent; they have been separated and estranged from society, and they have been denied the basic fundamental rights to which they are entitled as Indian citizens. The rights of this group have recently been recognized, and the judiciary has intervened to preserve them.

As of today, members of the community do not have any special legal rights. They are allowed by law to participate in consensual sexual activity because criminalizing it would be a violation of their fundamental rights. As a result, the scope of their rights has to be understood to be the same  Fundamental Rights that citizens in this country have. However, members of the community, still do not have access to all the civil rights that citizens of India enjoy. For example, they are unable to legally register their marriages, as their union is not recognized by Indian law.

The landmark judgment of Navtej Singh v. Union of India (AIR 2018 SC 4321) was a breakthrough for the members of this community. On September 6, 2018, a five-judge panel unanimously declared Section 377 of Indian Penal Code as unconstitutional. The existence of a law that criminalized consensual sexual intercourse between adults was held to be violative of Article 14, 15, 19, and 21 of the Indian Constitution and also the Universal Declaration of Human Rights. The Court went on to say that all community members are entitled to all of the Constitution’s guarantees, including equal citizenship and protection from discrimination.

Within the territory of India, Article 14 of the Constitution guarantees everyone equal standing before the law and equal protection under the law. The term “any person” here refers to any human, with no discrimination based on caste, creed, religion, sex, or any other category. The interpretation of the word “person” was broadened in the case of National Legal Service Authority v. Union of India (AIR 2014 SC 1863), and it was held that Article 14 of the Indian Constitution does not limit the word “person” and its application solely to males and females. Hijras/transgender people who are neither male nor female fit within the definition of “person” and are thus entitled to legal protection in all spheres of State activity, including healthcare, education, employment as well as equal civil and citizenship rights, as enjoyed by any other citizen of this country.

The right to life is one of the most basic fundamental rights, and no one, including the government, has the capacity to violate or revoke it. The right to select one’s own identity is one of the most important rights under this article to living with dignity, according to the case of I.R. Coelho v. State of Tamil Nadu (AIR 2007 SC 861). One of the most essential features of Article 21 of the Indian Constitution is the right to a dignified existence for transgender people. Non-recognition violates their right to dignity; hence they need full rights to specify and live their lives without fear.

Various inhuman activities, such as human trafficking and beggary, have been designated as offences and are punishable under Article 23 of the Indian Constitution. The scope of Article 23 is extraordinarily broad because it encompasses any sort of prejudice that is prohibited. Transgender people are the worst victims of exploitation; because of their low socioeconomic standing, they engage in prostitution and other immoral acts, which society considers unacceptable. The goal of this article is to protect the independence of a person’s identity by prohibiting men from exploiting men.

Additionally, the Indian legal framework’s failure to recognize the “Third Gender” has resulted in systematic denial of equal protection under the law and pervasive socio-economic discrimination in society and in Indian workplaces. The Transgender Persons (Protection of Rights) Act, 2019 was recently enacted by the Indian parliament in response to the NALSA judgment.

As defined in the Act, ‘transgender’ refers to and includes all individuals whose gender does not conform or match the gender assigned to them at birth, including trans-man and trans-woman (whether or not they have undergone sex reassignment surgery (‘SRS’) and individuals with socio-cultural identities such as ‘kinner’, ‘hijra’, ‘aravani’ and ‘jogta’. Below is the list of rights that this act guarantees.

Now, the significant question needs to be asked is: Is this law sufficient and fulfilling their purpose? The answer lies in the vehement unacceptance of this law by the members of LGBTQ+ community. When community members are dissatisfied with the laws that control them, good lawmaking and execution becomes difficult. This Act exemplifies the importance of consulting the citizens of the community for whom these laws are being enacted. A transgender person must file an application to the District Magistrate for a certificate of identity as a transgender person, according to this Act. This rule not only hinders self-determination, but it also ignores people who identify as non-binary or gender-neutral.

The country’s transgender population was dissatisfied with these parts of it at the time, claiming that they were discriminatory. They have waged a vigorous campaign against the Act. Again, ensuring that legislation are gender-neutral is one method to fix this. In the event when a specific segment of society, such as women, requires greater protection, new laws have been enacted to safeguard their interests. The LGBT community, too, needs to be uplifted. As a result, it is critical that new laws be enacted to protect their rights, and that they be consistent with current laws to avoid unintentional discrimination amongst communities or groups.

The Locker Room Culture Needs to Be LOCKED!