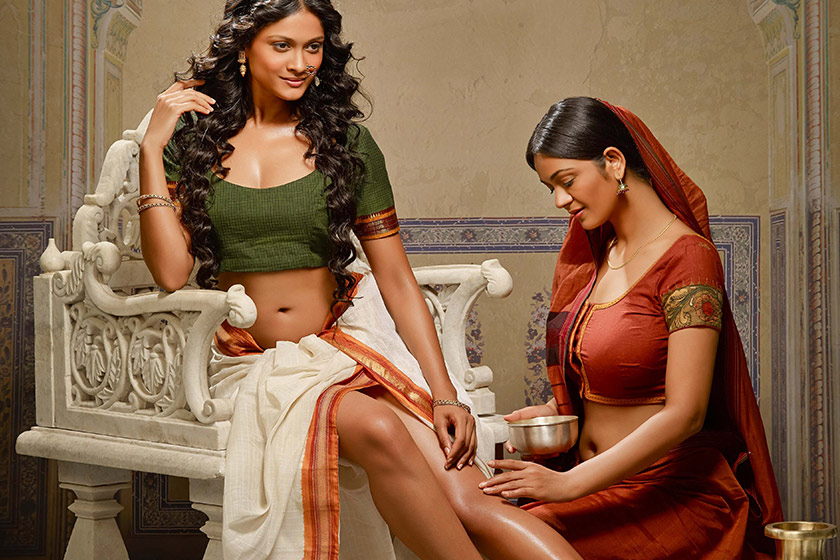 In the 3rd century AD, Kalidasa, one of the greatest writers of ancient India, made a reference to ‘dancing girls’ that were present in the prominent Mahakaal temple in Ujjain, in his work, Meghduta.

“Begemmed their hands, and their jingling navels please, though wearying the chowries and the dances. But shoot your raindrops through the nail marks, soothing, the courtesans will cast you sidelong glances, Their rows in unison as honey bees.”

These girls mentioned by him were known by many names- ‘Devar Adigalar’ in Tamil Nadu, ‘Basavi’ or ‘Jogini’ in Karnataka, ‘Mathangi’ in Maharashtra and most commonly, Devadasis. The term ‘Devadasi’ is a Sanskrit word which means ‘a female servant of God’. They were young girls who were dedicated their life to the service of temples. They had an upscale artistic tradition of dance and music, and were prevalent in the Southern Indian states of Karnataka, Andhra Pradesh, and Tamil Nadu. There is no definite origin of this tradition but it is estimated to have emerged somewhere between the 3rd and 12th century. They used to start at a very young age, and would spend their time learning traditions, rituals and focused on perfecting their arts. In fact, Bharatanatyam also is nothing but a modern incarnation of the Sadir dance performed by these women centuries ago. Devadasis were often referred to as a caste, but according to the Devadasis themselves, there is only a Devadasi way of life, and it’s not a caste. Some believe that the practice arose from the myth of Renuka, the wife of Jamadagni, who was beheaded by her son, Parasurama. It was during the Chola rule that the Devadasis were at the height of their powers and glory. The Devadasis were a professional, matriarchal, and traditional community that developed well-defined practices, customs, and traditions best suited to live their lives but they did not live their lives adhering to the normal rules of sexual morality as that of other Hindu married women, but it is important to notice that the only fact that they were married to a deity did not mean that they could be deprived of the regular pleasures of life: love, companionship, and child-bearing. There is the most common misconception that Hinduism is an extremely conservative religion with no room for  liberal views. One cannot understand the practices of the  Devadasis with such ethos.  Young sex workers, especially in third world countries are often painted as causalities of backward traditions, poverty, and victimization. These characterizations, although creating a tragic narrative that boosts sympathy, often fail to capture the actual complexities of the experiences of these girls. The Devadasi system, especially, is a victim of this twisted narrative.

Kalidasa’s Meghduta made references to dancing girls, and several Puranas recommended the enlistment of singing and dancing girls during worship. The affluence and reputation of a temple was directly related to the number of Devadasis present. For instance, the Brihadeeshwarar Temple at Tanjore maintained over 400 such girls.The reason behind this practice seems more rooted in the South rather than the North of India is because of the destruction of temples by Muslim invaders.

It creates no doubt that the Devadasis brought in the two things that temples were in need of: money and publicity. The girls would find wealthy patrons and were invited to a large number of auspicious occasions. The concept of ‘dedication’ of a girl made it a symbol of prestige to sponsor her. Their mother and grandmother would arrange for a desirable man. There was an implied contract in place that the devadasi would not provide her offspring, nor any duties that a wife would usually have, and in return, her progeny would not lay any sort of claim on inheritance.

There is also a section of the Devadasis that  is often overlooked. The lives of male Jogappas in the Hubli-Dharwad region of Northern  Karnataka is hardly discussed anywhere. Forced into believing that the goddess Yellamma has bestowed divine possession, the transition of a young boy into a Jogin is initiated by a set of  “incurable” physical ailments like rashes, foul odour, fits and even dreadlocks. They are considered serious symptoms of divine possession and neither the priest nor the local witch doctor was able to provide them a cure. The parents of the child ultimately turn to a place called Saundatti where these boys are taken into the “service” of the goddess.

Initially, they only offered their companionship to kings and other noblemen. As the years  passed by, they began offering services to the common public as well. Currently, Devadasi system is a misunderstood and deteriorated concept which has been reduced to a base of operations for human trafficking, abuse, prostitution and slavery. According to the National Commission for Women, there are 48,358 Devadasis in India.

The majority of active devadasis are in Karnataka, with over 22,491 individuals, Andhra Pradesh with 16,624 individuals, and Maharashtra with 2,479 individuals. Many of them belong to the scheduled caste community. Majority of them are very young(11 or 12 years of age.) These girls attain puberty at 12 or 13 years of age, and get their first sexual partner by the time they reach 15. They are clueless  about protection, making them vulnerable to sexually transmitted diseases.

The real major change was brought by the Bombay Devadasi Protection Act of 1934. In Furtherance, the Madras Devadasi (Prevention of Dedication) Act,1947 and the Karnataka Devadasi (Prohibition of Devadasi) Act, 1982 came into existence. These Act deems dedications to be unlawful and penalizes any person who performs it. Any such person can be imprisoned for a term that can extend to 3 years and fine of Rs. 2000.  If the person is a parent or a relative the punishment increases to imprisonment for 5 years with  a minimum of 2 years and a maximum fine of Rs. 5000 with the minimum being Rs. 2000. It extends powers to the state government to make any rules regarding the same. The Karnataka Act provided significantly for the welfare, rehabilitation, custody and welfare for these Devadasis. This was followed by a similar enactment in Andhra Pradesh in 1988. However, the state government has only laid out the framework, and even now, there are no rules as to implementation. A study by NLSIU and Tata Institute of Social Sciences exposed the neglect and apathy shown by the government towards this disturbing practice that still haunts communities.

The people who force or encourage these young girl to become a Devadasi are mostly their own family members. Therefore, it is no surprise that the girls are unwilling to report their own family members. Even after a case is registered, it is highly unlikely that they will cooperate with the police, or the courts. Moreover, law enforcement also fails to take suo-moto cognizance on these issue.

A Devadasi is a woman who is raped even before she truly understands her own sexuality, who is robbed of her innocence, who leads a miserable life with no respect or love, and a woman who still struggles to maintain her dignity and self-respect in spite of the revulsion society shows towards her. For far too long, she has been living in the shadows, and has not been seen as a complete human being: one with hopes, dreams, and aspirations. They are a victim of circumstances and their current state does not mean that they had forfeited their right to dignity.

Abortion Law in India: Not Quite There Yet