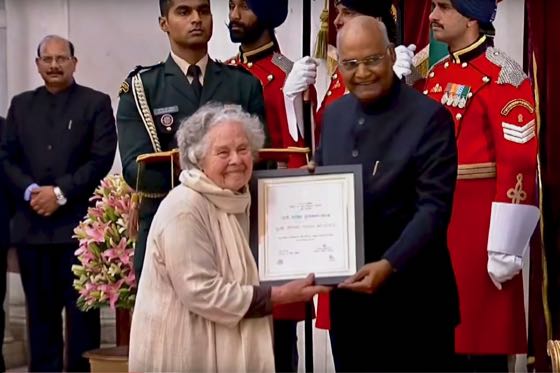 The modern path of development seems highly unsustainable and a threat to nature but Didi Contractor had chosen an alternative path of sustainable building and nature loving architecture. She was the pioneer of nature friendly construction as she worked on the principle that ‘build the future with those materials which can go back to nature’ and she introduced her brand of designs depends on mud, bamboo, slate and stone. The lover of planet earth said a peaceful goodbye to all on 5th July 2021 but left behind her architectural knowledge and legacy to design buildings which balances “earth, wind, water and fire”.

Her original name was Delia Kinzinger who was the only child of German father and American mother. She grew up in America. Delia (Didi) majored in art from University of Colorado Boulder and wanted to be a professor but such jobs for women in those days were difficult, but she did found her life partner- Indian building contractor Ramji Narayan who was pursuing his civil engineering degree there. She moved to India with her husband and lived in Nashik & Mumbai where they raised three children. Post 1960s was the time when she decided to fly and live her life in which she nurtured her own perspective. In 1961 she got the opportunity to decorate the Lake Palace Hotel of Maharana Bhagwant Singh Mewar, the Maharana of Udaipur and this was the first time she got introduced with India’s rich craft and building traditions. She designed a small cottage for actor and friend Prithviraj Kapoor which later became Prithvi Theatre. Since the age of 11 she was inspired by the American architecture Frank Lylod Wright and his organic architecture philosophy. Her vision got new and sharpen, after her interaction with social reformer Kamaladevi Chattopadhyay about traditional Indian crafts. She was deeply influenced by the ideas of philosopher Ananda Coomaraswamy on art and swadeshi and Gandhian ideas of appropriate technology. In the 1970s, her life circumstances moved and brought her to new home in Sidhbari in Kangra Valley in Himachal Pradesh where she spent rest of her life.

Didi Contractor was a self-taught architect as she never received the architect degree officially. In an interview she said that “women can’t be an architect those days and so couldn’t taught mathematics”, it was that impediment that paralyzed a part of her architectural skills otherwise she would have done much more. But she definitely championed the handmade kind of architecture and completed her journey from art to architecture and interior designing.

Didi’s life- from food she ate to cloth she wore was an example of ‘how to live sustainably’. She was always conscious about those issues which are now present in today’s environmentalists’ agenda. Her love towards mother earth reflected in her style of architectural designs. She was inspired by local construction traditions. She learnt more about the utility of mud, bamboo, stone and slate in construction and constructed her own style of sustainable buildings, promoting local skills. She further discovered her own ingredients like rice husk, pine, etc mixing with mud for insulation and using shredded wastepaper, cow dung and adhesive mixes for low maintenance wall plasters. The innovation of new techniques of viable and functional construction with traditional materials was her greatest achievement and contribution in the field of architecture.

Her architectural outlook was unique as: one, she focused on building in harmony with nature rather than in conflict with nature otherwise “nature will be in conflict with us” therefore she was interested in landscaping which means, in her own words “I imagine a building as growing, like a plant, within a landscape as landscaping is really a key to this thing of marrying the earth to the building”; two, she perfected the art of handling traditional building materials and techniques which cannot be learnt through books but experiences; three, she aimed to create eco-friendly architecture therefore she invented a unique approach of following the ‘rhythm of universe’ or the ‘cycles of nature’ and synchronize it with the process of construction.

She strongly believed that technology should work in creating eco-friendly structures, built as per the season and region. For her, light is the soul of architecture which she rarely finds in today’s dingy dark blocked pattern city houses. Unlike traditional mud houses, hers was designed for a modern life looking after every contemporary needs and presenting an alternative model balancing modernity with ecology and equity which is further adjusting the two difficult binary together- ‘Development’ and ‘Sustainability’. She believed that architecture could not be practiced in vacuum because every design has deeper social and economic implications. As the handmade building elements, other than ecology, also has impact on livelihood of craftspeople and masons because mud buildings are extremely labour intensive. It generates employment at the local level as “each section of a mud wall employed several labourers, from those who dug-up and mixed earth with water and husk, to those who made mud bricks and dried them in the sun, to those who laid bricks to build mud walls, and finally to those who plastered mud walls”. From ‘material to making’ Didi’s brand of architecture and building designs take away monetary resources from capitalists to local economies. She has strongly presented an alternative architectural model in front of India’s profit oriented construction industries.

Her handmade architectural designs and buildings, though depends on so called ‘traditional techniques’ and ‘traditional materials’, are functional and pragmatic. Her construction designs reflect that she matured the art of handling light in the interiors very imaginatively and artistically. While constructing in the hills, she managed to show the hidden qualities of ‘mud’- as a radiation absorbing agent, as a good insulator, or even be earthquake resistant. Madhulika Banerjee, Political Science Professor at University of Delhi, argues that it is disappointing that “anything produced by handmade, rural and at a small-scale, would be an embodiment of skill, knowledge, culturally rich, but not functional” and “a crucial shift is required in this kind of understanding”. She further argues that what is called “traditional knowledge” is actually “Already Existing Knowledge System (AEKS)” which provides an alternative sustainable path of development which is ecologically viable as compared to modern capitalist unsustainable path. Didi Contractor challenged the modern style of construction which is inevitably dependent on concrete, looked into AEKS of architecture and came up with sustainable architecture and building designs which met the modern requirements.

During the last three decades, she has designed and built several mud houses in and around Kangra. The prominent buildings or the institutions built and designed by her are Dharmalaya Institute for Compassionate Living in Bir, the Sambhaavanaa Institute of Public Policy and Politics in Kandbari for lawyer Prashant Bhushan, Nishtha Rural Health, Education and Environment Centre in Dharamshala. She has trained numerous craftsperson, architecture interns and students.

There are two feature films in which Didi was the subject these are Earth Crusader (2016) and Didi Contractor: Marrying the Earth to the Building (2017). She won the 2017 Women, Artists, Architects and Designers Asia Life Time Achievements Award. In 2018 the respected president of India Ram Nath Kovind honored her with the Nari Shakti Puraskar for the contribution in eco-friendly sustainable building designs. Didi is still alive in the buildings and houses she built and in the incredible knowledge she left about the use of local, alternative & sustainable techniques for construction. Didi Contractor will always remain as a source of inspiration for architects, artists, environmentalists and for us to choose a sustainable path.