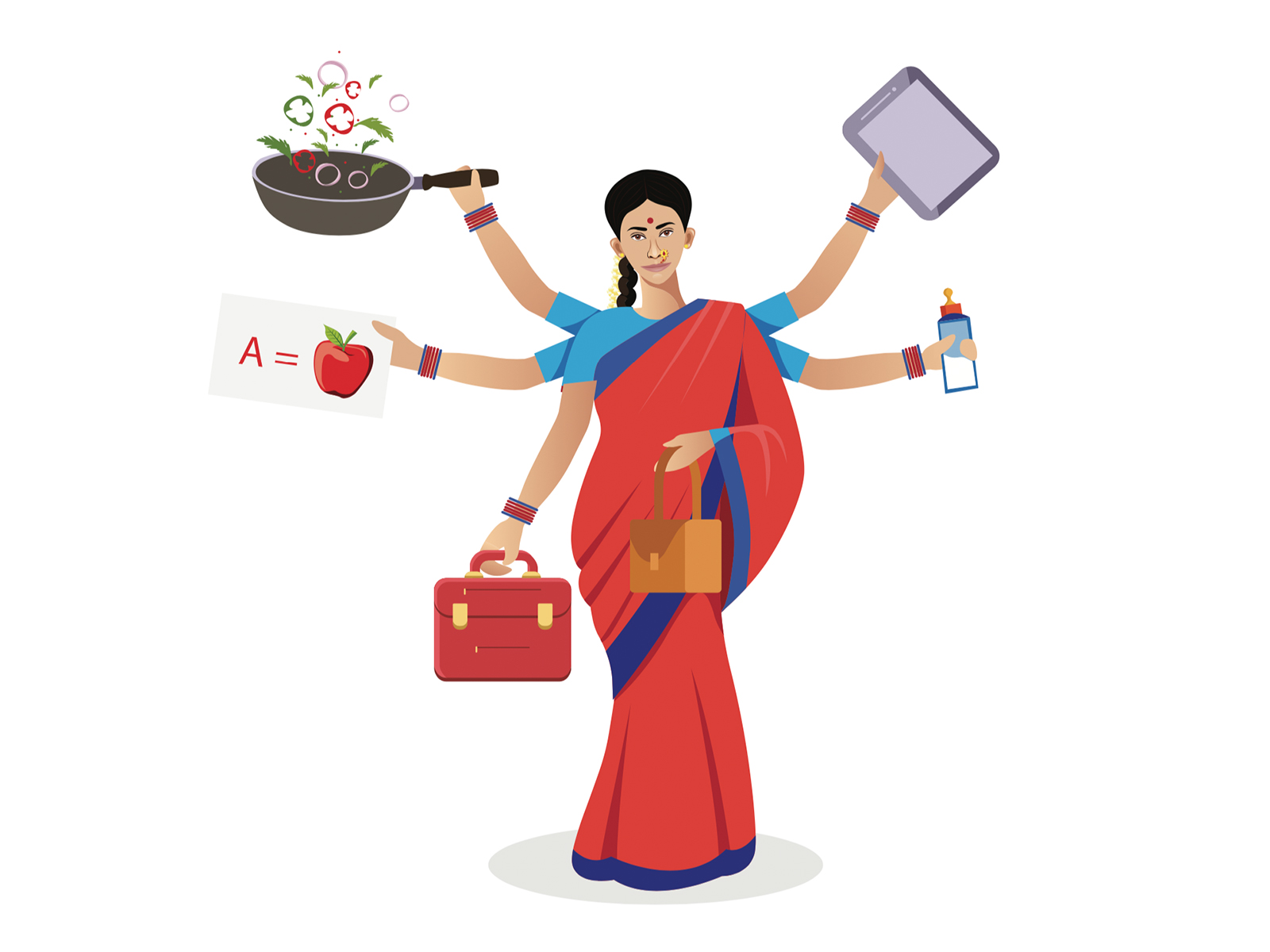 By Prakhar Tripathi and Sanchit Seth

Mom I need to eat pavbhaji today. Mom I need chole today; mom the food is so bad. Mom where are my shoes; mom why is my shirt not pressed? Mom… mom…

Haven’t we all said this to our moms god knows how many times in our lives? Do we ever think about the humongous amount of work a homemaker does, by virtue of being a wife and a mother? She doesn’t ask anything in return – only love and affection is what she needs and even that her family fails to give many a times.

Let’s try to calculate the amount a homemaker would earn, if she started doing these chores professionally. Cooking is at least Rs.7000 per month (PM), laundry is Rs. 2000 (PM), cleaning is Rs. 2000 (PM), teaching the kids is another Rs. 4000 (PM), and housekeeping would be another Rs. 4000 (PM). So a homemaker is doing unpaid work amounting to at least if not greater to the worth of Rs. 20000 per month or 2,40,000 a year which translates to roughly 1,24,80,000 in her lifetime. Things are even more difficult for women who live in smaller towns as in big cities households tend to have domestic help but in smaller cities this trend of house help is yet not so prevalent. Add to this mix, the difficulties faced by working women. In big cities, working women can still manage work and home, with some help but it is much more difficult in small towns, where women are still expected to finish all the home chores before attending to their professional work.

According to a 2011 study by the Organisation for Economic Cooperation and Development (OECD), the average Indian woman spent nearly six hours a day doing unpaid work. Economists believe that though it is unpaid, the household work done by homemakers constitute economic activity and should be included in the national income.

A direct consequence of this was that men came to believe that household work and rearing children is the primary responsibility of women, therefore in effect confining women to the four boundaries of the home, and also attaching a secondary status to it. But this is changing now as more and men and women do away with this traditional binary understanding of managing household and working professionally.

But in this new age India where everyone has rights, and is equal in the eyes of law – why shouldn’t housewives and home-makers be paid for their work?

We propose that a fixed wage should be given from government to the housewives as a way of recognising her contribution and providing her work with the dignity – while simultaneously rewarding women with a sense of economic freedom. This will help women realise the true worth of their own work and the money in her hands can be used for further propelling economic activity.

A similar thing was done in Venezuela in 2006 by inclusion of Article 88 in there Constitution which provided that women who work at home or who are home makers would get a pay equivalent to a minimum wage. In India, the idea of providing a fix salary to the homemakers raised a few eyebrows in 2012 when the then Minister of State for Women and Child Development Ms. Krishna Tirath talked about it.

There are a lot of households in the country where housewives do not get enough monetarily help from their husbands. Most patriarchal husbands put forth an argument that what would the wife do with the money since she has to stay at home all day – anyway. Or even if they give their wives monthly allowance they usually make them feel that this money doesn’t belong to them and it’s their husband’s hard earned money which has to be spent only on household activities and never before the prior approval of their husbands. We need to bring an end to this stereotype and make women feel that even though they spend majority of the time living in the house, they are entitled to do so with the utmost dignity and freedom. Not to mention that providing wages to the housewife might also improve the condition of the household slightly.

A major issue concerning any scheme in India is its implementation. From 2012 to now, the  bedrock of facilitating implementation has improved with advancements in infrastructure, literacy, technology and also the introduction of Jio and JAM trinity. The J of JAM trinity stand for Jan Dhan Yojna which enabled people belonging to a specific economic background to open bank accounts with certain benefits and be integrated in the formal economy. This has provided these people with a direct beneficiary transfer facility and has thus reduced the issue of pilferage.These accounts should be used for the transfer of the wages being proposed.

The next big issue is – where will the money for this scheme come from, considering the limited fiscal space available with the government. To implement a scheme like this, it has to be ensured that sufficient funds are available. This concept is similar to that of Universal Basic Income (UBI), with the only difference that it will be exclusively for women. As per the Economic Survey of India 2016-17, if UBI is provided then its fiscal cost would be at max 11% of GDP if an Income of INR 16973 is provided to 75% of India’s population. This would be reduced to 5.5% of GDP (this is maximum) if the same amount is given only to women. This money can be easily arranged by diverting funds from various existing schemes and even closing a few. For instance, this work can be included in MGNREGA, the government can shut schemes such as UJJWALA Yojna or Rashtriya Mahila Kosh or some other welfare scheme that aim at uplifting the household status by way of targeting the women of household. The Centrally Sponsored and Central Sector Sub-schemes had a budget allocation of about 5% of GDP in 2018-19. If the state government schemes are added to this – the figure shoots up by another 3-3.5% of GDP. So, in all we can say, conservatively, that Indian Government spends roughly 8% to 8.8% of its GDP in welfare schemes.

Another issue, albeit small, by many people is finding a legal basis for this initiative. The Indian preamble provides that, ‘we the people of India resolve to secure to all its citizens equality of status and of opportunity’. When an Indian woman decides to be a homemaker, she is sacrificing her opportunity for her house and children. Equity demands that we compensate for this. This maxim can provide a sound legal basis for the initiative. Article 15 provides that the State can make special provision for women to ensure gender justice and to combat the discrimination. Combine this with Article 21 that protects a person’s life and personal liberty and it cements the legal basis for providing such wages.

A side benefit of such an initiative is that the women will be integrated more firmly in the formal economy, with a better implementation of welfare schemes and poverty line estimations will also become so much easy. If, the government decides to tax these earnings it can have some extra money.

This step will also reduce the mental burden on men – thanks to patriarchy – the need to earn and support their families single-handedly. As an indirect consequence it will provide men an opportunity to learn the skill of home making and doing household work.

This idea is a way of acknowledging hoursehold work related contributions made by the women to society. This idea, if implemented earnestly and honestly has the potential to reduce poverty, enhance the social structure of women, usher the much needed impetus to social justice while also acting as a cushion to the economic shocks and provide administrative ease to the state. All this while ensuring that principles of equality are lived in its truest sense.

Half A Billion Dumb Dolls?