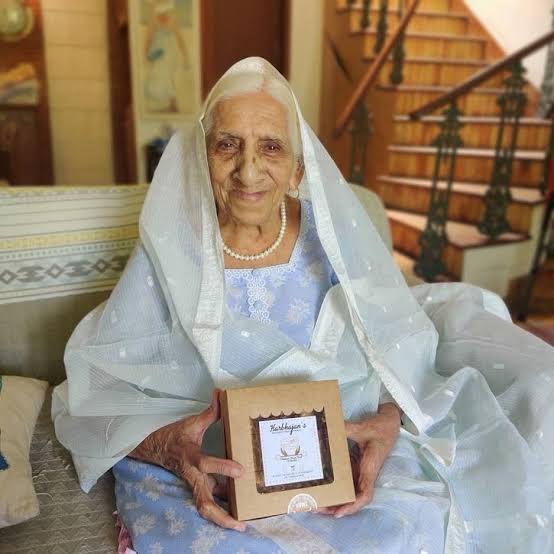 By breaking the age-long stereotype and setting out to do what she had always wished for, Harbhajan Kaur has become an inspiration for all those women who have been held back by the society.

On one fine day Harbhajan Kaur and her daughter, Raveena Suri, were sitting, conversing about life. It’s when her daughter asked her if she had any regrets and she replied that her only regret is that she had never earned any money on her own. In order to remove this regret carried by her mother for years, Raveena prompted her mother to start a small business venture by making delicacies that everybody in their family had grown up on. Little did they know at the time that this entrepreneurial venture would turn into something big. That their ‘besan ki barfi’ (an Indian sweet) in which Harbhajan Kaur has unknowingly acquired expertise over the years would be cherished and loved by so many more. That her mother who had always been a shy homemaker would turn out to be a confident lady.

Kaur, at 90, with the support of her daughter started her business 5 years back by selling her Besan Ki Barfi, which is her signature dish, in the market of Chandigarh. From her very first sale she earned 2000 rupees. It was the moment of great happiness for her as that was her first earning in those 90 years and that too for herself. It was the biggest achievement for a woman like Harbhajan Kaur who in her whole life rarely stepped out from the confines of her home and family. That 2000 rupees note mattered to her more than anything, not monetarily but otherwise. It has erased that one regret that she had been carrying for so long. It gave her the feeling of self-worth. With a boosted confidence, she was now further motivated to take this initiative forward and make something bigger of it. Her hard work, her fierce desire to do something for herself and constant support from her daughter has helped her to become a confident and an independent lady that she is today. Despite her age she has never looked back.

Harbhajan Kaur is no longer an ordinary name it has become a brand in the name of Harbhajan’s. She is a 94 year old entrepreneur in the age of millennials trying to build billion-dollar unicorns. She has become the inspiration for millions of daughters, mothers and grandmothers out there who want to accomplish something not only for themselves, but also wish to contribute towards the strengthening of the nation. She is not just an ordinary woman but an extraordinary woman.

Raveena’s attempt to do something for her mother has not only helped her mother but it has also helped in building a vision for thousands of other women like Harbhajan. Her attempt has given a dream to lots of women who could not accumulate the strength to do what Harbhajan Kaur is doing. Their small initiative has shown that women have got skills and talent, they just have to recognize it and then they too can start their own journeys in their own ways. Their small initiative is probably the best proof that women of any age, no longer have to be dependent on someone else. They both have shown that it is just a beginning of the new future. Raveena’s single attempt has created an idea and ideas are bulletproof.