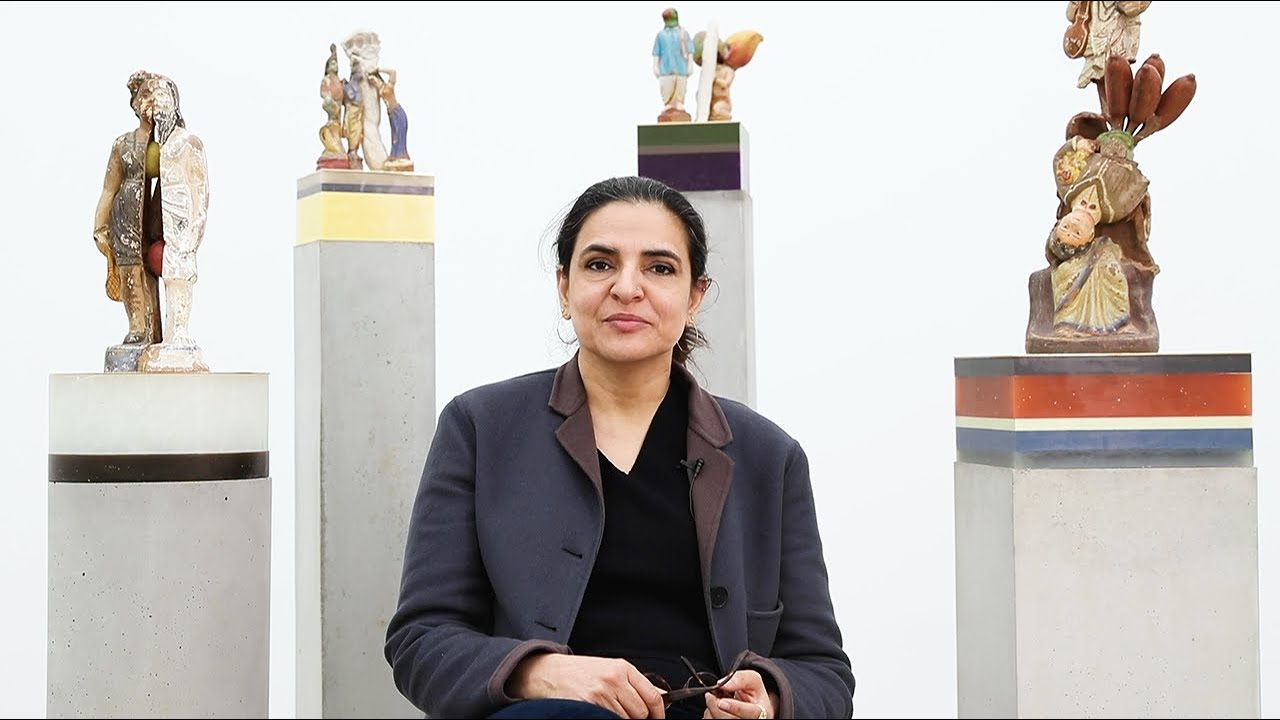 Bharti Kher is the most recognizable name in the contemporary art world who is continuously redefining the meaning of life through her masterpieces. Her work primarily encompasses a wide array of art forms including painting, sculpture, collage, photography, and installation, often incorporating found materials, using them to transform objects and dissolve the distinction between two and three dimensions. Her use of found objects is informed by her position as an artist located between geographic and social milieus. Her way of working is exploratory: surveying, looking, collecting, and transforming, as she repositions the viewer’s relationship with the object and initiates a dialogue between metaphysical and material pursuits. In essence, her art gives form to quotidian life and its daily rituals in a way that reassesses and transforms their meaning to yield an air of magical realism. She has exhibited globally enjoying solo shows in New Delhi, New York, London, Paris, Tokyo, Hong Kong, and Amsterdam, among other cities.

Born and brought up in London this iconic artist is in fact of Indian origin currently settled in the national capital New Delhi. Having done a foundation course in Art & Design from Newcastle Polytechnic, United Kingdom (1988-91) she is also an alumnus of Middlesex Polytechnic, Cat Hill, London, United Kingdom (1987-88) where she has trained herself in painting. Thus, her artworks affirm her position as a trans-cultural artist, drawing experiences from both her British and Indian roots. Western upbringing in modern Indian society is inevitably entwined into her ethnographic observations of contemporary Indian life.

In a conversation, when asked about her choice of studying art she commented “I think people were very surprised when we said we’re going to art school.” She further explained “All my cousins, friends, the people that we knew growing up as Asians are all doctors, accountants, lawyers, this is what Asian children did. If you were the first generation in the UK, you had to be a professional,” highlighting the conventional mindset of Asian immigrants.

A Toss Of Coin That Has Changed Her Life

It was in the year 1992 when at the tender age of 23 she moved back to India from the United Kingdom, having not set foot on Indian soil for almost twenty years becoming a rare reverse émigré. However, putting down the roots in India was not her contemplated call. She wanted to travel when she graduated and she chose between New York and New Delhi with a toss of a coin as she revealed “I had no intention of staying in India; I just thought I’m going to travel around the country.”

However, this visit has changed her life. Just after a few weeks, she met another best known contemporary artist of the time, Subodh Gupta, who turns out to be her life partner alongside her biggest supporter and admirer. Commenting about her art career in the country she added “The first 10 or 15 years were really very hard like any practising artist now. To decide to be an artist takes a lot of courage because there are years of rejection and a lot of loneliness.” It is true also as in India a serious lack of governmental support to art institutions can be seen.

Ultimately, her art career began to take off in 2006 when she made a life-sized female Indian elephant that was awe-inspiring in its scale, detail and beauty called The Skin Speaks a Language Not Its Own, this sculpture was one of the most iconic and talked-about works of art. After this there was no looking back for her, she has frequently exhibited worldwide getting wide-reaching fame. Her accolade includes The Sanskriti Award (2003), YFLO Woman Achiever of the Year (2007), ARKEN Art Prize (2010) and the highest French cultural award, Chevalier dans l’Ordre des Arts et des Lettres (Knight of the Order of Arts and Letters) (2015) which she received for her contribution to the landscape of contemporary art, both in France and internationally.

The fact that her work is informed by her own experience of growing up as a British-born Indian makes her unique. Close analysis of her works show that her work is autobiographical in dimension and attempts to express the view of an outsider looking in. She has emerged as an artist of importance in the open era with her multi-disciplined work in sculpture, photography and painting as she questions issues of personal identity, its societal dynamics and roles and the context of Indian traditions and culture; this while correlating to the contemporary concerns dealing with genetics, evolution, technology and ecology. Her rare style to inquire is her artistic attempt to seek answers and challenge these concepts creatively and productively. Thus, the questions of her own identity, her place, the meaning of home and culture in different ways are part and parcel of her work. Her body of work is diverse and from the materials she uses to artistic sensibilities to the subjects, she is known for her vast assortment of a subject that defines her aesthetic but she keeps the repeating patterns and the gestures constant throughout her work. She primarily engages with issues of migration, identity, femininity, sexuality, social roles, traditional rituals, gender relationships and popular culture of India, both past and present and her artworks are a depiction of scrutiny of these themes from her unique vantage point. Her figurative paintings spoke loud of the Indian patriarchal society from a feminine perspective, starkly represented in her compositions of Indian interiors.

One of her favourite materials is “bindi”- traditionally a mark of pigment applied to the forehead associated with the Hindu symbol of the third eye and over the last two decades, she has come to use it repeatedly as a “code, a text, a membrane and skin.” Notably, she has appropriated the bindi in all its various shapes, colours and forms to create complex works that are visually mesmerizing, technically time-consuming and conceptually multi-layered and her appropriation of the bindi has promoted it to the status of icon, an instantly recognizable symbol of and for the artist. Another thread that can be seen through her work is the idea of the “body” as the female body, its ageing and its processes, has been her leitmotif through the decades.

Thus, there is much to explore about her and to sum up her artistic journey one must use her words as she said “If I could remake my artistic career, I think I would be a minimalist painter. All the art that I love comes from the tradition of reduction—but I can’t because I’m super-maximum!”