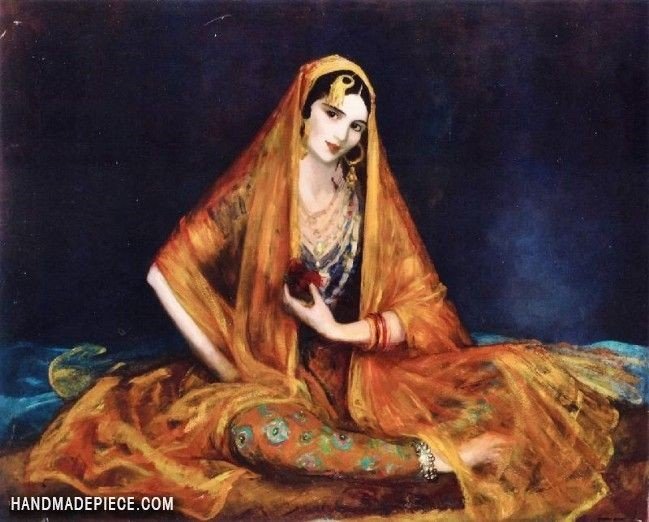 The wider Indian audience, including many women in the 21st century believe that this is the most emancipated age of women and the women who proceeded them from centuries gone by were powerless dolls dressed in finery and painted and wooed by the men of the ancient and medieval world.

Compared to most countries of the world, India has had a longer and a more complex story, where the fortunes of women advanced and regressed from time to time. India is the only country of the time where a Muslim woman was chosen by her father to be the heir of his throne, we are ofcourse referring to Razia Sultan and her father Iltutmish of the Delhi Sultanate period in the 13th century.

After Razia and into the Mughal period, we increasingly see the growing power of the Mughal women which was not just limited to women of the royal family. Many icons of Delhi, some of which are even part of the UNESCO World Heritage Sites have been built by women for their husbands.

Bega Begum was the senior wife of Emperor Humayun, who got his incredible mausoleum built. Similarly Fatehpuri Begum was one of the wives of Emperor Shah Jahan and she has left us with the iconic Fatehpuri Mosque situated at the heart of Chandani Chowk.

Born in 1617, Roshanara Begum was a Mughal princess and the second daughter of Emperor Shah Jahan and his wife, Mumtaz Mahal. Roshanara was a brilliant woman and a talented poet. She was a partisan of her younger brother Aurangzeb and supported him during the war of succession which took place after Shah Jahan’s illness in 1657. After Aurnagzeb’s accession to the throne in 1658, Roshanara was given the title of Padshah Begum by her brother and became the First Lady of the Mughal Empire. She became a powerful political figure.

Roshanara’s rise to power began when she successfully foiled a plot by her father and Dara Shikoh to kill Aurangzeb. According to history, Shah Jahan sent a letter of invitation to Aurangzeb to visit Delhi, in order to peacefully resolve the family crisis. In truth, however, Shah Jahan planned to capture, imprison and kill Aurangazeb in prison as he viewed his third son as a serious threat to the throne. When Roshanara got wind of her father’s plots, she sent a messenger to Aurangzeb, outlining their father’s true intentions, and warning Aurangazeb to stay away from Delhi.

Aurangazeb was extremely grateful to Roshanara for her timely warning. When the war of succession was resolved in favour of Aurangzeb, she quickly became a very powerful and effective figure at court. Fearing that Dara Shikoh would kill her for her role in the war of succession if he ever returned to power, Roshanara insisted that Aurangazeb order Dara’s execution. Legend has it that Dara was bound in chains, paraded around Chandni Chowk and beheaded. Roshanara then had his bloody head wrapped in a golden turban, packaged neatly and sent to her father as a gift from Aurangzeb and her. Shah Jahan, who opened the package just as he was sitting down to dinner, was so distressed by the sight of his favorite son’s head that he fell unconscious to the floor. He remained in a stupor for many days after the incident.

Eventually, however, Roshanara and Aurangzeb fell out with each other. Mughal princesses were obliged to remain single since the time of Akbar so their offspring would not make a challenge for the throne. Roshanara was rumoured to have taken on lovers, which was not viewed well by Aurangzeb.

After her fall from grace, she chose to leave the court at the Red Fort and built for herself the Roshanara Bagh complex which is about six kilometres from the Red Fort. She was a lover of the arts and music and didn’t prefer the austere lifestyle promoted by Aurangzeb. This is proven by the fact that when one visits Roshanara Bagh the remaining building itself is built in a very romantic style, a Baradari (open on all sides) built surrounded by a pool of water apart from the canals and gardens surrounding it.

Even within the Baradari the main motif for decorations seems to be nature, one can see remnants of blooms on every wall, arch and even the capitals of the slender pillars. The fades blue, green and red colours gives us an idea as to how brilliant and bright the designs were when Roshanara herself was in residence.

The main gate of entry into the gardens still has mosaics left on its upper parts, which show that a bright hue of yellow was used apart from the blue, green and red. One can imagine, how this gate shone in the brilliance of the sun with such a colour combination.

The brief history that has remained about the life of Roshanara Begum shows us what a woman she was and more importantly how open Mughal society was at least for the women of the royal household and nobility.

The fact that she was capable enough to understand the intrigues of Shah Jahan along with Dara Shikoh in order to get Aurangzeb eliminated shows us that she had a perfect understanding of such matters and how to play a role in it.

Her warning to Aurangzeb guaranteed her power when he acceded to the throne and in return she became the most powerful woman in the Mughal Empire. The fact that such a rank existed in the first place showcases how Mughal princesses were considered an integral part in the proper functioning of the State.

She had her own sources of income which no doubt increased after she was bestowed with the rank of Padsha Begum. The fact that she bought land, had a beautiful and very extensive garden complex built for herself and lived a life of luxury shows to us that she was a highly educated woman understanding the complexities of titles, deeds, interests, savings etc.

She even had the power to decide where she wanted to be buried. She didn’t choose a pious cemetery but rather had herself buried within the Baradari of her beautiful gardens, the gardens which we still get to enjoy after more than three centuries of her passing and have made her name immortal in annals of time.

The Brides and Widows of Lord Aravan

Fairness Creams and the Hope of a Fairer World