Home » Blog » Where Are The Women? 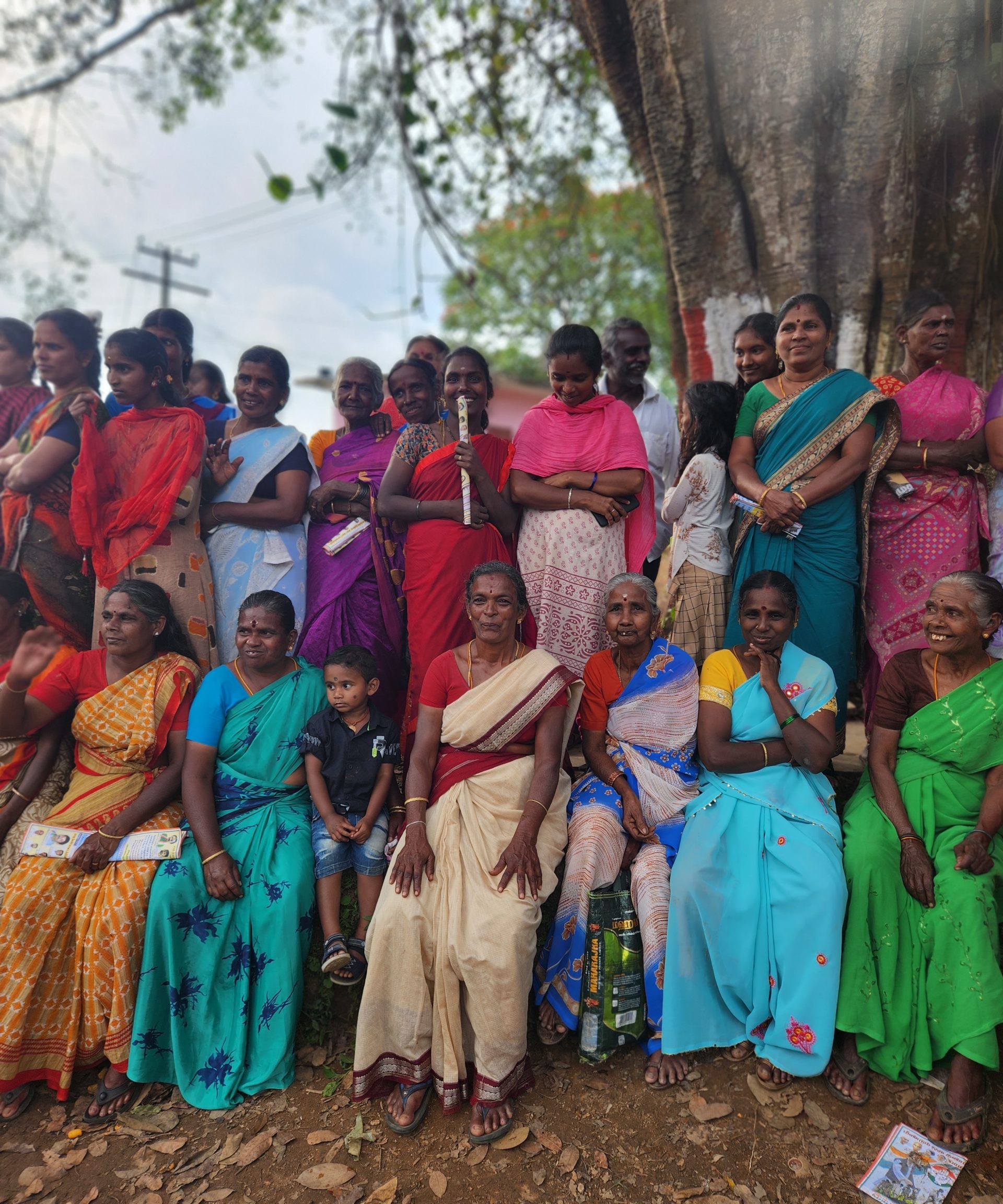 This Article is written based on my observations while walking on foot for 118 days from Kanyakumari enroute to Kashmir. While I am part of Rahul Gandhi led ‘Bharat Jodo Yatra’, the views herein are solely my own.

Amidst the cacophony of loud sloganeering, emotive faces of all ages, sharing the same curious look and glimmer of hope –  we have been wading through what seemed like two banks of a river formed by engimatic people, with warm eyes and warmer touch, all to behold Rahul Gandhi, and we would like to believe, the Bharat Yatris too (a term used for all those who have walked the entire stretch of ‘Bharat Jodo Yatra’ from Kanyakumari to Kashmir), from State after State – Tamil Nadu to Kerala, all the way to Punjab, where we are now – via Karnataka, Andhra Pradesh, Telangana, Maharashtra, Madhya Pradesh, Rajasthan, Delhi, Uttar Pradesh and Haryana. We started walking on 7th September, 2022 from the Southern most tip of India and have covered 3500 kms on foot thus far, with 15 more days to reach Srinagar.

While remembering faces amongst thousands of people who we met enroute, becomes difficult, it would always be my focus to look out for women and girls– smile and wave at them, occassionaly shake hands, and every now and then, be surprised by a warm sudden hug from a woman, melting me with emotions.

The reason I especially looked out for women, was partially selfish – which is to tell them (indirectly) and myself (in the process) that – ‘Hey, here I am! A woman walking from Kanyakumari, headed to Kashmir.’ That recognition in their eyes that women are doing this too, was both a self-affirmative thought and what I hope would be an inspiring one for them. I made it a point to wave at those women especially, who were standing atop their houses, or in balconies at the top floor of a five-six floor building or a couple of yards away, or meekly looking at us from her purdah, or behind a half-open door, for I needed them to know that I ‘see’ them.

As women, we very often suffer from the phenomenon of ‘invisibility’ – the feeling that perhaps I am not seen – something that the lead character in the latest movie ‘Qala’ (on Netflix) makes an interesting dialougue about. But why am I complaining? I am not the only Woman Bharat Yatri – we are atleast 33 of us (as per the original list of bharat yatris – although there have been some additions later on) and we got ample media coverage, so what ‘invisibility’ are we talking about?

Are all those women who came out to support us, invisible? What about those scores of girls and women who are seen sharing an emotional moment with Rahul Gandhi? Women holding flags and walking shoulder to shoulder for long distances; women holding flowers standing in long rows as an expression of their love; women dancing in their traditional attires on folk music in various states; women performing on stage on local cultural songs to welcome us; women from the tribal community putting on their massive headgears and beautiful dresses to welcome us; women standing out of their workplaces in groups to wave at us; working women, girl students, old women – weren’t they all there at the Yatra – to be seen by all of us?

Yes, except very rarely did I see women in decision making roles and spaces. Women were holding flags, but very few were on hoardings and banners. Women were dancing on the streets, but very few were in management roles mobilising people for the Yatra. Women were there on the streets waiting for us, running small chai shops, selling flowers, pausing from their cleaning work with their brooms still in their hands, but they weren’t running the kirana shops, or small and medium scale enterprises, scores of which we crossed on our way.

The beauty of living on roads, even if for a while, is that one gets to see a million stories in one frame of a second – as if everywhere you look, your eyes go ‘click’ and then in that picture you look for the unfolding of several characters.

We walked past and met several women working in the farms, on construction sites or at brick kilns. Women were seen selling peanuts, working on flower fields, in ponds, and most of these are low paying unorganised sector jobs. But very few women were seen running restaurants, or selling garments, or heading medicine shops to name a few.

I kept asking myself during the entire Yatra – “Where are all the women?”

Yes, there was a Shakti Amma, about 70 year old woman in Kerala, who had lost one of her chappal (slipper) due to the crowds in the Yatra, so she walked with one chappal, holding Mahila Congress flag for the entire day long. Yes, there was this mid-aged woman, who came running from her village, with a hand-made bouque of fresh flowers for Rahul Gandhi. Yes there was this group of Adivasi women, who didn’t speak our language and danced to completely unique music and dance steps – because someone told them that we were coming.

Women continue to be ‘invisible’ in all strata of society, including politics, because one expects them to do what is told – not to give them agency or decision making power. In Congress, there are honourable exceptions – of strong women who have made it on their own but their numbers are still far from ideal. While Congress is the only party to boast of having ushered in many progressive laws for women safety and women empowerment, the represenation of women – not just symbolic but effective representation of women by  providing them with a real say in decision making, remains an uphill task. Ensuring 33 percent of reservation for women in Panchayati Raj system was a great start but we need to strive towards ensuring 33 percent reservation in Parliament. The decision of Priyanka Gandhi, to give tickets to women in Uttar Pradesh elections, was itself a very bold move. But beyond just political representation, the real stuggle for women in India is to emerge as a political force, such that no political party can do away with mere lip service to their cause.

In speaking to hundreds of women and having multiple conversations with them across states, one thing is clear. There are some low lying fruits – some easy steps that can be taken towards women empowerment, safety and representation, provided there is political will. Start a women’s cooperative revolution; start a parallel women’s police force ; ensure easy credit loans to women entrepreneurs and women heading small and medium scale enterprises ; provide major boost to skill training for women; start nation wide self defence training program for women ; pay attention on the status of foster care homes for women –  to name a few. Some nation-wide programmes for women empowerment, which create a win-win situation, are the need of the hour.

For instance, take up something simple as ‘sewing’ – provide that training to women at all levels and create a potential garment industry revolution. Now it’s not as easy as it reads, but we need to think on these lines to economically empower women who don’t have education, or empolyment opportunties.

We have to move away from discussing women issues on specific days, or around specific events. We need to move away from patting ourselves at the back for a few heroic achievements of individual women, and focus on ushering in systemic change. We need to ask ourselves some tough questions, such as – why do women in India still have to bust their gall bladders by not being able to use clean toilets? Why do our girls still have to walk for kilometers to go to schools? Why are women almost absent from public spaces and men seem to use these spaces as if they are the sole users – be it on roads, grounds, parks etc.? Why are we still arguing about what women wear or who they choose to marry, without caring enough about their education and healthcare? And why have we failed to put forth a concrete road-map to make India safe for women?

While there are many people, individuals and organisations working towards women empowerment in different aspects, what makes politics an interesting way of bringing about ‘change’ is that with one right tweak in policy, we can affect the lives of millions of women. As one renowned healthcare expert, who was walking with us in the Yatra told me – “if the government adds atleast one lentil and some ghee in the ration system (along with rice), it can significantly decrease the iron deficiency in women. Also it can lead to people cooking ‘khichdi’ and that can be one full meal for families.”

Rahul Gandhi has shown an open heart and a path of love during this Yatra. It presents him as a kind leader, something of a rarity in Indian politics. What that will mean for women in India has to be seen.

For now, women will continue to walk as they forever have. The question is – will they ever arrive or will they forever be in a Yatra to realise their full rights and dignity, something that our Constitution makers promised them on Day 1.