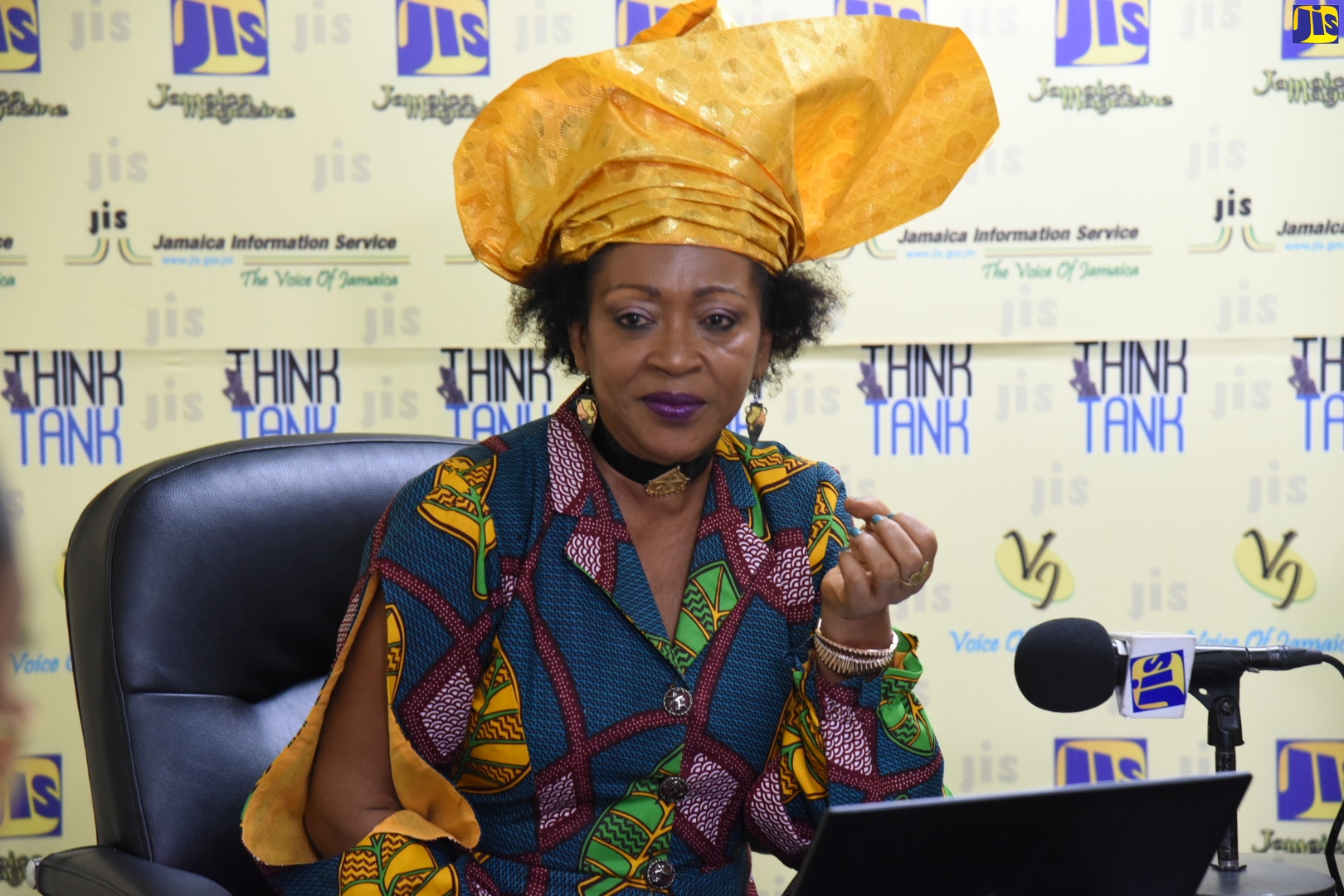 Elsa: I’m too much in awe of what you are in totality Prof. Verene Shepherd. This opportunity to chat and get to know you better is an honour. When you decided to research the history of Jamaican women, did you have some kind of an urge to unearth Jamaican feminism, the genesis of it all and tell the world that feminism is nothing new to Jamaica?

Prof. Verene: Thank you for taking the time to explore my work, ideas and influences. First of all, my overall research interest as a Social Historian, is the experiences of historically marginalized people: enslaved Africans, indentured Asians (in particular Indians), left behind men and boys, women (including enslaved women and household workers). My interest in women’s experiences was influenced by the late Historian, Lucille Mathurin Mair, who wrote the first dedicated book on Jamaican women. So she unearthed the history of Jamaican feminism.  I simply continued research to show the roots of gender-based violence and the history of women’s activism against all forms of oppression and discrimination. Mair’s work made me a feminist, though.

Elsa: As professor and director of the Institute for Gender and Development Studies at the University of the West Indies for more than two decades, your contribution to the making of Caribbean feminism through writings, teachings and research has been commendable. What do you think should be the role of educational institutions in maintaining and strengthening feminism and thereby secure social transformation constantly?

Prof. Verene: Their role should be to teach the contribution of women to Caribbean History & Development and the meaning of “feminism.” This will reveal the existence of powerful women who did not allow their sex to define them; who abhorred sexism and who showed that to be feminist is simply to believe in gender justice and equality and rights for women. It is not to be “anti-man”. Men should, after-all, be also supporters of feminism.

Elsa: How well/best can educational institutions stay networked through collaborative activities and information sharing on regional, continental and global events as far as women’s rights and gender equality is concerned?

Prof. Verene: By organizing institutional exchanges of staff and students and using today’s virtual space to host collaborative events that result in knowledge exchange. By identifying shared experiences (racism, sexism, the harm of hegemonic masculinity) and engaging in advocacy to bring awareness and inspire societal change.

Elsa: President of the Association of Caribbean Historians, Chair of the Jamaica National Heritage Trust and Chair of the Jamaica National Bicentenary Committee. You have held positions, powerful and meaningful enough to put the Caribbean countries, especially the island of Jamaica on the world stage. Any landmark/strategic enforceable decisions or course of action that you take pride in while carrying out your roles and responsibilities in one of the positions above!

Prof. Verene: My role as Chair of the 2007 Jamaica National Bicentenary Committee caused renewed focus on the impact of British colonialism on the CARICOM Region. It destabilized the Eurocentric narrative about abolition of the trans-Atlantic trafficking in enslaved Africans and uncovered new, African, abolitionists. It focused world attention on reparation and influenced my work at the United Nations, when in 2010 I became a member (and later Chair) of the Working Group of Experts on People of African Descent.

Elsa: Invasion is different from migration. Colonizing a country, thriving on the sweat, toil and blood of forced labour, opposing abolition, sexually exploiting women of colour by white men and the death of millions of overworked and brutalised enslaved people is not just unethical or unjust or uncalled-for but outright immorality, right? Did you see tangible reparations while you co-chaired Jamaica’s National Council on Reparations?

Prof. Verene: You are correct, invasion, conquest, colonization and racism are evil and immoral and the Caribbean is still living with the legacies of such historic wrongs. There was no tangible reparation in 2007; but the conversation around the justification intensified; and the movement has grown since then. Today, though, we see examples, however small, of tangible reparation by non-State actors. The claim against former and current colonizers remains valid.

Elsa: I am not sure if you’ve heard of the terrifying story of slaveholder Simon Taylor. I’m wondering if his family successors can be traced and made to pay the price. This is just a suggestion, because he was one of the biggest slaveholders in the Caribbean. At least his family must be made known so that they share the shame and not just the fortune this inhuman colonizer made by trading and exploiting slaves. Just the tip of an iceberg, but a good start. Your take Dr. Shepherd!

Prof. Verene: Yes; I know the history of Simon Taylor very well, especially through the Arcedekne papers at the University of Cambridge. I was struck by his stark disrespect for African women subjected to sale by his description of the ideal young women to be bought by enslavers. I have not, however, traced his family.

Elsa: Within the Office of the United Nations High Commissioner for Human Rights, which position made you feel it’s your destiny to be playing your part in it? Or, did you enjoy every assignment that you undertook?

Prof. Verene: The Working Group on which I served (2010-2015) and the Treaty Body on which I now serve (2016-present) both fall under the Office of the United Nations Office of the High Commissioner for Human Rights (OHCHR).  I have enjoyed the work and challenges of both positions. They call for the elimination of racial discrimination, including against people of African descent.

Elsa: Deplorable, socially unjust and dangerous, racial discrimination has been a curse on humanity since time immemorial. Walter Scott, Alton Sterling, Philando Castile, Stephon Clark, Breonna Taylor, George Floyd, Ibrahima Barrie in Belgium, the list goes on in spite of the creation of the International Decade for People of African Descent. Committees of many kinds, with different names and objectives, with experts of high moral standing and acknowledged impartiality are supposed to ensure racism is an offence, hate crime, illegal and punishable.  As a member of the Working Group of Experts on People of African Descent (WGEPAD), how often do you come across the effects of this crime and how often are the accused punished severely/ befittingly?

Prof. Verene: I am no longer a member of the Working Group of Experts on People of African Descent (WGEPAD). But while a member, I saw the effects first-hand on country visits. But I do not have to be a member of a UN body to come across the effects of hate crime etc. I travel and experience racism all the time just on the basis of skin colour. I also live in a Region scarred and disfigured by colonialism, which gave rise to racism, hate crimes, unspeakable forms of torture and punishment, racial profiling and discrimination on all the grounds set out in article 1 of the International Convention on the Elimination of all forms of Racial Discrimination.  Punishment is not as frequent as occurrence because not many countries criminalize hate speech and racial discrimination.

Elsa: When you were asked to inquire into Zwarte Piet, what’s the first thought that raced through your mind?

Prof. Verene: I was not personally asked to enquire into Zwarte Piet. African people and people of African descent brought the practice to the attention of certain UN Treaty Bodies and the WGEPAD of which I was a member. It is a custom that was condemned as racist long before the WGEPAD started to pay attention to it.

Elsa: Your piece of mind for ‘That’ Belgian UNESCO official who claimed that you had no authority to speak on behalf of the UN and were abusing the name of the UN to bring your own agenda to the media.

Prof. Verene: I pay no attention to such utterances and statements that reflect ignorance.

Elsa: Your most beautiful childhood memory, a favourite school teacher, an adorable/brilliant student you nurtured and one-two awards that surprised you?

Prof. Verene: i)I recall my father taking home a beautiful piece of black and white polka dot fabric that my mother designed and made into the most fabulous dress that I wore to a school function. I must have been about 8 years old. I did not want to take it off. ii)All my teachers brought something new and interesting to my educational journey. I see them as a collective. iii)I am so proud of all of my students. They enriched my life. I am proud of those who have followed my footsteps to become Historians or at least to study History, and also those who have embraced gender justice and human rights. One of my past students even took over from me as the GRULAC member on the WGEPAD and one, an Attorney who studied History, and now works in the Office I head, was a recent UN Fellow. My first History PhD student teaches in the Institute for Gender and Development Studies and has just done me the honour of asking me to co-edit a book with her! iv) I was very surprised to have been awarded one of the 2019 President’s Book Award at the St Martin Book Fair in that year and to have been placed on the Black Achievement Wall of Honour at the UN, New York in 2017, alongside such luminaries as President Barack Obama and Miriam Makeba!

Elsa: If I am to begin reading your books, which one would you recommend first and why?

Prof. Verene: I Want to Disturb My Neighbour: Lectures on Slavery, Emancipation & Post-colonial Jamaica (Kingston: Ian Randle Publishers, 2007) – because it explains who I am and what issues agitate and shape my consciousness.

Elsa: A thought for the day! Our take-home message!

Prof. Verene: Always be your authentic self! Pretence is pathetic!

Normalising Sex Education – One Uncomfortable Question At A Time