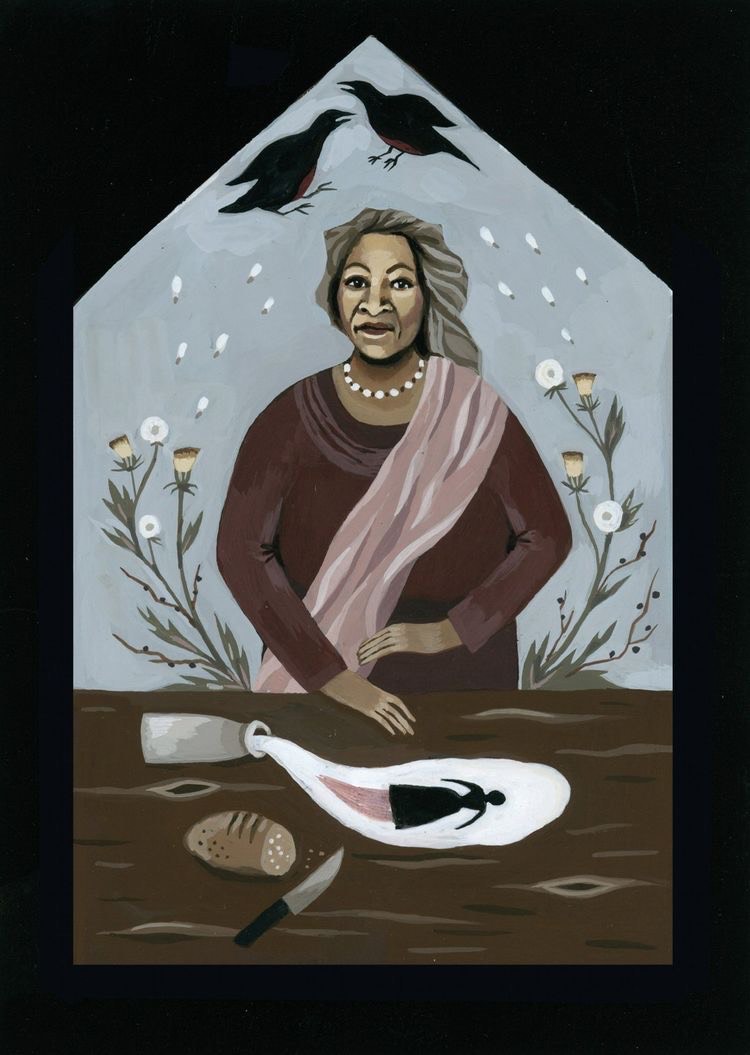 Toni Morrison was a writer extraordinaire, her impact on people’s lives went far beyond the page. She was the very first black woman to be awarded the Nobel prize for Literature, laying the groundwork for generations to come. We all stand tall on her shoulders, to say the least.

Her best known work, the ‘Beloved’, moves in terrains nobody has dared explore before.

When you think of a story addressing, revisiting slavery- all it normally does is tread along the sidelines, use grisly, graphic tales of horrors in an attempt to educate, by invoking a sense of pity.

Morrison, however doesn’t want you to look at the black experience through a monochromatic lens. She implores you to look for the complex shades of grey, even in the most enduring and trying times. While you maybe disgusted by the actions of the characters but you are never to see them as less than people, puppeteered by the slave masters and a mere product of the cotton plantations.

It’s truly an extraordinary task to write a review for Toni’s magnum opus but if I must mention, it’s an equally daunting task trying to take it all in the first time you read it – her nurtured, her nemesis, the beloved.

Morrison demands you really read her book. It is of little consequence that you may be familiar with the writing style of a Faulkner or a García Márquez, when you sit down with Beloved, you need to have a little artistic interpretation of your own, as a reader, otherwise it ain’t cutting ice with her writing.

The book is definitely not your run-of-the-mill linear tale, there is no beginning and no end to it, just juxtapositions of the horrors of the past, told through flashbacks, memories and dreams, all effortlessly blending into the present – a constant reminder of how alive the past is. The narration and the structure of the book is also compounded by an ever-switching point of view of the characters. Even the dead ones, sometimes, have their bit to say.

Beloved, is a tapestry of the imperative, very distinctive black experience that’s hard to look in the eye. Distinctive, because the characters have a voice of their own, devastatingly enough, not a choice, but you learn the complexities in their own words, through their own nightmares, their doings as well as their undoings. Her writing is almost lyrical, poetry flowing like prose and her words, definitely incomparable. By her storytelling, she manages to elegantly dignify even the indignation suffered by her people.

Set in the mid 1800s, the book is based on the real life account of Margaret Garner, a fugitive slave on a Kentucky plantation, who, in an attempt to escape the slave catchers along with the letter and the spirit of the unforgiving law- the Fugitive Slave Act of 1850, and out of utter desperation, does the unthinkable.

The great American painter, Thomas Satterwhite Noble, historically represents the very story in his painting ‘The Modern Medea’. A wood engraving of the art-piece can be found at the Library of Congress in Washington, D.C.

Margaret’s story, told through Morrison’s Sethe, explores the physical, emotional and to an extent spiritual devastation wrought by slavery.

The central character in the book is Sethe, and the book opens with the words, “Sth, I know that woman.” Several linguists argue that “Sth” is the sound of a woman grinding her teeth, it’s metaphorically conclusive for her actions which you are left free to judge but it’s sure to alter your perception, through her journey.

The story follows the residents of house 124, a black family dismantled by their former enslavement, some years after the end of the Civil War. Sethe, along with the two young boys of the family, her mother-in-law Baby Suggs, and her daughter Denver live haunted by a raucous, and at times violent, spirit of a baby. It works its way into driving her family out, one after the other and ultimately her own community ends up isolating her.

The story seams into gothic fiction, but it’s unlike any you have read before. It focuses on the haunting of the soul, that things cannot be unseen, unfelt or unremembered. The baby ghost is Sethe’s own child.

Toni was disappointed that the book wasn’t “welcomed into the horror genre, when it is in fact a classic of horror.” However, as a reader I thought that the terror that is felt in the book is hardly about the ghost itself. It has so little to do with the supernatural and everything to do with the reality of the severe dehumanization of an entire people. It’s the horror of making the reader acknowledge that slavery existed, and Toni banging the ceremonial gavel with the order that it should and it must, haunt us all.