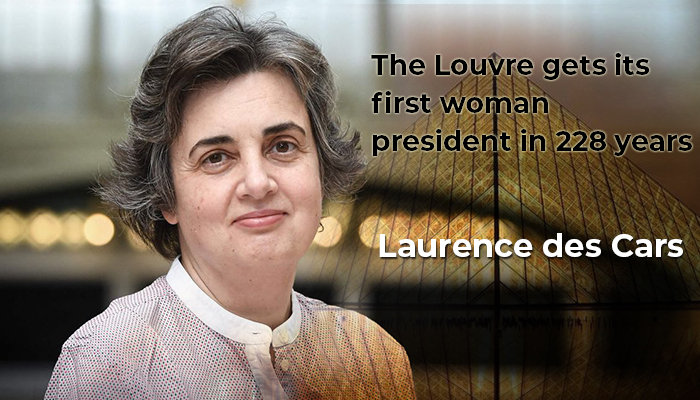 The Mona Lisa soon won’t be the only woman in spotlight in the Louvre. On 28 May, 2021, art historian and curator Laurence des Cars became the first woman to be appointed as the president-director of the Musée du Louvre, the world’s largest art museum and historical monument in Paris, France, in its 228-year history. Since its inception in 1793 during the French Revolution, the Musée du Louvre has only been led by men.

Laurence des Cars has studied art history at École du Louvre, the museum’s prestigious school and is a specialist in 19th and 20th century art. She currently heads the Musée d’Orsay, another iconic museum in Paris, dedicated to 19th century art as well as a much smaller one, the Musée de l’Orrangerie.  Des Cars joined the Musée d’Orsay as a curator in 1994, and later became its first woman director in 2017. Des Cars has won acclaim and praise for her efforts to increase greater diversity in the art shows while heading the Musée D’Orsay, and the 2019 exhibit, “Black models: From Gericault to Matisse,” is regarded as a highlight of her tenure. Des Cars will replace the current president of the Musée du Louvre, Jean-Luc Martinez, on September 1, 2021. “Four years at the Orsay gave me this confidence, this crazy idea that I could be the next president of the Louvre,” des Cars told The New York Times in an interview. Some of Des Cars’ plans include extending the museum’s opening hours into the evening to attract young visitors, expand cultural collaborations and international partnerships and create another department for Byzantium and eastern Christianity, which she says is “lost” in the Louvre. When asked about her views on a woman running the world’s most visited and largest museum in the same interview, Des Cars said, “Things are really changing for women in the museum world. Of the 70 curators in the Louvre, more than half of them are women. More women are heading museums, especially in Europe. And younger women are much more confident these days.”

Recently, as the president of Musée d’Orsay, Des Cars played a significant role in voluntarily returning a Gustav Klimt painting looted by the Nazis to the heirs of its owner – the first for any French museum. As a president of the Musée du Louvre, Des Cars wishes to break down chronological barriers and connect the Impressionists generation with the old masters by doing joint exhibitions with other French museums.

Ok Then. Remember To Shriek Wildly After Sexual Assault

Artists light up our living. Who’ll light up theirs?