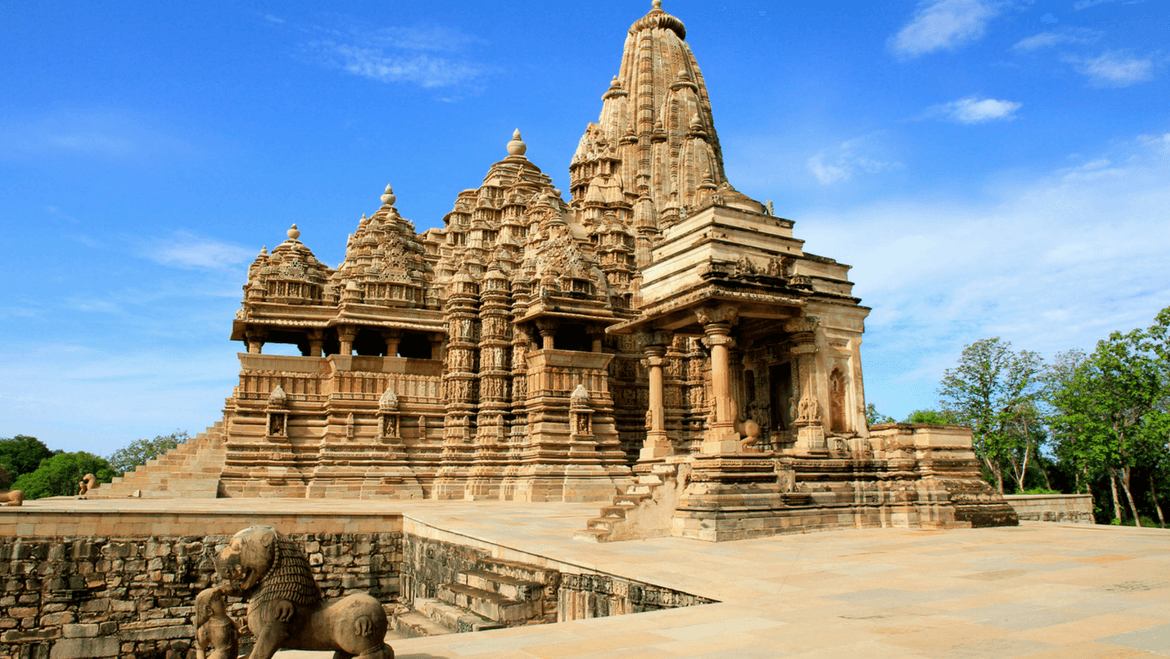 We are a country full of paradoxes. While we have the second largest population in the world (soon going to be the largest), we still consider talking about sex as a taboo – in most parts of the country atleast. Now, consider this – the world’s most well known (arguably) sex treatise was written in India – ‘Kama Sutra’, and the world’s most famous temples known for their eroticism are also in India – Khajuraho and yet our fascination for sex and related topics remains enveloped in our fantasies and imagination, instead of bathing in the sunlight of discussions.

So I decided to travel to Khajuraho myself, to understand the legend and history of this place. Here’s what I found – Khajuraho is a pandora’s box, full of interesting anecdotes. In this piece, I am sharing some bits about Khajuraho temples that I found fascinating. Also do see the brief video I made whilst there.

Khajuraho temples were built between 9th and 11th centuries by the different kings of the Chandella dynasty. Khajuraho presently has about 40000 people, and is located in Chhatarpur district of Madhya Pradesh, near Orchha. The backdrop of these temples is formed by the Vindhyan mountains – which form a natural demarcation line between north and south India.

While there were originally 85 temples, spread over 20 acres, there are now only 25 remaining and are grouped in ‘Western’, ‘Eastern’ and ‘Southern Complex’. While the latter two are free for all, there is a small entrance fee of Rs. 35 for Indians (slightly higher for foreigners) for the Western complex/group of temples. It is in the western complex, that most of the famous temples such as Lakshmana temple, Vishvanath temple and Kandariya Mahadeva temples are located. You need to fill an online form (can be done instantaneously while at the reception) which will take you about 5 minutes and you will receive an online ticket on your phone after making online payment. If you are travelling now, best to carry a mask, and a water bottle, as you will have to walk quite a bit. Although there are water stations inside.

So back to history. The temples were not all built simultaneously, but over generations, by different Chandella rulers, although one can hardly tell the difference. Chandellas ruled over Central India for about five centuries, beginning from 9th century AD. Some of the most famous Chandella rulers, are –

Yashoverman (son of Harshadeva) was the greatest ruler of the Chandella dynasty and it was in his reign that the construction of the Khajuraho temples began. He built the Lakshmana temple, dedicated to Lord Vishnu – which you can see in the video below.

Dhanga (Yashoverman’s son) built two magnificent temples – Vishvanath and Parsvanath temples. He had emerged as the most powerful king of North India in the 10th century A.D.

Vijaydhara (Grandson of Dhanga, and son of Ganda) successfully resisted the forces of Mahmud of Ghazni twice over Khajuraho, in A.D. 1019 and in A.D. 1022. A great lover of art and culture – the biggest and most elegant temple of Khajuraho ‘Kandariya Mahadeva’ was built by him.

Parmadidev was the last Chandella ruler who after ruling for about thirty-five years, eventually lost to Prithviraj Chauhan, the Rajput king of Delhi.

As soon as you reach in the parking lot of the western complex of Khajuraho temples, you see a beautiful big pond full of lotuses – this is the famous ‘Rati Talab’. The legend of Rati Talab is connected with a mythical story about the origin of the Chandellas. As per this story – Hemawati was an exceptionally beautiful woman, who had become a widow at the age of 16 years. One summer night, she went to bathe in Rati Talab. Chandrama (the Moon God) was awestruck by her beauty and descended on Earth. They made passionate love. Next morning as he was about to leave, Hemawati was very upset and threatened to curse him, as she said no one would accept her or her child. Lord Moon consoled her by saying that their son would be a valiant king whose name and fame will spread through the world. When Hemawati requested the Moon God to help her obliterate her social stigma, Lord Moon counselled her to go to ‘Khajurvatika’ where he prophesised that she would give birth to a son. He further said that when their son attains 16 years of age, he will perform a ‘yagyan’ to purge her.

Now, I cannot help but see patriarchy writ large over this story. But it does reflect the views of the day, which to be honest may not have unfortunately changed very much even after a thousand years.

In short, she comes to Khajurvatika, and that’s how with her son – the Chandella dynasty begins with the birth of Chadravarman (Lord Moon’s son). While there are many variations of this story, authorities on this subject have rejected these tales as purely imaginary. You can read the variation of this story and also the full legend in Dr. Rajendra Panda’s book on Khajuraho, published by Mittal Publishing – an excellent source for details on all things mentioned here.

First, that these temples were like a way of introduction to adult life and all that it entails. So young men and women were introduced to them only when they attained a certain age.

Second, that in Indian religion, sex has always been interpreted with a philosophical and spiritual dimension, thus advocating for its complete acceptance, without treating it as obscene. And so the walls of the temples, are but an extension of this reality and acceptance, without attaching any value judgment to it.

Third, that these temples are inspired by Tantric philosophy. As per this, those who are the real seekers of truth will remain unmoved before these sexual figures and then he/she gets a right to enter the shrine. But those who run away from it, will not be able to enter the shrine with a pure heart, thus having failed in the examination of ‘whether you have mastered your senses’. This is similar to the ‘right of passage’ practiced in other religions, where you are required to show whether you can remain unmoved when tested on your sexual desires, to demonstrate whether you are ready for a spiritual journey.

I saw these sculptures as sensual and sublime, almost meditative. But I encourage you to come and visit them for yourself. I was first inspired to come here, after reading by Osho that – if you meditate deeply enough on these sculptures, you can transcend your sexual desires. Transcending here could mean different things but the central idea being that sex, when done with awareness, and not merely as expression of carnal lust can open doors to the subconscious mind, or latent energy, hitherto unknown. [Do read, Osho’s controversial but deeply meaningful book – ‘From Sex to Superconsciousness – that got him the tag ‘Sex Guru’].

Built in the Indo-Aryan architecture style, Khajuraho temples depict the Nagar style of temple architecture, which has 1) a ground plan and an elevation and 2) the cruciform spread and curvilinear spire. Most of these temples are built by sandstone, brought from the quarries of Panna. All the temples follow a certain layout, consisting of a platform as a base, entrance steps leading to ‘Ardh-mandap’ (entrance porch), led into ‘Mandap’ (Assembly Hall), further into ‘Maha Mandap’ (Large Assembly Hall), into the ‘Antaral’ (Vestibule) and finally to where the deity is placed – ‘Garbha Griha’ (Sanctum Sanctorum). Each temple has a ‘Kalash’ or pot kept at the top of the main spire, with several half spires around it.

The temples being a UNESCO world heritage site have been kept in the same form, without any change in the interiors or the exteriors. While the engravings on the walls and the sculptures vary from temple to temple, to an untrained eye, it may appear all very similar. One cannot escape how the sculptures seem to come alive, with the curves of their bodies, the angles and positions they stand in, and the perfect symmetry, embedded in panels used along the walls.

The sculptures on the temples are all very finely chiselled, bearing out the facial expressions, moods of the characters portrayed. One cannot also but escape the celebration of Women in all their varied moods as part of these temples. From a woman getting up in the morning, to a woman, seeing herself in the mirror, to a sculpture where a woman is shown as applying vermilion on her head, to writing a letter, to being lost in thought – the walls of the temples are a discoverer’s paradise to see women as mother goddess, Apsara, Nayika, or a woman engrossed in daily activities. But in most erotic sculptures, which show plural intercourse, what depicted is often one man and more women. This itself is a good subject matter of deep feminist inquiry.

The temples in Khajuraho are dedicated to and inspired by both Hinduism and Jainism. Although built over different years and by different rulers, the existence of both Hindu and Jain temples side by side, reflect the co-existence and acceptance of both these religions amongst the rulers and the people.

While these temples were built a 1000 years back, they remained unknown for most part, after the end of Chandella dynasty. They were ‘re-discovered’ and introduced to the world, when Captain T.S. Burt came to Khajuraho on an official duty un 1838, and followed an unknown trail, taking a detour from his planned route, on being informed by his palki (palanquin) bearer about the existence of the lesser known temples.

If by now, you are intrigued enough to go visit these temples yourself, my purpose would have been served. When you go, remember to take an open heart and an open mind along. You will be happily surprised by what you find. But here is a recap of my takeaways from Khajuraho