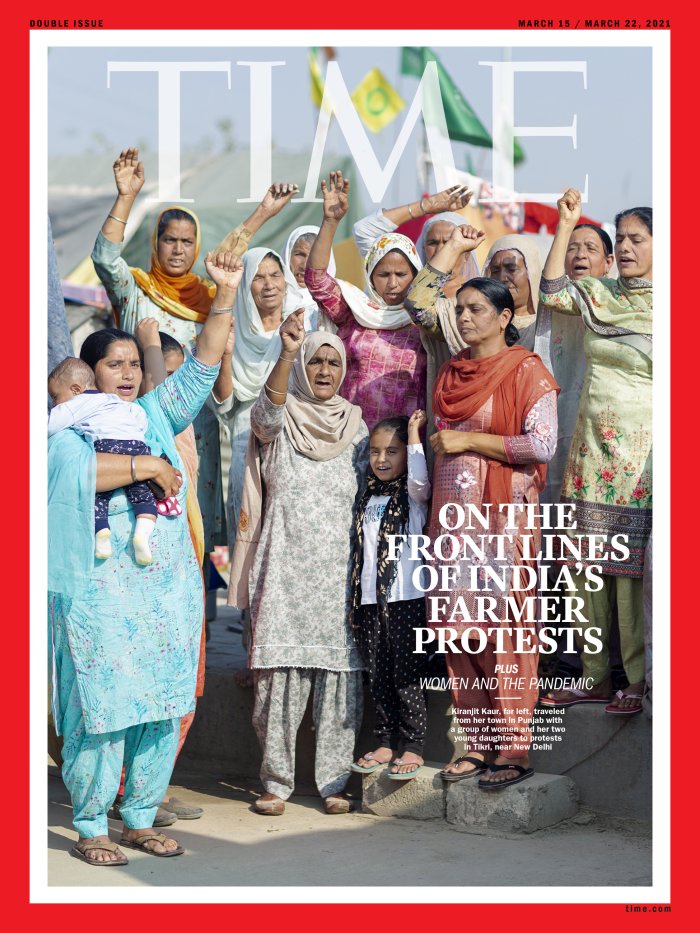 A world built on patriarchal hegemony, the task of cooking is assigned to the female gender. Yet whenever this task takes a form of commercial labour, it doesn’t make people think of females in the role. Take farmers in the field for an example. From time immemorial, farming has been a part of human civilization and women have steadfastly contributed in the labour, be it by working on the farm or feeding the farmers. And when the Supreme Court suggested that women and children should be sent back from the protest sites against the barbarous farm laws, women farmers in response scrambled onto stage, took hold of microphones and roared back a unanimous “NO!”.

In the last few years, India has seen a gigantic dip in its democratic standing. With the right-wing authoritarianism in governance, India has plummeted several rankings in various Democratic metrics. US based Research Institute Freedom House has downgraded India from ‘Free’ to ‘Partly Free’, Press Freedom Index has ranked India at 142 of 180 countries, four spots behind Sudan and the Human Freedom Index ranks India at 111 of 162 countries. Indian government has one after the other passed several laws that hit right on people’s identities and livelihoods. Last year, Indians protested against the Citizenship Amendment Act that discriminated against Muslims and at the forefront of the protest were women of Shaheen Bagh. With day and night sit in protest by older women, they garnered International attention on the protest and human rights violation at the hands of police personnel. 82 years old Bilkis Jahan, fondly known as Bilkis dadi became the symbol of resistance and hope and was included in Time Magazine’s list of 100 Most Influential People of 2020. This year, Time Magazine has dedicated its international cover to women leading the farmer’s protest. The cover reads “I cannot be intimidated. I cannot be bought.” The article in the Time magazine features women and their roaring voice against farm laws and patriarchy. Jasbir Kaur, a 74-year-old farmer from Rampur, Uttar Pradesh says she was stung by the court’s suggestion that women were mere care workers providing cooking and cleaning services at these sites—though she does do some of that work—rather than equal stakeholders. “Why should we go back? This is not just the men’s protest. We toil in the fields alongside the men. Who are we—if not farmers?”

The farm laws supposedly brought in to bring developmental changes in the industry pose serious threats of snatching away the livelihood of farmers. Agriculture in India already suffers from serious loss owing to many deaths of farmers by suicide every year and the new laws leave them at the mercy of buyers and do away with the mandi system where they are assured a minimum set price for certain crops. Although the government is hell-bent on saying that MSP will not be done away with but with the entry of big corporate sectors in agriculture, MSP will be effectively gone in no time breaking the age old system that helps several small scale farmers recuperate from any loss.

Like every other industry, agriculture too suffers from wide gender gap. According to Oxfam India, 85% of rural women work in agriculture but only 13% own any land. Other than working on farm and not getting paid for the same, some women farmers also have to deal with the losses of their husbands to suicide due to bone crushing debts. Women at the protest sites say they were not even aware that they could ask for compensation from the government in case of their husband’s deaths, how will they negotiate with businessmen? Many of these women have never stepped out of their homes let alone led protests and spoken on stage but they are speaking up for their rights and claiming their identities as farmers.

As the protest grows stronger, the government retaliates with violence and illegal detention of protestors and women have been at the sharper end of the sword. Women were arrested and slapped with serious criminal charges denying them benefit of bail. Founders of Pinjra Tod, an organization raising awareness on unfair bondage of women in hostel campuses Devangana Kalita and Natasha Narwal were slapped with terror charges under the draconian UAPA, the anti-terror law in India. While Devangana has been granted bail by Delhi High Court, Natasha is still languishing in jail. Safoora Zargar, a student Jamia University was also charged under the UAPA. She was 3 months pregnant at the time. During the ongoing farmer’s protest as well, women were received with tremendous hate, violence and unlawful incarcerations at the hand of state. Nodeep Kaur, a labour and Dalit rights activist and a member of Mazdoor Adhikar Sangathan from Punjab was arrested for several false cases against her who was mobilizing workers and farmers against the new farm laws. Her family stated that she has been tortured and sexually assaulted in custody. Although granted bail, her medical reports show bruises over her body suggesting custodial torture. Disha Ravi, a climate rights activist from Bangaluru too was arrested under sedition charges for making edits in a toolkit, a resource base for helping protestors at Delhi borders. Her much celebrated bail order acknowledges dissent as a sign of healthy and vibrant democracy.

Women with international recognition who raised their voice on the protest and stood in solidarity with political prisoners were also met with humongous hate from the state and public. Many of them took to twitter to show the hate against them was not just verbal but extended to threats of sexual violence. But undeterred, these women chose to speak up and stand for the principles of democracy and rule of law and will keep choosing that no matter what comes their way. These women are not just fighting state oppression but freeing themselves from the clenches of patriarchy. They are not here to bog down from all that the world and state do to oppress them. They are here to claim their space, claim their identity. To the women of India and the world, The Womb salutes their spirit, admire their courage and is inspired by their grit.