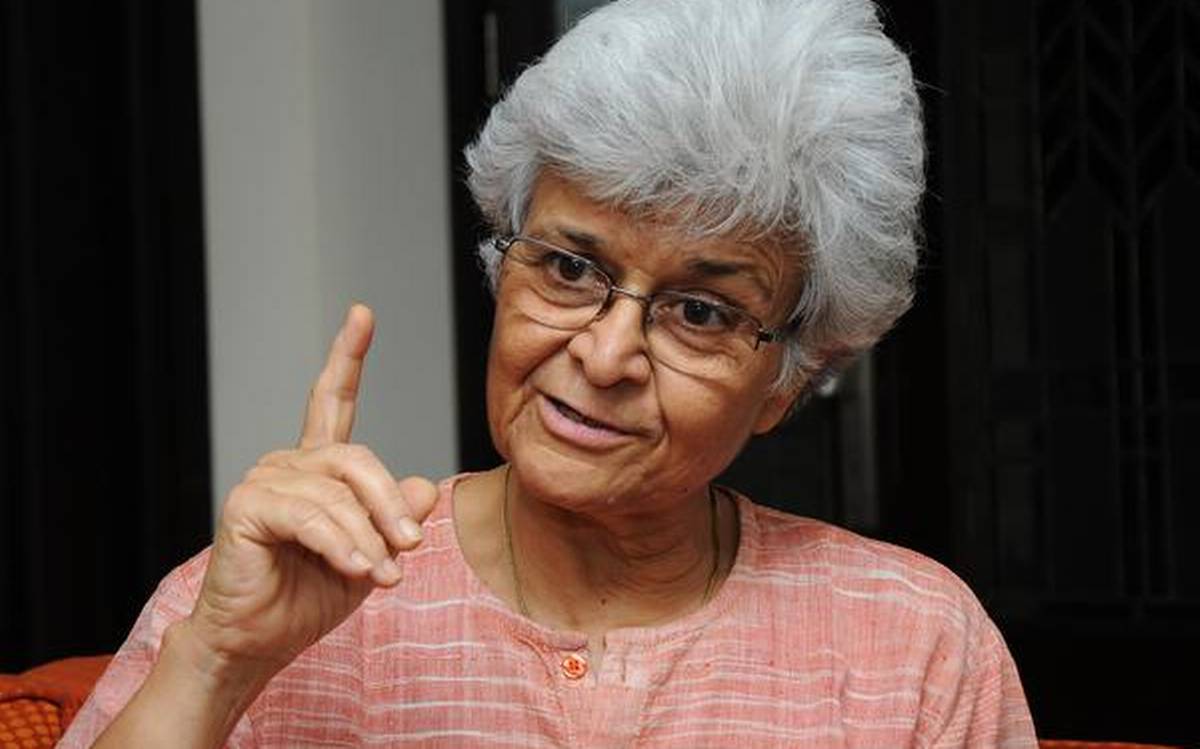 “All human beings are born free and equal in dignity and rights”. These words of Article 1 of UDHR form the principle on which eminent feminist activist, poet and author Kamla Bhasin lived her life on. On 25 September, 2021, people of South Asia woke up to a doleful morning, as she breathed her last at the age of 75. She was diagnosed with cancer a few months ago and passed away at around 3 am on Saturday morning. Activist Kavita Srivastava took to Twitter to share the news of her demise: “Kamla Bhasin, our dear friend, passed away around 3 am today 25th Sept. This is a big setback for the women’s movement in India and the South Asian region. She celebrated life whatever the adversity. Kamla you will always live in our hearts. In Sisterhood, which is in deep grief.”

Born in Shahidanwaalu village (now in Pakistan), Kamla Bhasin referred to herself as one of the ‘midnight generation’ as she took birth a year before partition and making of independent India. Bhasin was a prominent voice of women’s movement in India and other South Asian countries. She is best known for her active work with Sangat, a feminist network working toward gender justice, equality and peace regionally and globally. Her poem, Kyuki mein ladki hoon,mujhe padhna hai is also well-known. As a “social scientist” by training, Bhasin had been actively engaged with issues related to development, education, gender, and media among several others for over 35 years. Bhasin worked with the Food and Agricultural Organization of the UN from 1976 to 2001. She resigned from her job at the UN to work with Sangat, of which she was a founder and adviser. Bhasin also worked with JAGORI, women’s resource and training centre in New Delhi and was an active member of Jagori Grameen in Himachal Pradesh. Bhasin was also the co-chair of the worldwide network, Peace Women Across the Globe and the South Asia Coordinator of One Billion Rising, the biggest mass action to end violence against women, including cisgender, transgender, and those who hold fluid identities that are subject to gender-based violence.

The most recognised and used slogans in recent times for protests amongst young activists is  “The Freedom Song” – Azadi”, Bhasin was the first person to illuminate the streets of India with it. Reportedly, she first heard of the slogan from Pakistani feminists protesting for equal rights in Lahore. Since she first recited the slogan at a conference at Jadavapur University in Kolkata nearly thirty years ago, Bhasin improvised and popularised the slogan over the years, which is now chanted across feminist and youth protest sites across the country. Upon return from her stint with United National Food and Agricultural Organisation in Bangkok, she played an important role in women’s movement that arose after the Mathura rape case where two policemen raped a Dalit woman in police station. The movement led to increasing awareness on aggravated crime of sexual assault by people in authority and brought in significant change in law against the same. Bhasin has written several books and booklets on gender theory and feminism, many of which have been translated into about 30 languages. Bhasin also collaborated with Pakistani feminists and conducted many workshops on women and development on both sides of the border, forging cross-border connections based on friendship, love and sisterhood.

The Womb team member Shivangi had the pleasure of meeting Kamla Bhasin at her alma mater. She describes her meeting with Bhasin as –

“Kamla Bhasin was invited in my University to speak about Feminism and Education. Unlike any other speakers we usually hear in auditorium, Kamla engaged the crowd first with her passionate sloganeering and asked us straight if we have annihilated sexist practices in our day to day lives or are we still carrying it forward by thinking of them as harmless. She made us question gender norms we are still bound by in our modern lives. She made us realise that our so called progressive Institution, full of passionate feminists, lacks the very first step to understanding and progressing in the movement, which is creating a space to read and discuss feminist literature. After the session, I happened to mention that I have written a book about child sexual abuse where I inform adults about the offence and how they can report it. She point blank asked me if I trust our legal system to handle these matters right? The aspiring lawyer in me answered in affirmative but the survivor in me could not be so confident. I had a heart to heart with her about sexual abuse, my own experiences and how I think it can be prevented. She told me about a book she wrote addressing the same issue called “If only someone had broken the silence!”. The relatable anecdotes and encouragement to talk about sex with children hits at the right spot when it comes to preventive measures of sexual abuse in children. We exchanged our books with an unspoken promise of never being silent about sexual abuse and gender discrimination.”

Not so recently, Bhasin was not very well taken amongst the feminists after her caste and trans exclusive remarks on feminism to which she later apologized, but our entire generation owes gratitude for her work in mainstreaming the feminist movement in India and challenging patriarchal norms in households.

The Womb Founder, Avani Bansal shares her memory of Kamla Bhasin as –

“I had been following her work for a very long time on social media and her energy felt infectious. She seemed like a powerhouse who had spent a lifetime fighting for women’s rights and also defied various stereotypes in the way she lived. At her age, she still felt like a fountain of youthful energy. I wrote to her and she wrote immediately back. We got on a call, which was supposed to be for a few minutes, where I wanted to request her if we could interview her for the womb. She agreed, but enquired if the platform is going to talk just about women related issues or include all gender related issues, to which I said it was the latter. That brief conversation was like a rare light bolt that made me think about so many issues and nuances I hadn’t thought about. She also shared about the story of her daughter who she had lost and talking to me she said, she just thought of her and had tears in her eyes. How could I feel so connected to a person I had never met in person, and now, never will? All I got was one conversation with her, but her memory is going to be deeply etched in my memory. Sometimes, all you need is one conversation with the right person – ‘someone who has been there, done that’, for several of your doubts and questions to be melted like they never existed and for your resolve to be renewed. Thank you Kamla ji for touching the lives of so many of us. We are not going to cry but celebrate you.”

Our resolve at the womb, to work for gender issues and continue to provide a platform for strengthening the voices of women and empowering them stands strengthened. This is our homage to Kamla Bhasin. Here’s to sisterhood and creating a truly equal society where our genders do not restrict us, but empower us to be our best versions.