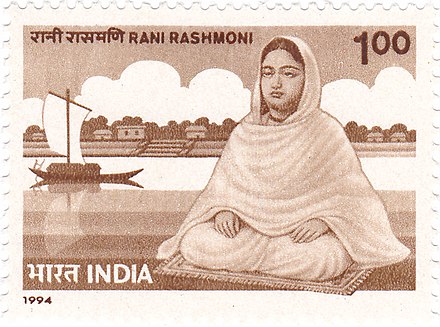 Rashmoni was born on 28 September 1793 in Kona village, (in present-day Halisahar) to the blissful couple Harekrishna Das and Rampriya Devi. Her mother passed away when she was just seven years old. She was married to Babu Rajachandra Das, the wealthy scion of a zamindar-businessman family of Janbazar, Kolkata, when she was just eleven years old. Her loving and understanding husband allowed her unfettered freedom, a trait that was slowly gaining popularity among the Bengali middle-class bhadralok society. The couple had four daughters.

Unfortunately, Rashmoni was widowed after the death of her husband in 1836. The untimely death of her husband and the muck of hetero-patriarchal casteism taught her all that she needed to know about the four-fold oppression (caste, creed, gender, and religion) of lower caste women in India. Despite severe resistance from other male members of the family, she assumed the responsibility of the businesses and finances of the Zamindari family, which was indeed rare for the times that she lived in. She wielded her power for the next 30 years, guided by her keen business acumen, solidarity with the underprivileged, a penchant for litigation, and a remarkable ability to take on patriarchy by its horns.

She had in-a-way defeated the dark undercurrents of deep-rooted patriarchy that existed in the 18th century, by standing up for what she firmly believed was rightfully hers. She went on to judiciously manage the finances and worked tirelessly throughout her life in the service of the underprivileged. The pious and humble homemaker had indeed transformed into a pragmatic and astute business woman. She had finally managed to defeat patriarchy in the Zamindari household.

In the 1840s, the fishing communities in the Bengal Presidency, which had flourished for several centuries, were facing a crisis for existence. Congnizant of the burgeoning business potential, the trading corporation of East India Company, turned its racketeering gaze towards the thriving fishing business in the placid waters of the Ganga. Through the months of February to October, small fishing boats would traverse through the waters of the Ganga, netting in bountiful harvests of the silvery hilsa, a supreme delicacy in Bengali cuisine. Under the pretext that the fishing expeditions impeded the free movement of ferries, the East India Company imposed a tax on fishing boats, a sinister move, that reduced river traffic while raking in extra revenue for the Company.

The anxious fisherfolk, mostly from the Jele Kaibaryta and Malo communities, whose livelihood was at stake, decided to travel to Calcutta and plead their case with the upper-caste Hindu landlords, hoping for their unflinching support for their cause. However, the wealthy landlords who were unwilling to risk souring of relationships with the British officers, turned their back towards the fishermen. Dismayed and demoralized, the fishermen, decided to approach Rashmoni Das, hoping that she would lend a supporting hand to their cause. Rashmoni wouldn’t disappoint and this would be her first battle against the cunning and shrewd ways of the British.

Using her business acumen and her litigation skills, Rashmoni, made the most incredible move which would checkmate the Britishers and be remembered in history books as one of the most remarkable events in the fight against the British’s imperial rule in India.

Rashmoni made an offer to the East India Company to lease out a 10-km-long stretch of the Hoogly river, a distributary of the Ganga. Unmindful of the consequences, the East India Company unwittingly agreed to lease out the 10-km-long stretch to Rashmoni. Rashmoni smarty procured the lease-holding documents and proceeded to place two massive iron chains across the Ganga – at Metiabruz and Ghusuri – where the river arched like a bow and she permitted the fisherman to cast their nets in this barricaded private zone. Once the dinghies flocked the catchment zone, all the large commercial and passenger traffic on the Hoogly river came to a grinding halt.

Flummoxed by the sudden turn of events, the officials of the East India Company, sent out notices seeking an explanation from Rashmoni. The sharp-witted Rashmoni, legally responded citing that as a leaseholder, she was entitled under the British Law, to protect the income generated from her property and that incessant riverine traffic made it extremely arduous for the fisherfolk to cast their nets inside the barricaded area, thus bringing down their profitability. She also subtly warned the British officials that she was more than willing to litigate on the matter and abide by the judicial verdict, if it came to that. With traffic coming to a grinding halt and boats queuing up along the riverfront, the officials realised that they had indeed been outsmarted by Rashmoni as they had very little or no legal recourse to confront her. Eventually, the East India Company gave in to their demands and were forced to withdraw the taxes imposed on the fisherfolk, giving them unfettered access to the entire stretch of the river Ganga. A Bengali shudra widow had outwitted the clueless Britishers using the Anglo-Saxon capitalism’s most potent weapon – “private property”. As if emboldened by this victory, Rashmoni defied the orders of the British when Puja processions were stopped on the pretext that they disturbed peace, which eventually forced the government to withdraw the orders. Thus she had managed to not only outwit the Britishers but had also defeated them and their sinister designs.

Raja Ram Mohan Roy, who was one of Raja Chandra Das’ close associates, on his very first interactions with Rashmoni, had witnessed a keen flame in her eyes. Thoroughly impressed by her compassionate disposition, Raja Ram Mohan Roy blessed her saying “May you dispel the darkness from the lives of hundreds of hapless women. May you live up to your name and become the queen of the masses.” Inspired by the lofty ideals of the Brahmo Samaj founded by the Roy, Rani Rashmoni played a pivotal role in voicing protests against polygamy, child marriage, and wife immolation – a diabolical practice also known as Sati. As a woman, she was instrumental in instigating the East India Company to abolish polygamy. She also tacitly supported Ishwar Chandra Vidyasagar’s campaign for widow remarriage.

Throughout her life, Rashmoni was involved in innumerable charitable works and made significant contributions to society. She pioneered the construction of a road from Subarnarekha river to Puri in an attempt to make the journey less arduous for pilgrims visiting the holy shrine. She funded the construction of ghats such as Babughat (in memory of her husband), Ahiritola Ghat and Nimtala Ghat for the daily bathers in the Ganges. Rashmoni continued donating money for the construction of ghats on the Hooghly. Rashmoni constructed and renovated nine ghats after the passing of her husband, which added significantly to her popular appeal. To the then Imperial Library (now the National Library of India) and Hindu College (now Presidency University), Rashmoni donated large sums of money.

Rashmoni also helped transform the lives of misguided youth and gave them a fresh lease of life. Prince Dwarkanath Tagore had mortgaged a part of his Zamindari in now South 24 Parganas (part of present-day Santoshpur and adjoining areas) to Rashmoni for his passage to England. This part of land which was then a part of the Sunderbans was marshy and almost uninhabitable except for some families of thugs who found the area convenient to stay and venture out for plunders in far away places mounted on stilts. Rashmoni persuaded these families and helped them to build up fisheries in the surrounding water bodies that later turned into large, rich bheris. They gradually gave up their ‘profession’ of plundering and transformed into a community of fishermen.

Rani Rashmoni’s greatest achievement was probably the construction and establishment of the famous Dakshineswar Kali Temple in Kolkata. The turning point in Rashmoni’s life came in 1847 when, guided by a vision of the goddess Kali, she started the construction of the temple at Dakshineshwar, four miles north of Kolkata.

In 1855 an auspicious day was fixed for the installation of the deity at the temple. Since she was a shudra, Rani Rashmoni could not prevail upon any orthodox Brahmin to officiate as the priest for the auspicious ceremony. She consulted many renowned scholars, and one of them, Ramkumar Chattopadhyay, guided her out of the dilemma. She made a gift of the temple to her guru, a Brahmin, and provided funds for its maintenance by purchasing a big estate in Dinapur and endowing the temple with its income. Ramkumar Chattopadhyaya was appointed the priest of the temple, and after him his brother Gadadhar took over. Gadadhar was so thoroughly immersed in the contemplation of Kali that many people thought him mentally deranged. Rani Rashmoni was advised not to appoint him, yet with her intuition and insight she was convinced that his strange ways only showed the intensity of his religious fervour.

Once during the time of worship, Sri Ramakrishna sensed that her mind was engrossed in commercial matters and slapped her on the back. Outraged, the astonished people demanded that she dismiss and punish him. She silenced them by saying that the Divine Mother had illumined her heart through Sri Ramakrishna. A memorial shrine dedicated to her stands in the precincts of the Dakshineshwar Temple to this day.

In fond rememberance of Rashmoni and her humongous contributions to society,

1. An avenue in Esplanade, Kolkata is named after her as Rani Rashmoni Avenue, where her statue is also located.

2. A road is named after her as Rani Rashmoni Road near her ancestral house at Janbazar, Kolkata.

3. A road is named after her as Rani Rashmoni Road at Dakshineshwar.

4. The Department of Post of Government of India issued a postage stamp to memorialize the bicentennial of Rani Rashmoni in 1993.

5. A Ferry Ghat known as Rani Rashmoni Ghat has been built for ferry services in Barrackpore, West Bengal and in Hooghly, West Bengal.

6. One of the 5 Fast Patrol Vessels of Indian Coast Guard has been named after Rani Rashmoni. It was commissioned in June 2018 and will be based in Visakhapatnam (indigenously built by Hindustan Shipyard).

The undaunted flame of hope that Rani Rashmoni was, reached the abode of God on February 1862, aged 68. As a feminist, an activist, a philanthropist, Rashmoni continues to be a beacon of hope in a country where women still feel disadvantaged and have to face oppression in every phase of their lives.

An Oriental and Gender Perspective on Realisation and Creation of Property