Home » Blog » Looking at Item Songs Through a Feminist Lens 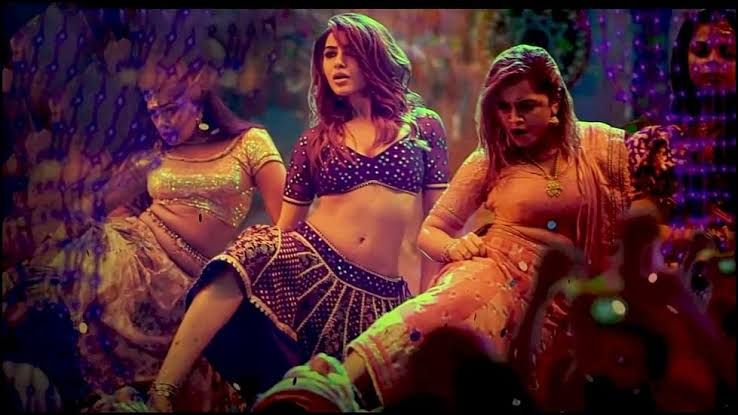 The item song Oo antava Mawa is trending and has become a chartbuster. The song is a part of the Telugu movie Pushpa: The rise, based on the smuggling of red sander trees in Seshachalam Forest, Andhra Pradesh. The song’s lyrics are written by Chandra Bose, featuring the renowned south Indian actress Samantha Ruth Prabhu. It has led everyone to groove to its tune. The trending of this song is based on its lyrics, which had made a departure from the earlier item songs. Unlike the previous item songs, which try to objectify women, the Oo antava Mawa song tries to subvert the objectification of women. However, as the item songs are picturised on the actress, there is a need to critically look at it from a feminist lens.

A pertinent question can be raised, what is the relevance of item songs in a movie? The item songs have always remained a quintessential part of movies. They have been used as a marketing tool to ensure the success of film. The term “item” in itself is derogatory. Generally, the term is used for inanimate objects. At the same time, it is used for young-attractive women with sexist overtones. The Oo antava Mawa song can be viewed as a welcome shift as it has shone a spotlight on women objectification in a “phallocentric” world.

Oo antava mawa…implies that irrespective of girls’ clothes, skin tones, size or height, the men ogle them in a lecherous manner. The song’s lyrics portrayed the inherent sexism and voyeurism prevalent in society. However, the song comes under scanner as it failed to subvert the Male gaze in visuals. In her article “Visual Pleasure and Narrative Cinema”, Laura Mulvey propagated the idea of “Male gaze”. Mulvey argued from a psychoanalytic perspective that films respond to “socophillia“, i.e., pleasure derived from looking at something. Looking at Oo antava song through the lens of “Male gaze”, it appears that the song has been shot to satisfy the desires of the targeted heterosexual male audience. The protagonist of the song has been invariably sexualised and objectified in the visuals.

Women are seen as objects of desire and lust in a patriarchal society. The same image is portrayed on the screen. The protagonist is shown dancing amidst a group of heavily drunk men at a dance bar. The placing of the woman at the dance bar is directed to seduce the male. As Mulvey points out, “Women displayed as sexual objects are the leitmotiv of erotic spectacle; from pinups to strip tease, from Ziegfeld to Busby Berkeley, she holds the look, plays to and signifies male desire.” Samantha, the song’s protagonist, is shown as scantily clothed, with the camera focusing on the fragmented images of her bosom, navel and hips. It is important to note that the men in the visuals were appropriately clad. Certainly, the choice of clothes can never be questioned. What needs to be examined is the camera angle. The close shots are lingering on her perfectly toned and slim body. The lustful eyes of men dancing around are vying for her body. In one such scene, she is shown as lying on the ground and heaving. The camera angle is fixated on her midriff. In another scene, the seductive lap dance moves are picturised erotically. The dance moves are highly sensual and provocative. The sleazy dance moves have been directed to titillate the male audience. Laura Mulvey further argues that men are the active bearer of looks and women are passive objects of men’s desire. This strengthens the image of women as an object of  heterosexual male desires, confirming to the patriarchal norms.

The men dominate the narrative in the Indian film Industries. The lyrics are mostly written and directed by men and even shot from the male perspective. Thus, women are objectified in multiple ways, be it the picturisation, camera angle or costumes. The song’s lyrics that repudiated the objectification of women and the picturisation of  the actress in the visuals are not in consonance as the camera angle has positioned the protagonist from the perspective of heterosexual male spectators. Therefore, the subversion of the male gaze through the lyrics is mere symbolism. Others may call the portrayal of the protagonist in the song as a matter of agency for her. But how is this agency empowering? How can the objectification of women in visuals be empowering? Thus, there is an urgent need to come out of the sexist box way of thinking and depict women in a refreshing manner in such songs.

Indian Documentary Feature on Minority Women in the running for Oscars