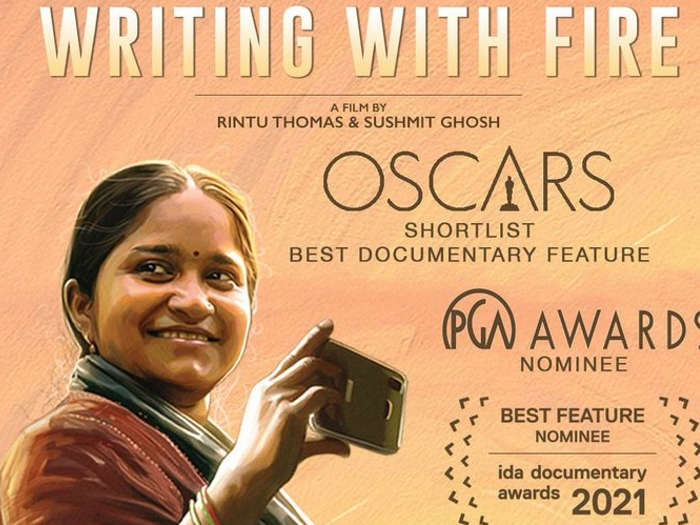 The rousing documentary ‘Writing with Fire’ has made its way to the 94th edition of Academy Awards and deservedly so.

The film throws spotlight on the Dalit women-run newspaper ‘Khabar Lahariya’ in the Bundelkhand region of Uttar Pradesh. It maps the journey of the outlet’s print-to-digital transition. The film has been making headlines since it won the Special Jury (Impact for Change) and Audience awards at the Sundance Film Festival in January last year. It has bagged 28 international awards since.

The film is the labour of love of debut Director-Producer duo, Rintu Thomas and Sushmit Ghosh. In the trailer we see that many of the women have never used smartphones or cameras, and the reporters train each other and exchange feedback in heartening displays of sororal solidarity.

Through the film, Thomas and Ghosh draw our attention to the phenomenal resistance shown by these fierce women. It also traces the jouney of  Khabar Lahariya’s YouTube channel as it rapidly gains followers and its stories achieve realtime results. The women of Khabar Leheriyan not only built rural solidarities but they collectivised. They nurtured leadership in streets which have long been ignored and boycotted by the people in power. It has taken them two decades of relentless work for the mainstream media to notice their soft rumblings that has now taken the nation by a storm.

At a time when the journalism profession faces increasing dangers in India, the work of Khabar Leheriyan depicts the galvanising power of grassroots journalism in bringing real change. The ‘San Francisco Chronicle’, said “Even (Bob) Woodward and (Carl) Bernstein would be inspired by the women reporters of India’s ‘Writing with Fire,” The two American journalists with ‘Washington Post’ had blown the lid off the Watergate scandal in the 1970s, which led to the resignation of President Richard Nixon.

It might be interesting to check out the other finalists in the running with Thomas and Ghosh. The remarkable Chinese-American Jessica Kingdon’s film ‘Ascension’ explores the Chinese Dream; Traci A Curry and Stanley Nelson’s ‘Attica’ delves into the 1971 uprising at Attica prison in New York State; Jonas Poher Rasmussen’s ‘Flee’ is a Danish animated Afghan refugee story; and Ahmir “Questlove” Thompson’s ‘Summer of the Soul (…Or, When the Revolution Could Not be Televised)’ digs into the 1969 Harlem cultural festival.