Home » Blog » Legalise Sex Work; Give Us Ticket To Contest Elections : Demand of Women from the Bachhada Community in MP 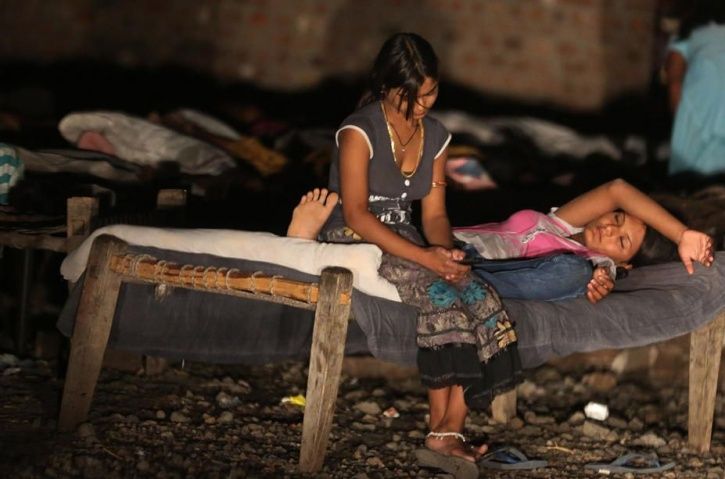 Like many of you, I went to see Gangubai – a latest movie on the life of a sex-worker, directed by the legendary Sanjay Leela Bhansali with Alia Bhatt as the lead actress. I came out of the movie-hall stunned and couldn’t speak a word for two hours post it.

But did you know that in Madhya Pradesh, there is an entire community where women have been practicing sex work for ages? Women of the Bachhada community, which is listed as a Scheduled Tribe community in India, practice sex work, along the highways of Mandsaur-Ratlam-Neemuch, with truck drivers as their major clientele. There are about 23000 people belonging to the Bachhada community, living in over 75 villages in three districts of Mandsaur-Ratlam-Neemuch, a region also famous for the maximum opium production in India, with perhaps one of the highest gender-ratio with 65 percent women.

What do the lives of these women look like? What are the challenges they face? Do they practice sex work out of choice? I had several questions, as I decided to go and meet these women and hear their stories from them. But the foremost difficulty was in convincing these women that they can speak to me, and that I mean no harm. After speaking to several locals and staying in the nearby village for a day, I finally convinced a group of women to speak to us. Here’s what I found.

This may sound almost intuitive but think about it. Every person has a right to minimum wages for the work they do. Even people working in the unorganized sector, such as those working as domestic help, have a right to be paid a minimum wage. But there is no law that covers sex-workers for minimum wages. Women from the community who practice sex-work told me that it all depends on the negotiation power of the girl in question and also the scope of what the client wants in terms of services and can pay in terms of money. Women offer sex work for as low as Rs. 300-400 per client and sometimes have to take multiple clients in one day, to be able to make enough money to survive. Young girls who are virgins can command upto Rs. 2000-2500 for the first time and older women usually get lower prices. Some women reported to take upto 10-12 clients in one day.

When one drives through these villages – Dhodar, Parwaliya in MP along the Mandsaur-Ratlam-Neemuch highway, one comes across several homes right along the highway, with small ‘gumatiyas’ (sheds) where girls sit all day, as an indication of their availability for sex work. When a client approaches them, they will quickly talk about the terms of work and negotiate a price and then take them to a room inside their homes, which is kept for this work. If one drives through this highway in evening hours, it’s almost inescapable to notice a lot of young girls, some looking even under-age, dressed in a slightly offbeat manner for the environment (arguably ‘provocative’). A few locals informed me that the multi-colour lights of their homes at night is also an indication of their homes, but there was no way to test if all homes along that highway with colourful neon lights do indeed belong to sex workers.

While most of the women from Bachhada community, living along the highway do practice sex-work, even those from the community who live in interior villages, do attend to clients. When I asked, how do clients get to know about their villages and how do they find these girls, I was told that most of the information is available online about the villages and once the client reaches the village, he usually talks to a few people before he is finally led to a girl. He can tell the type of girl he wants, and someone in the village, usually helps make that connection.

It’s hard to say if this is true for all women, but those I spoke to were categorical in stating that they do not go out with the clients and do not take on drunk clients. These are two ways in which they ensure that the clients do not behave violently with them or cheat them. But then I was also told that even if sometimes a client does get violent with the girl, she wouldn’t usually come out and talk openly about it. The girls do feel an assurance of their community living around them and can always raise an alarm, if the client tries to misbehave or do something untoward.

Most women are aware of the need for using protection and offer condoms to their clients. But they still run the risk of getting sexually transmitted diseases (STDs) since their clients are truck drivers who are engaging with multiple sex partners over their journeys. There is a local government hospital which offers diagnosis and treatment for STDs.

Sometimes, if a woman does get pregnant, she may choose to keep the child. These children only get their mother’s name and usually no support from the father, as one would imagine. What makes these women opt to keep the child, you may wonder? My sense, after speaking to the girls was that they find their lives very devoid of love and may find comfort in the unconditional love offered by a child – someone they can fully call their own.

In India, we have a strange law that permits women to engage in sex-work, but it is illegal for them or any pimp on their behalf to solicit client, or for any landowner to run a brothel. The governing law – ‘The Immoral Traffic (Prevention) Act’ (commonly called PITA) passed in 1986 was an amendment to the earlier law of 1956 – ‘The Immoral Traffic (Suppression) Act’ (commonly called SITA). The law allow practice of sex-work in private, without legally soliciting clients in public. Along with Indian Penal Code, 1986 the Police often invokes PITA and sections of IPC relevant to ‘public indecency’ or ‘public nuisance’ to conduct raids in the homes of sex workers. Girls and women who I spoke to, told me that the Police often conducts raids and picks away women, charging them under PITA. Sometimes they would even pick girls who are married, and then later would let them go, on being informed of their married status. A lot of times, police let’s go of these women, on grounds of sympathy, knowing that they will have to earn extra through sex-work, if cases are indeed framed on them, for their litigation expense.

In essence, these women constantly live under the fear of police raids, and have no legal rights to complain if a client does something violent with them. The entire practice of their profession is shrouded in mystery, a deliberate one, that reduces these women to legal non-entities.

Hema Chauhan, a woman from Sikhedi village, who was earlier into sex-work but now acts as a Counsellor for women who are into this profession, tells me that a comprehensive law on this issue is the need of the hour. We cannot turn away our faces from the grim reality of the existence of sex-work. Known as the oldest profession in the world, sex-work is unlikely to go anywhere anytime soon. Therefore it is pertinent that atleast the basic human rights of sex workers are protected. This will empower the women from protecting themselves against the fear of police action, and the caprices of their clients. They also need a minimum wage to avoid constant heckling for their right to get a fair wage for their work. Above all, they need respect and to be seen as professionals.

Women, on a lighter note, told me that when there is a marriage in the village, and some of them want to go and attend, they are always met with unapproving eyes. “What choice do we have? The government doesn’t even look at us and there are no schemes for us. How else are we to feed our bellies and that of our families.” I could sense their distress and sadness but what gives me hope is their determination that things will change for the good.

When I ask them – “Will you like to contest elections?” In Uttar Pradesh, for the first time, Congress party gave tickets to 40 percent women under Priyanka Gnandhi’s ‘Ladki Hun Lad Sakti Hun’ (I am a girl, and I can fight) campaign. In Madhya Pradesh, state assembly elections are due next year in 2023. Would some of these women from the Bachadda community consider fighting MLA elections if given an opportunity? The answer was a resounding – ‘Yes’. And why not, why shouldn’t women from the Bachhada community have a pie in power too? Why shouldn’t they themselves be empowered to raise issues specific to them and their communities in general?

If women from the Bachhada community are given political power, it will also send out an important message to over 3 million female sex workers in India that they do exist and should be allowed the same respect in the society like everyone else. It may also ensure that some of the laws and schemes that exist on paper are finally implemented for their benefit. In PITA, for example, there is a provision that the government has to ensure rehabilitation of sex workers, but there is currently no avenue for women who want to leave sex-work to do something else. The Madhya Pradesh government had introduced a scheme to eliminate prostitution amongst Bacchadas in 1998, which was implemented in 2014 with an allotment of Rs. 10 crores annually to Neemuch, Ratlam and Mandsaur. But who does this money go to and what is it used for is still something that the sex workers are not aware of.

There are a few NGOs working with this community for the rights of sex workers but a lot more needs to be done, especially for their rehabilitation. Since the Bacchadas are Dalits, an NGO ‘Udaan’ which is active in the region, calls sex-work as caste based exploitation and helps counsel women who want to leave this profession. In a 2017 petition before the Indore High Court, the Petitioner, one Mr. Chauhan, stated that there are several underage girls too who are forced into prostitution.

Now, the issue of legalizing sex-work is not easy by any imagination with several view-points and sub-issues forming part of it – including the fear of increased trafficking as a consequence if sex-work is legalized. But the question remains – do these women not deserve basic human rights and recognition in law, as per our Constitution? If the Government cannot provide one food to eat and basic means to survive, we can take a moral position for all we like, but we cannot change the reality that these women have to live on an everyday basis.

So, as you read this, do ask yourself – isn’t it time that sex workers to get the respect and rights they deserve? When we say ‘ladki hun lad sakti hun’, it is pertinent to include women from a cross-section of society, especially those who have had a long struggle for ages.

In search of the first woman Chief Justice of India