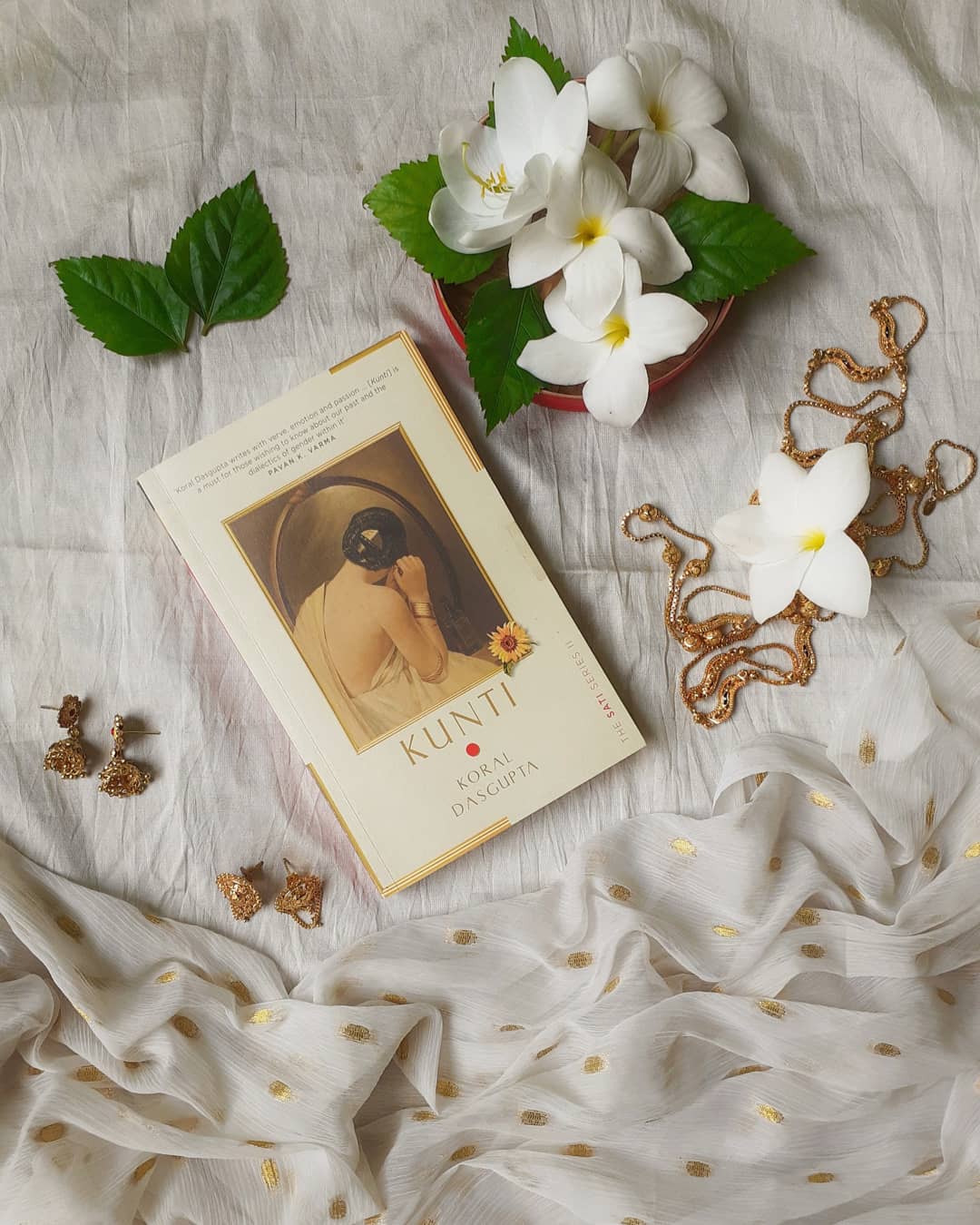 Kunti is the second book in the Sati series authored by Koral Dasgupta. The author has undertaken the task of retelling the stories of Panch Kanyas from Hindu mythology. In her research she has tried to revisit the concept of Sati in the light of different traditions of Indian thought, regional interpretations, and the two great epics- Valmiki Ramayana and Mahabharata of Ved Vyas.

Dasgupta has a mixed approach in this retelling which she describes in the introduction. Firstly, she explains the earliest meanings and representations of the idea of sati through the concept of Panch kanyas or as referred to in the regional interpretations as Maha Satis. She defines sati as a woman with great knowledge and power. She has the faculty to understand history, perceive the current circumstances and create future on the basis of her knowledge. This philosophical interpretation is in stark contrast to the mainstream ritualistic connotations of physical chastity, loyalty, unconditional support, sacrifice and dependence of a woman on her husband, as the markers of a Sati. Secondly, she has tried to unload these traditional and religious baggage to reimagine the personalities and life stories of the Panch kanyas from a feminist perspective. In this sense the author has focused on the making of these characters as contributive to the unfolding and shaping of the epic mythologies.

In the present narrative of Kunti- largely known as mother of Pandavas, the traditional and patriarchal connotations of an Indian mother have been dispelled to narrate an alternative imagery of a woman whose motherhood is informed by the power and responsibilities of a queen with great wisdom of politics, governance and diplomacy needed to maintain and expand a state.

The author uncovers the story of Kunti as an inquisitive child, an adolescent engrossed in cultivating her faculty in different spheres of knowledge, ranging from metaphysics, mathematics to astronomy and astrology and as a young lover, desirous of Indra. Thus, Kunti can be seen as an ambitious human being who wants to uncover the truth of universe and is also desirous of the love of king of Devas. Her brilliance and inquisitive search results in the boon by Rishi Durvasa that goes on to play an instrumental role in the shaping the course of history of the world around her.

Thus, it can be said that the story of Kunti becomes a footnote to the epic of Mahabharata when seen from patriarchal lens. The abandonment of Karna has writ itself large as her character of a cruel and calculative mother. However, a retelling of kunti’s story from her own perspective brings in her thoughts and experiences that have been overlooked for patriarchal conveniences. Her intellectual agency, her inclination towards administrative matters of state, her empathetic conscience towards her husband and her love are those elements of Kunti’s life vis-a-vis different masculine characters in her life that makes her the agent of her own life rather than a follower.

This retelling of Hindu mythology from a historical and sociological perspective may be traced back to the work of Iravati Karve and her work Yuganta– a retelling of Mahabharata from a non -religious and non-reverential perspective only to bring the text closer to the lives of people in more than one way. Also, in the present context of institutionalization of homogenous meanings of epics, cultural traditions and religion at large, such retellings are needed to maintain the liberal traditions of plurality of thoughts and emancipatory aspects of cultural sphere.

Marital Rape – Let’s Talk of it

In Conversation With Two Generations of Women At Lamahatta

She Took Our Breath Away…..