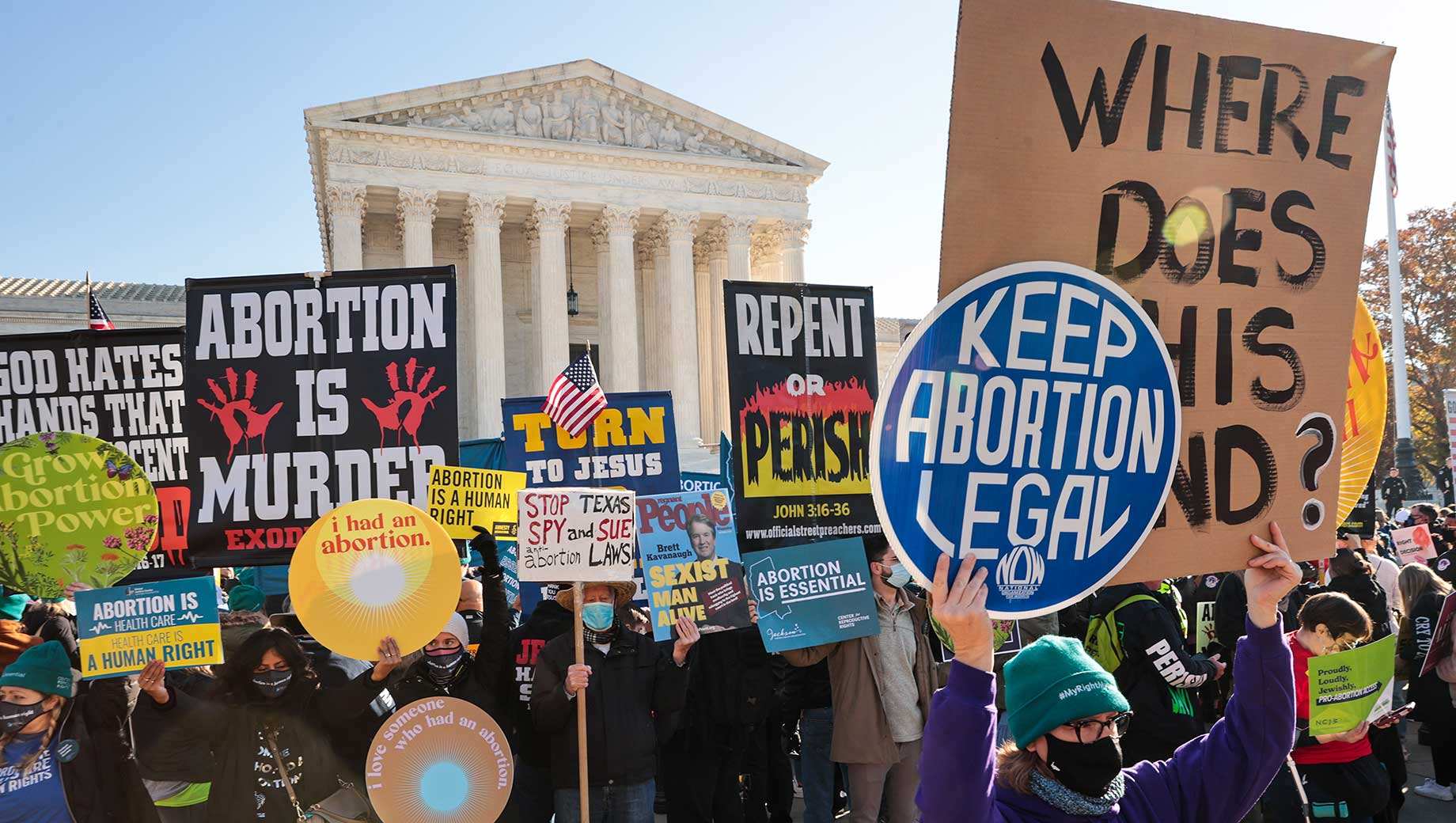 Supreme Court of United States on 24th of June, 2022 decided Dobbs v. Jackson Women’s Health Organization (“Dobbs”) and ruled in favour of the state of Mississippi which was seeking invalidation of the 50-year-old precedent of Roe v. Wade (“Roe”), protecting the constitutional right of abortion. After a federal district court ruling granting permanent injunction against the ban on abortion in the state of Mississippi was upheld by the Fifth Circuit Court of Appeals, SCOTUS turned the clock back on the right to abortion stating that the Constitution of United States does not confer the same.

The right to abortion globally and especially in the United States has always been controversial and has been at the center of ideological politics in the country. The Constitution of United States is designed to enshrine and protect individual rights of its citizens but which citizens are worthy of protection are controlled by the politicians and their ideologies. Most Democrats have been pro-abortion rights as opposed to the Republicans. After Brown v. Board of Education, Republican leadership shifted to more family and faith social-political issues and following the same, Nixon ran on a pro-life ticket attracting catholic voters enabling him to attack his Democrat opponent George McGovern who had allied with feminists and the Equal Rights Amendment Movement in the 70s. Conservative Activist who campaigned against the ERA movement and denounced abortion garnered support around Nixon’s traditionalist anti-choice campaign. Former President Ronald Reagan who passed a liberal abortion law as governor of California flipped his stance on the topic during his presidential campaign. His advisers apparently were the first to see possibilities of uniting conservative Catholics and evangelical protestants using abortion and gaining a voter base and formally endorsed the religious right’s efforts which included restricting abortion. However, the constitutional support to abortion had already been granted by SCOTUS in 1973 by passing the landmark Roe v. Wade which Reagan openly disagreed with. In his first two years of office he worked closely with congress to introduce bills that would recognize unborn as human being to be protected under the Fourteenth Amendment and prohibiting abortion. Decades later, the Reagan’s legacy was carried on by none other than Donald Trump.

Somewhat like President Reagan, Donald Trump too shifted dramatically on the issue of abortion. In an interview to NBC in 1999, Trump had called himself very pro-choice only to turn his back one and a half decades later as a presidential candidate announcing that he is pro-life repeatedly promising appointing anti-abortion judges. In the final debate with Hillary Clinton in 2016 general elections, Trump had categorically announced appointing pro-life judges and just like Thanos, he did what he said he would do with his powers and nominated anti-abortion conservative judges. 3 out of the 6 majority justices in the Dobbs judgment are Trump nominees.

As soon as the judgment was pronounced, several US states jumped to outlaw abortion. Attorney General of Missouri wasting no time announced his paperwork ending abortion in the state. Many states like Kentucky, Louisiana, South Dakota already had laws criminalizing or restricting abortion that kicked in as soon as the federal protection provided by the overturned judgements became nil. Most of these states anyway had very few abortion clinics which had temporarily stopped performing abortions due to the looming fear of overturn, and now effectively stopping access to proper abortion care. States where abortion is legal are in an acute minority and although travel for abortion is not illegal (yet), restriction on the same cannot be overruled.

Dobbs judgment scrutinizes the stare decisis of Roe v Wade and Planned Parenthood v. Casey (“Casey”) through a very narrow understanding of constitution and mostly on moral grounds giving barely any consideration to the rights of women and consequences of overturn. Justice Alito criticizes Roe for being decided on constitutionally irrelevant history and incorrect interpretation of Constitutional rights. The majority opines that any right to be read under the constitutional amendments must be “deeply rooted in this Nation’s history and tradition” which as we gathered from the politics of abortion, it is not. The judgment further goes on to rule that doctrine of stare decisis does not counsel continued acceptance of Roe and Casey. It classifies 5 reasons why precedents of Roe and Casey should be overruled, which are a) nature of Court’s error as Roe was egregiously wrong and the court in Casey short-circuited the democratic process by closing it to the large number of Americans who disagreed with Roe; b) the quality of reasoning as Roe failed to note consensus of state laws and why sources relied by them shed light on the meaning of Constitution. It conflated the right of privacy and Casey refrained from endorsing most of Roe’s reasoning and instead grounded it on the due process clause of the fourteenth amendment and providing no new support to the abortion right; c) workability of the precedent as Roe and Casey did not prove to be consistent and predictable and the “undue burden” test was imprecise, ambiguous and gave lots of discretionary power to judges undermining the precedent and not advance it; d) effect on other areas of law as the two judgments distort unrelated legal doctrines and lastly e) reliance interests that overruling these cases won’t upend reliance interests like in those cases involving property rights etc.

As the right to abortion was brutally killed by irrelevant moral and conservative arguments, the dissent rose to record the catastrophe of this judgement stating that the majority has overruled Roe and Casey out of despise and has substituted a rule by judges for the rule of law.  The dissent opinion has pointed out the importance of right of women to be autonomous beings and possessing the right to take decisions with respect to their bodies and the procedure they want to put themselves through. The majority has trivialized women and their autonomy by imposing substantial obstacles and allowing states to make laws that can force women to bring a pregnancy to term even at the steepest personal and familial costs. It also points out the dangers of some state laws extending to all forms of abortion with no exceptions to even victims of rape and incest. Criticizing majority’s argument that right to elect abortion is not deeply rooted in history, dissent writes that in doing so, majority consigns women to second-class citizenship. It quotes that “It was settled at the time of Roe, settled at the time of Casey, and settled yesterday that the Constitution places limits on a State’s power to assert control over an individual’s body and most personal decision making. A multitude of decisions supporting that principle led to Roe’s recognition and Casey’s reaffirmation of the right to choose; and Roe and Casey in turn supported additional protections for intimate and familial relations. The majority has embarrassingly little to say about those precedents”.

Access to abortion care has never been easy given the heavy political influence on the issue in America but with the protection of Roe and Casey, not only did it keep the people exercising their right from going to jail and be a felon but also to expand that access not just to women but to people of colour, different sexual orientations and genders. People with uteri had constitutional protection to right to their own bodies without governmental interference into their personal decisions, and had options, for which they won’t be put behind bars. But now that protection no longer exists, there are innumerable threats that loom over America. Trigger bans have already come into effect and now there will be laws banning pre-viability gestation, methods of abortion, reasons etc. substantially making abortion at any stage inaccessible. There will be targeting of abortion care providers by putting them under strict rigours of law to make the process legally extraneous and burdensome effectively killing even the permissible abortion too. The right to abortion as a right privacy as hailed by Roe will suffer a tremendous blow as people fear excessive parental involvement, biased and inaccurate counseling before abortion affecting consent after this overturn. The fear of state and private companies snooping into phones through period tracking apps has also been raised by many.

Misogyny is ‘deeply rooted in the history’ of most developed countries and there are people in authority who believe in forwarding the same. The politics of abortion has barely any relation to people (read cis white men) who played it to achieve their political goals. But the same ensured that not only the rights of women are in their hands, but even after waves of feminism and progressive movements, they can turn back the time to dark ages. The right to abortion now is at the mercy of state constitutional protection and public funding. God has saved the fetus, who will save America!

“Don’t let anyone stop you”