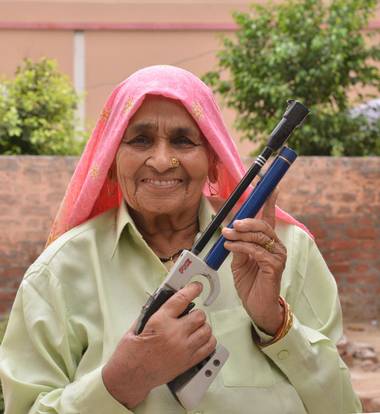 Chandro Tomar, nicknamed Shooter Dadi (‘Dadi’ meaning “grandmother” in Hindi) (10 January 1932 – 30 April 2021), was an octogenarian sharp shooter from the village of Johri in the Bagpat district in the Indian state of Uttar Pradesh.

Since learning to shoot in 1999 when she was already in her 60s, she had attained national fame as an accomplished shooter, having won more than 30 national championships. She was referred to as the oldest (woman) sharpshooter in the world and a “feminist icon.”

Tomar never attended school and married at age 15. She was over age 65 when she began her sharpshooting career, and was derided and laughed at when she first began attending professional competitions. Tomar recalls her husband and his brothers at first being angry and opposed to her participation in competitions, but she decided to continue. Her daughter and granddaughter joined the shooting team, and Tomar encouraged other families to allow their daughters to join.

Tomar has five children and twelve grandchildren. She began learning to shoot by chance, when her granddaughter Shefali wanted to learn how to shoot at Johri Rifle Club. Her granddaughter was shy to go alone to an all-boys shooting club. and wanted her grandmother to accompany her. At the range, Tomar took a pistol when her granddaughter could not load it and she started shooting at a target. Her first shot resulted in bull’s eye hit. The club coach, Farooq Pathan, was surprised to see her shoot so skillfully. He suggested she join the club and get trained to become a shooter, which Tomar did. Her trainer commented: “She has the ultimate skill, a steady hand and a sharp eye.”

In 2021, Tomar told The New York Times that her strength and agility is from “All the household chores I used to do from a young age, like grinding the wheat by hand, milking the cows, cutting the grass, It’s important to stay active. Your body might grow old, but keep your mind sharp.”

Her niece Seema Tomar, also a sharp shooter, was the first Indian woman to win a medal at the Rifle and Pistol World Cup in 2010. Her granddaughter, Shefali Tomar, achieved international shooter status and has taken part in international competitions in Hungary and Germany; both of them credit Tomar for the positive encouragement provided and praised her sister Prakashi Tomar for advising them.

Since 1999, Tomar had competed in and won over 25 state and larger championships throughout India. She won a gold medal at the Veteran Shooting Championship conducted in Chennai. Her success has encouraged the local people to take up shooting as a useful sporting profession, including her granddaughters. Tomar died from COVID-19 on 30 April 2021.

“Don’t let anyone stop you”