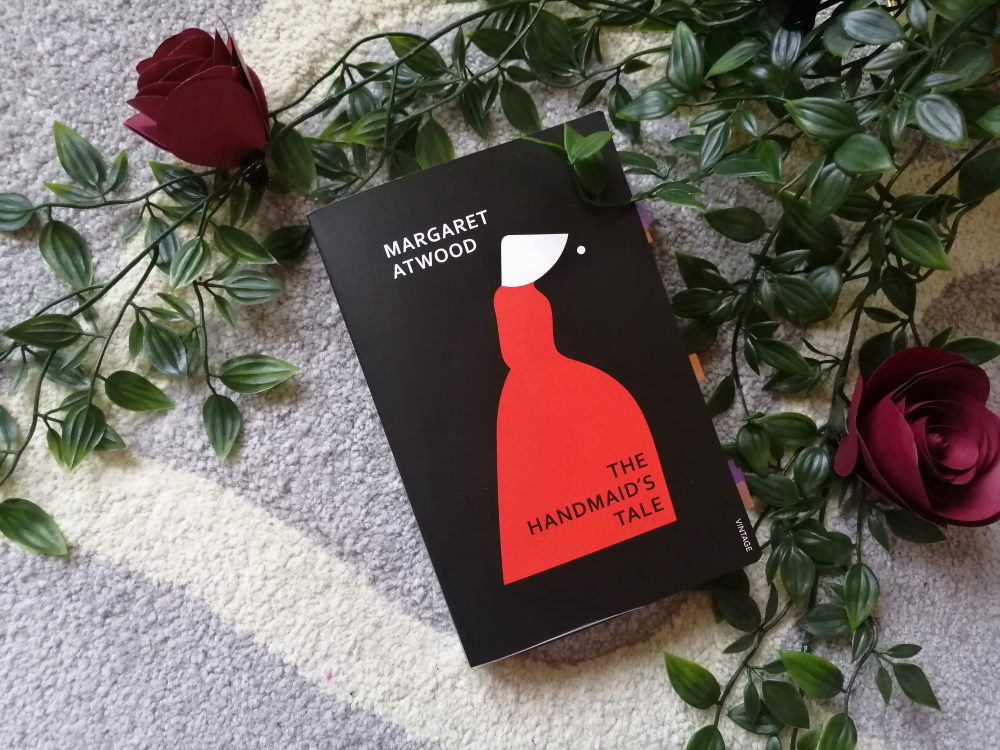 Écriture féminine, or “feminine writing”, a term coined by Hélène Cixous in 1976, challenges phallocentric language and bravely puts forth the notion that feminist writings are better developed by female writing by the virtue of perspective. Such a convincing, direct and artless perspective is provided by Margaret Atwood through the protagonist of The Handmaid’s Tale, Offred, a woman living a life of total subservience, stripped of her identity and rights, in the fictional totalitarian regime of Gilead. A strange moral tale that transcends time is an exemplary model of “speculative dystopian fiction”, Atwood’s métier, which wraps you up in a sinister world that seems just within sight.

It must be noted, before moving further, that Atwood penned this story as she witnessed radical socio-political changes around her. Gripped by anti-nuclear protests, backlashes against the Second Wave of Feminism, the advent of a conservative party in the Congress and growing strength of right-wing Christian groups, battle lines were drawn all across the map of USA. The dystopia was nothing but an inch-perfect rendition created out of the concerns that dwell deep in Atwood’s consciousness. Such clashes ring true in today’s world as well, ergo, unavoidable parallels can still be drawn between the real world and the world of Offred.

The female persecution and marginalization is a recurring motif in the work, making it impossible to not apply a feminist critique to it. Atwood sparks dialogue about the representation of women, the patriarchal assumptions to female freedom, gender stereotypes and uncovering the message these same provide.

“Sanity is a valuable possession; I hoard it the way people once hoarded money. I save it, so I will have enough, when the time comes.”

The patriarchal tyranny in Gilead victimizes and oppresses women, pushing them to turn into lifeless bodies non compos mentis. The military regime of Gilead takes away a woman’s right to own property, earn, marry, bear children, education and abortion. The narrator and protagonist of the story, Offred, was captured and forcefully made a “Handmaid”, a name taken by the biblical story of Rachel and her handmaid Bilhah, who is supposed to rear children for high ranking officers or the “Commanders”. The absence of her identity is shown in the conception of her name itself, and amalgamation of the words “of” and “Fred”, the latter being the name of the Commander she was assigned to. Every handmaid is given names in the same manner by the State and the real name of the narrator is not disclosed to the readers. This absence of simple utterance of one’s own name shows how strictly women were monitored and expected to forget about their past identities.

There was strict classification and ranking among women, which laid down the duties and freedom provided to each women, according to a dress code. Ranked lowest to highest, widows in black, young girls in white, the “Econowives” (domestic workers) in stripes, the Marthas (maids and cooks) in green, the Aunts (trainers for Handmaids) in brown, the Handmaids clad in red with white veils and the Commander’s wives in blue. They are recognized and treated by the State according to the color of their clothes, an important determinant of their identity. Moreover, sterile or old women, unmarried women, feminists, widows, lesbians, nuns, and rebels are sent away to “the Colonies” as they are deemed “Unwomen” or incapable of social cohesion by the State. This system not only replaces religious and racial segregation we see in the modern day that compartmentalizes people to fit certain roles against their wills but also is a near replica of the archaic form of slavery, unfortunately made a reality in the modern-day setting of the text.

This oppression is also to the disadvantage of many poor, marginalized men. The State oppresses in two ways, by constant usage of a certain type of language that brainwashes them into following self-persecuting ideals, and by actions or violence, a harsher and direct way to subjugate.

The re-population program of Gilead is backed by the literal interpretation and preaching of biblical text, enabling state-sanctioned rape and taking away abortion rights. Women in Gilead are merely seen as baby-making tools and their fertility allows the State to make surrogates mothers out of them. These children are then not allowed to be with Handmaid’s and are given away to the military-class couples. Pivotal to the whole process is a spine-chilling sexual act known as the “Ceremony”, that requires Offred to lie between the legs of Fred’s wife, as a symbol of a substitute womb, and copulate with the Commander in that position on the chosen days of her menstrual cycle.

“Modesty is invisibility…Never forget it. To be seen—to be seen—is to be…penetrated. What you must be girls, is impenetrable.”

Any citizen’s sexual orientation is not respected, valued or protected by Gilead. Women are required to be constantly covered or dressed “modestly” according to the State. It also starts a discourse on queer rights as we see Moira, a friend of Offred, being subjected to a heteronormative life. Heterosexuality is a default for the people of Gilead.

Constant Surveillance and Repression of Freedom of Thought and Expression

“Knowing was a temptation. What you don’t know won’t tempt you.”

“The eyes”, a secret police of Gilead that crushes dissent and enables public paranoia, constantly surveys the society and citizens. The eye is a hauntingly pervasive symbol that is also tattooed on every handmaid’s ankles so as to remind them they cannot escape the State. The protagonist is treated as “national resource” and her body is owned and monitored at all times. There is no privacy or freedom of thought and expression in the land of Gilead. Education is not accessible to women to prevent them from interpreting the Bible, used as a tool of subjugation, and from thinking about anything other than what the State requires them to.

Gilead not a Far Cry

At a glance, Handmaid’s Tale may seem a remote reality that will never jump out of the pages to life. In many countries of the world, like Saudi Arabia, women are still denied basic human rights. Inhumane oppression still remains a reality in many countries like Syria. Constant surveillance and lack of freedom of thought and expression is the order of the day in countries like China. Women are legally denied rights to abortion in USA and perpetually expected to have babies by the society in India. Deeply embedded patriarchal norms enable state-sanctioned abuse and injustice to women, marginalized communities, non-binary genders, people of different sexual orientation, and many other groups pushed to the sidelines. The question is not how distant the world is from Gilead, instead it is how many of Gilead’s characteristics we have already adopted and put to work.

If we take a closer look at India, almost every household has a phallocentric distribution of power. The government does not actively provide queer, women, or non-binary gender rights. The apparatus of democracy remains highly corrupt, inefficient and insensitive towards marginalized and oppressed communities. Targeted and influential political campaigns coupled with constant surveillance of the dissenters, whether online or real life, and their persecution is not unknown to our society. Religious fundamentalism has not only entered the belief systems of the uneducated and unaware, but also the educated class of the country. As the third wave of feminism and libertarian movement paves the way for socio-political changes in the society, we edge towards a counter-attack, like the one in 80s by Reagan, backed by a conservative government and religious fanatics. A poorly fashioned dummy of Gilead, perhaps capable of being spotted only in hindsight, is not a distant reality.

Lack of exciting progression does not dampen the intensity of the plot, just like an unreliable narrator does not augment confusion or halt lucid storytelling. Not only will the words between these pages tell a tale like no other, Atwood brilliantly slows down and allows the reader’s mind to wander off with the protagonist and find meaning between the same lines. Gripping, poignant, haunting and thought provoking, The Handmaid’s Tale is more than just a book, it’s an education. We will hopefully always go back to this text to realize the need to question the system and remember, as Atwood put it, “Don’t let the bastards grind you down”.

Finding A Unified Political Voice: Women Need To Assert Themselves