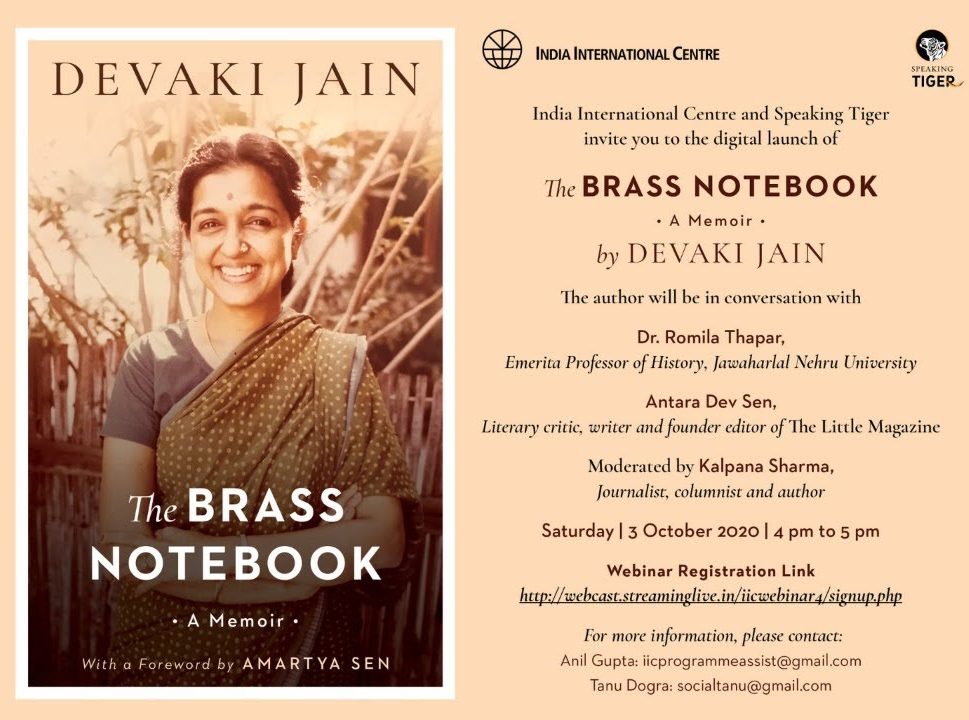 Speaking Tiger announced the publication of The Brass Notebook: A Memoir by Devaki Jain. In this no-holds-barred chronicle, renowned feminist, economist, and academician Devaki Jain recounts her own story and also that of an entire generation and a nation coming into its own. Rich in personal and political history, the book also features a foreword by Amartya Sen.

Reflecting on the telling of the story, Devaki Jain said, “It was difficult to reveal my personal life, but because I felt that my story could be a source of strength for many women, I decided to share both my political engagements and my personal adventures.”

Announcing the release, Renuka Chatterjee, VP Publishing at Speaking Tiger, said, “The Brass Notebook is everything a good memoir should be: racy, candid and full of fascinating anecdotes about the rich and famous as well as the poor and downtrodden. Devaki Jain’s work as a feminist and economist is an inspiration for all of us, just as her personal life makes for a great story!”

The book is currently available on Speaking Tiger’s official website, on Amazon India pre-order and will soon be available through leading bookstores.

The Brass Notebook begins with Devaki’s childhood in South India, a life of comfort and ease with a father who served as dewan in the Princely States of Mysore and Gwalior. But there were restrictions too, that come with growing up in an orthodox Tamil Brahmin family, as well as the rarely spoken about dangers of predatory male relatives. Ruskin College, Oxford, gave her her first taste of freedom in 1955, at the age of 22. Oxford brought her a degree in philosophy and economics—as well as hardship, as she washed dishes in a cafe to pay her fees. It was here, too, that she had her early encounters with the sensual life. With rare candour, she writes of her romantic liaisons in Oxford and Harvard, and falling in love with her ‘unsuitable boy’—her husband, Lakshmi Jain, whom she married against her beloved father’s wishes.

In her professional life she became one of the true change-makers of modern India, working closely with revolutionaries like Vinoba Bhave and his ‘bhoodan’ movement, and Jayaparakash Narayan. In the international arena, she joined cause with the concerns of the colonized nations of the south, as they fought to make their voices heard against the rich and powerful nations of the former colonizers. Her work brought her into contact with world leaders and thinkers, amongst them, Nelson Mandela, Desmond Tutu, Henry Kissinger, Amartya Sen, Doris Lessing and Iris Murdoch, her tutor at St Anne’s College, Oxford, who became a lifelong friend. In all these encounters and anecdotes, what shines through is Devaki Jain’s honesty in telling it like it was—with a message for women across generations, that one can experience the good, the bad and the ugly, and remain standing to tell the story.

Devaki Jain graduated in economics and philosophy from St Anne’s College, Oxford and is an Honorary Fellow of the college. She is a recipient of the Padma Bhushan (2006) and an honorary doctorate from the University of Westville, Durban, South Africa.

PRAISE FOR THE BOOK

‘Your heart and world will be opened by reading The Brass Notebook, the intimate and political life of Devaki Jain, a young woman who dares to become independent even as her country of India does. Because she is also my oldest friend, I can tell you there is no one like her, yet only here in her writing have I learned the depth, breadth and universality of her adventures.’

‘A riveting account of the lifestory of a courageous woman who has all her life challenged what convention expects of her.’

‘Devaki Jain was among those who initiated Indian women into recognizing their rights in society, and in asserting a visible presence, discarding their earlier imposed invisibility. When such a woman writes, inter-leaving her personal and public life…then what she has to say is not just a memoir, it is an event.’