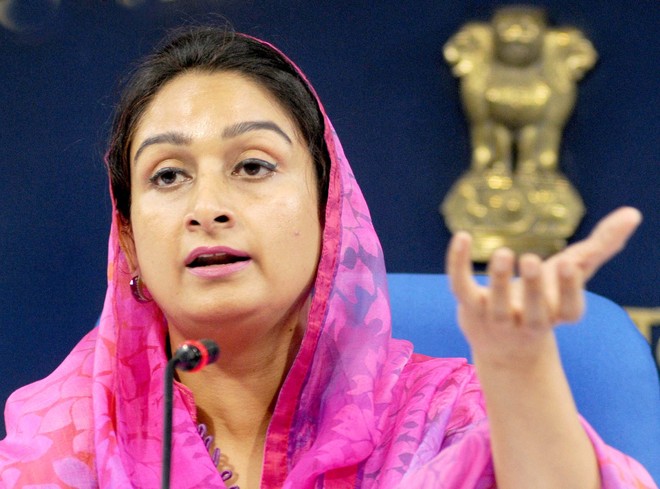 A senior leader of Shiromani Akali Dal (SAD), Harsimrat Kaur Badal resigned from the Union cabinet on 17th September, 2020, after her husband and SAD president Sukhbir Singh Badal opposed the farm bills in Lok Sabha. The most astounding thing about this was that the announcement of her resignation from Narendra Modi cabinet in Parliament was made by her husband, and not herself.

Sukhbir Badal concluded his speech in the Lok Sabha saying, “I want to make an announcement that our minister Harsimrat Kaur Badal will resign from the cabinet.”

It came as a statement as to who was the boss in an attempt to convey a message to the protesting farmers in Punjab.

The question which led to much speculation is whether she really resigned over the farm bill or with an eye on the upcoming elections in Punjab?

The three controversial Farm bills – The Farmers’ Produce Trade And Commerce (Promotion And Facilitation) Bill, The Farmers (Empowerment and Protection) Agreement on Price Assurance and Farm Services Bill, and The Essential Commodities (Amendment) Bill — were passed by the Parliament in the recently concluded Monsoon session. They have been in a pipeline for a long time, during which the Shiromani Akali Dal did not make a noticeable demonstration. So why resign now?

The instant reason is the growing protests by farmers in Punjab and Haryana. Though this protest is not being done by all the bodies of the farmers. Some groups, particularly from Maharashtra are very vocal in supporting these bills.

These farmer bodies termed the bill as “the first step towards financial freedom for farmers” while Sukhbir Badal said that these bills will “destroy” all the good work done by the successive governments in Punjab. In Punjab, the ruling Congress party is strongly opposing the bill and taking out a “khet Bachao” rally.

Coming back to the SAD leader, Harsimrat Kaur Badal, she told media houses that she feels “saddened” that her voice in support of farmers was not heard and she also demanded that government should legislation and should have a wider consultation.  She said, “If my voice had been heard, farmers would not have come out on roads to protest.”

On her resignation, she said, “Please don’t see this as a resignation, as this was my duty as a representative of Punjab and of farmers.”

Describing her tenure as minister, she said,  “it is a remarkable and most memorable period of my life.” She further added that she was satisfied that the NDA-led government delivered on many critical and long-standing issues of the Sikh community, including justice for 1984 riots victims.

Although, Congress and several other opposition parties are opposing this, but SAD is the only NDA member who came out against these bills.

When asked if SAD would pull out of the NDA as well, she said that it will be decided by the party and a collective decision would be taken on that issue by all the senior leaders of the party together. The assembly elections are due in Punjab in 2022.

As per the current set-up, the BJP contests from 23 states in Punjab, while SAD contests from 94 out of 117 assembly constituencies. Now, BJP is urging for equal share risking claim to 59 seats in alliance leaving 58 to SAD, which is the oldest companion of BJP in NDA.