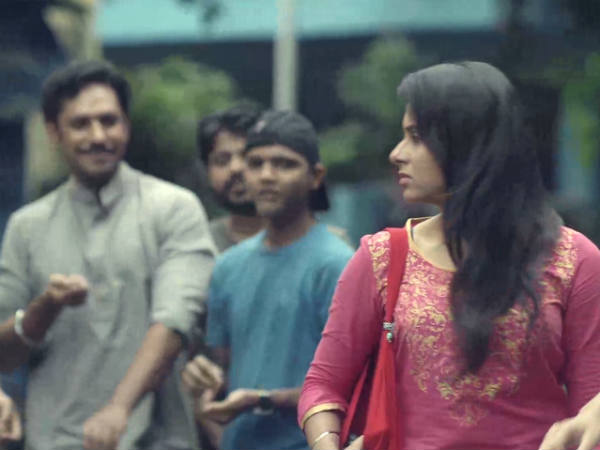 In its recent judgement the Special POCSO Court at Borivali Division, Dindoshi, Mumbai has observed that “using the term “item” to address any girl is obviously insulting in nature. The accused having addressed her by using the term “item” which is a term used generally by boys to address girls in a derogatory fashion as it sexually objectifies them, the same will indicate his intention of outraging her modesty. Such offences need to be dealt with a heavy hand as a lesson needs to be meted out to such roadside Romeos, to protect the women from their uncalled-for behaviour.” In the course of arguments, the learned Assistant Public Prosecutor has also submitted that “a sentence sufficient to send out a proper message to the society at large should be imposed upon the accused as people like him make the lives of the girls miserable, by teasing them and touching them inappropriately when they walk on the road.”

THE FACTUAL MATRIX OF THE CASE

In the instant matter, the accused man pulled the hair of a 16-year-old girl, and said “kya item kidhar ja rahi ho?” It was alleged that the accused used to habitually tease the girls of the locality and used to consistently follow the victim when she used to go to and fro the lanes passing offensive comments and looking upon her with an evil eye. Even after the victim has explicitly told the accused not to do so he did not pay any attention to her words. Initially, the victim tolerated such behaviour of the accused as she did not want the matter to escalate into a fight, thereby not informing her family members about the harassment being suffered by her at hands of the accused. However, on a fateful day while she was returning from her school and walking through a lane when the accused who was sitting with his friends in the lane came behind her, pulled her hair and said “kya item kidhar ja rahi ho?”. The victim girl mustering courage reacted and gave a call to the number 100 from the spot. Even though the police reached the spot within a short period, by that time, the accused had run away from the spot. However, she didn’t lose hope, went home and informed her father about the incident and lodged an FIR against the accused for the offences punishable u/s.354, 354-D, 504, 506 of the Indian Penal Code, 1860 and u/s.12 of the Protection of Children from Sexual Offences Act, 2012. Thereafter, necessary inquiries had been made with her, her statements were recorded before the learned Metropolitan Magistrate and charges against the accused were framed, subsequently.

STAND OF THE PARTIES

The accused pleaded not guilty to the charges framed against him and claimed to be tried. It is not out of place to mention here that the major defence put forth by the accused was that of false implication. The accused contended that the victim and the accused were friends since before the incident in question and that a false report had been lodged against him as their friendship was not liked by the parents of the victim. However, the accused has neither examined himself nor any witness in support of his contentions. In this regard, the learned Advocate for the accused has also pleaded that as no other crime has even been registered against the accused and considering that he is a young boy whose whole future lies ahead of him, a lenient view should be taken.

Per contra, the learned Assistant Public Prosecutor has pointed out that a sentence sufficient to send out a proper message to the society at large should be imposed upon the accused as people like him make the lives of the girls miserable, by teasing them and touching them inappropriately when they walk on the road. Here it must be noted that upon being examined the victim who happens to be the sole and primary witness of the case deposed that before the incident in question which had resulted in the lodging of the report, the accused used to continuously follow her and used to address her by using word “item”. She also went on and assert that the accused always used to pass comments whenever she used to pass through the area near her house and that on the day of the incident, the accused had come behind the victim, pulled her hair and had then said, “ae item sun na.” As per her testimony, she also pushed him and told him not to do so whereupon the accused started abusing her and said that she could do what she wanted and “tu mera kya ukhad legi?”

STAND OF THE HON’BLE COURT

While reaching the conclusion and evaluating the merits of the arguments advanced on behalf of the parties, the Court out rightly rejected the contention as advanced on behalf of the accused as there was no evidence on the record to support the said contentions. On the other hand, it was pointed out that to bring home the offence under section 354 of the Code, the prosecution is required to prove the fact of the accused having either assaulted or used criminal force on a woman with the intention to outrage her modesty or with the knowledge that the said act would likely outrage the said modesty of the victim and in the light of the peculiar facts of the case in hand, the fact of the accused having intentionally caught hold of the victim’s hair and having pulled it, as also of the calling her an “item”, will certainly go to prove the fact of the having outraged her modesty. The Court went on to reason its stand observing that “the victim and the accused not being related in any way and not being in any kind of relationship, it was wholly inappropriate of the accused to act in the way in which he did, which act qualifies as using criminal force to her. Further, the accused addressed her by using the term “item” which is a term used generally by boys to address girls in a derogatory fashion as it sexually objectifies them. the same will indicate his intention of outraging her modesty.”

It is also notable that other contentions were also raised by the accused on some technical grounds, for instance, a contradiction has been sought to be created on behalf of the accused regarding the time of the occurrence of the incident but the same was rejected. Further, it was pointed out that none of the policemen who dealt with the crime in question had gone to the spot and executed the spot panchanama or even recorded the statement of any other persons who could have been at the spot at the relevant time. But the Court on this point also observed that even if this is so, the accused cannot derive any benefit from the same as the testimony of the victim was found to be clear, cogent and reliable and as per settled principle of law defects if any left in the investigation by the police cannot by themselves be a ground to disbelieve the prosecution case unless and until the said defect is such that it causes prejudice to the accused.

Consequently, the Court held that there does not arise any question of granting the benefit of probation to the accused or showing unwarranted leniency to him further sentencing the accused to suffer Simple Imprisonment for one and half years and to pay a fine of Rs.500/- in default of which, he shall undergo further Simple Imprisonment for 3 months for the offences punishable under section 354 of the Indian Penal Code,1860 and under section 12 of Protection of Children from Sexual Offences Act, 2012 as the victim was aged only about 15 and ½ years on the day of the incident thus being “child” within the meaning of the term as given to it u/s.2(d) of the POCSO Act, 2012. However, the accused was acquitted of the offences punishable under sections 354-D, 504 and 506 Part-I of the Indian Penal Code, 1860 vide Section 235(1) of the Code of Criminal Procedure, 1973 on the ground of want of particular ingredients of the mentioned offences.

Notably, the Bombay Courts can be seen to have strong stands against instances of sexual harassment against women or more particularly where the question of the modesty of a woman was involved. For instance, in the case where a 45 years old happily married woman lodged a report with the Police Station, alleging that a man who happened to be the owner of a neighbouring grocery shop, approached her when she was washing utensils and tried to handover a chit and when she refused to accept the chit, he threw the same on her person and left muttering “I love you” and before the incident also the accused was flirting with her on many occasions and used to throw small pebbles on her person and was indulged in making obscene gestures, keeping all the technicalities apart, the Nagpur Bench observed that “the cumulative effect of the evidence on record, particularly, the version of the victim, would suggest that she is a married woman, aged 45 years and the very act of throwing a chit on her person which professes love for her and which contains poetic verses, albeit extremely, purely written is sufficient to outrage the modesty of a woman.”  It was further observed that “The modesty of a woman is her most precious jewel and there cannot be a straitjacket formula to ascertain whether modesty is outraged.” Subsequently, the accused was convicted for the offences punishable under Sections 354 and 509 of IPC, 1860.  Similarly, the bench at Aurangabad, dismissing a criminal revision appeal vide its judgement dated 21st December 2021 held that “touching any part of the body of a woman without her consent that too in the dead hour of the night by a stranger amounts to a violation of modesty of a woman.” In this case, the accused was sitting at the feet of the victim and had touched her feet and was sitting on her cot that too at such an odd hour of the night upon being ensured in the evening by the victim that her husband would not be present in the house in the night. Observing that when the act of the accused was capable of shocking the sense of decency of any woman and that the act of the accused indicated that he had gone there with sexual intent and violated the modesty of the victim the Court convicted him for the offence punishable under Section 354 and Section 451 of the I.P.C., 1860.