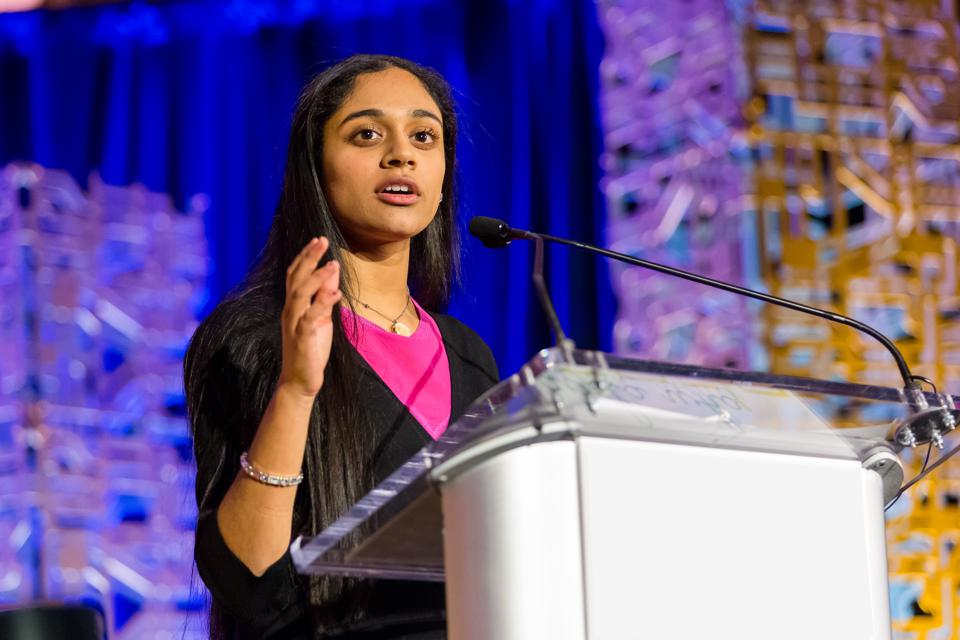 Just 1 month and 10 days before her 13th birthday, on September 9th 2013, Rebecca Ann Sedwick, a 12 year old American student at Crystal Lake Middle School, Florida committed suicide by jumping off a concrete silo tower. Investigation into her death led to a conclusion of in-person and cyber bullying contributing to the decision to take her own life.

While the whole world discussed and debated her suicide and the impact of cyberbullying on adolescents, one young girl, Trisha Prabhu, decided not to remain a bystander and set out to fix the problem at its very roots. At 13, she didn’t have the resources or expertise on the subject to bring about change, but her passion kickstarted and ignited her journey towards that goal.

After returning from school one afternoon, Trisha Prabhu read about this horrifying incident and was deeply moved, shocked, and outraged. Heartbroken, Trisha wondered how a girl younger than herself, could be pushed to take her own life. She felt like something was going terribly wrong on the internet and wondered over and over, how the internet could allow such things to happen in the first place. The deep sense of pain she feels for Rebecca, can be felt in her voice as she begins her speech at a TedX event, where she cites the mean, hurtful and tormenting messages hurled by the cyber bullies at Rebecca Ann Sedwick, causing her to commit suicide – “Go Kill yourself”. “Why are you still alive?”. “You are so Ugly”.

Trisha began to wonder if adults even understood the gravity of the situation and if they were even willing to take charge and bring about the necessary change required to end this hate online. At that very moment Trisha decided that she wanted to do something to stop cyberbullying at the source before the damage is done. This led her to research on the subject which led to some startling revelations. Trisha realized that Rebecca was just one of a countless many who had endured the same pain and trauma. Megan Meier was a young teenager from Missouri who had her whole life ahead of her. Excited to join social media, she made a MySpace account, where she started receiving messages from a boy named “Josh”. Megan started receiving messages like, “The world would be a better place without you.” 3 weeks before her 14th birthday, Megan committed suicide.

Deeply moved by these stories she read about this silent pandemic of cyberbullying and being passionate to end online hate, Trisha created the patented technology product ReThink™, that detects and stops online hate at the source. What started as a school project eventually grew into a globally-acclaimed research. Thus, ReThink saw the day of light with Trisha as it’s CEO and Co-Founder.

Today, ReThink is an award-winning, innovative, non-intrusive, patented technology that effectively detects and stops online hate before the damage is done. More than just a technology, ReThink is a student-led movement too – It is a call-to-action, a push to end online hate and raise responsible citizens. The Artificial Intelligence powered ReThink is transforming lives and conquering cyberbullying. Latest data reveals that with ReThink, adolescents change their mind 93% of the time and decide not to post an offensive message.

At the time of publishing this article, ReThink has reached 1500+ schools, 500K+ downloads, 5 million+ students have been impacted, and 1.1 Million Ted Talk advocacy. It is available on your smartphone or tablet. It currently supports English, Spanish and Hindi. There is provision now to start a ReThink Chapter at your school as well.

How does ReThink work?

ReThink, an iPhone and Android app, installs a digital keyboard that replaces the standard smart phone keyboard. It appears identical and integrates seamlessly with other apps, like email clients and social media platforms. The only difference—it uses artificial intelligence to identify offensive words, and then deploys pop-up alerts to give the user a chance to reconsider sending those words in an email, text, or social media post. If you use the ReThink keyboard to insert phrases like, ‘I hate you’ or anything that goes in the territory of obscene or ignorant of someone’s feelings, the app prompts: “Hold on! Are you sure you want to say that?” or “Remember, you are what you type!” and gives you the option to either go ahead with the text or clear it.

While Trisha faced several obstacles while developing and launching the app, she faced greater challenges as a young woman of color (Indian immigrant) trying to run a tech company at such a young age. In an interview to the Vogue she says, “Everyone thought that I was really cute, but no one thought that I was serious, that I was committed to this idea and was going to be relentless about making it happen. I faced a lot of naysayers There were also several situations where I was on the phone with some very important people and they were really interested. But when I walked into the room, they were like, hold on, you’re a 16-year-old girl with no prior experience of the tech space. I had a lot of people who counted me out without really giving me a chance. Maybe that’s something a lot of women in the tech space experience, just being counted out without a chance to make their pitch. I had to work twice as hard and ensure my pitch was perfect so that there was never a reason to doubt anything that I was saying. It felt like there were times when there was a double standard. But in some ways, it was worth it because making change is more fun when you have something to prove. All the impact that we have been able to create today is a testament to the fact that I may have been cute, but I was also very serious.”

Thanks to her entrepreneurial spirit, Trisha has received world-wide acclaim in the business world. In 2016, President Obama and the U.S. State Department invited Trisha to the Global Entrepreneurship Summit, to showcase her work and share her story with other entrepreneurs. This led to ReThink being featured on ABC’s popular Television show, Shark Tank. In 2019, ReThink was the winner of Harvard University’s President’s Global Innovation Challenge & Harvard College’s i3 entrepreneurial Challenge. Trisha is the first ever Harvard College freshman to win the Harvard University’s President Innovation Grand Prize.

Trisha has also been honored with awards and recognition for her ingenuity in inventing, building, and launching ReThink. For her research and scientific inquiry, Trisha was named a 2014 Google Science Fair Global Finalist. She was awarded the 2016 MIT (Massachusetts Institute of Technology) INSPIRE Aristotle Award, as well as the 2016 University of Illinois at Urbana-Champaign Illinois High School Innovator Award.

Trisha’s advocacy to put an end to hate, social activisim and commitment to find an ever lasting solution to cyber bullying, led her to be selected as the 2015 Global Teen Leader by “We are Family Foundation”. In 2016, she was conferred with the WebMD Health Hero of the Year Prodigy Award. She has also been conferred with Anti-Bullying Champion Award by the International Princess Diana Awards, the Global Anti-Bullying Hero Award from Auburn University, the Upstander Legacy Celebration Award from the Tyler Clementi Foundation, and Daily Points of Light Honor, awarded by the George H. W. Bush Foundation for extraordinary social volunteering and service.

Trisha’s vision and voice against online hate and the power of “ReThink” has been spread across the globe through her 38+ keynotes in 24 cities at platforms such as TED, TEDx, Wired, La Ciudad de Las Ideas, SAP, Girls Who Code, the Family Online Safety Institute, universities, schools, and more.

In 2017, she was elected Illinois’s Youth Governor – the first female YMCA Youth and Government youth governor in 28 years. During her free time she volunteers to teach young women how to code at ‘Girls who code’, or leading SoGal Boston, a chapter of the SoGal movement. Being an ardent supporter of empowering women in the entrepreneurial community, Trisha has been relentlessly working to inspire next generation entrepreneurs to fearlessly work in tackling pertinent issues plaguing the world.

Trisha is currently pursuing her undergraduate education at Harvard University in Cambridge, MA, USA. In one of her keynote speeches Trisha roars, “I am a Big dreamer and believe in making dreams come true.” We at ‘The Womb’ truly wish her the best and hope that her dream to build a better world by combating hate through technology come true.

The Sari – A Priceless Treasure in Every Women’s Wardrobe

Ok Then. Remember To Shriek Wildly After Sexual Assault