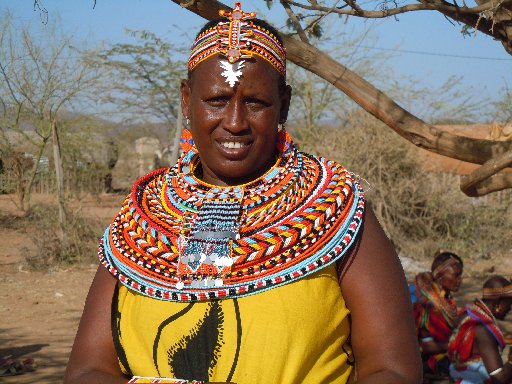 The Samburu are a Nilotic people of north-central Kenya. Samburu are semi-nomadic pastoralists who herd mainly cattle but also keep sheep, goats and camels. Rooted deeply in patriarchy, the Samburu people are semi-nomadic, largely polygamist and closely related to the Maasai tribe. Women in the tribe have been living under a harsh patriarchal system for as long as they can remember. For generations, female genital mutilation is one of the most important rituals among the Samburu tribe. Once circumcised the girl can be given away in arranged marriage to a man who is old enough to be her grandfather. The Samburu tribe has a tradition of repressing women and treating women as second class citizens. Women are not allowed to own land or other types of property, such as livestock and are considered property of their husbands.

In accordance to their culture, the father chooses an older “warrior” male with which the daughter will enter into a temporary marriage. Pregnancy is forbidden, but contraceptives are unavailable. If the child becomes pregnant, she is forced into an abortion, conducted by other women in the village. Since the girl is married at an early age, she cannot be a competent parent. While giving birth they face a lot of challenges: they rupture, they bleed, because they are young and don’t have access to healthcare facilities.

Even performing their duties and chores, is very hard for them. They are often left to take care of animals.

Some of the harrowing experiences endured by the women in the tribe include the story of a 11 year old girl who was traded for cows by her father. Her husband was 57 years old. Another young lady has five children, all with different fathers. Girls are married off to men, the age of their grandfathers. Women have little or no say in matters pertaining to the Samburu community. At village meetings men sit in an inner circle to discuss important village issues, while the women sit on the outside, only occasionally allowed to express an opinion.

If the repression and harrassment meted out to women in the Sambaru community by local men were not enough, during the 1980’s there was an “epidemic of rape” on Sambaru women by British troops on exercise in central Kenya. Since, 500-600 women from the Samburu tribe in Kenya have fought for decades to prove that they were raped by British soldiers who, under an arrangement with the Kenyan government, train regularly in the nearby countryside. Those impregnated by their rapists and who gave birth to children that are of a lighter colour than native children have been shunned, abandoned by husbands and families and forced to leave their villages. On August 14th 2003, a hundred Masai women trekked to the British High Commission in Nairobi, to lodge a complaint that they had been raped by British soldiers. Another 800 women, mostly from the Masai tribe or their Samburu cousins, have made similar claims. The matter is being investigated by Britain’s Ministry of Defence at snail’s pace. More incidents of sexual assault are coming to light with the most recent being 30 women from the Samburu tribe alleging that they were raped by Gurkhas based at Archers Post in 1997.

Distraught at being subjugated to domestic violence, child marriage, female genital mutilation and rape from men, both within and outside the community, a group of 15 brave women under the able leadership of Rebecca Lolosoli, took matters into their own hands and setout to start their own village, devoid of men. Thus, in 1990, was born Umoja Uaso (“unity” in Swahili, the Uaso Nyiro is a nearby river), an all female matriarch village located near the town of Archers Post in Samburu County, 380 km (240 mi) from the capital, Nairobi. Umoja Uaso is one of the world’s first “All-Women” communities where men are not allowed to reside nor are they allowed to dictate their views or opinions on matters pertaining to the community.

What started as a sanctuary for 15 women, who survived sexual assault and rape by British soldiers, has today grown to give shelter, livelihood and a future to any and all women trying to escape harrassment, repression and rape.

Rebecca Lolosoli, who started this movement recollects, “As a woman you have no right. If the husband wants to kill you, he has the right to kill you anytime because women are like a property. Men wanted to destroy our village but we resisted. We are not going to move an inch even if it means they kills us. Let them kill us all and make history of killing all the women in the village.”

Rebecca is the matriarch of Umoja women’s village and an advocate for women’s rights. Growing up as a member of the Samburu tribe she was married off at the age of 18. Deeply moved by the suffering of women all around her, she began speaking up about helping women who were victims of rape by British soldiers. Angered by her vocalism, the men in her neighborhood beat her up till she was hospitalized. To make things worse, her husband did not protest when she was being beaten and hence she left him. Along with her other victims of violence, she established the women-only village of Umoja Uaso. Umoja which was once a safe heaven for women has now become a globally known example of a successful matriarchy.

Even to this day, the men in the Samburu tribe consider Rebecca as a threat because they firmly believe that she is ruining the age old culture and tradition. She has faced repeated threats and attacks from local men since she set up the “women-only” village, but she remains undeterred.

What began as a refuge for survivors of sexual violence and torture, Umoja has grown to provide a safe habitat and nutures 47 women and 200 children. One would imagine that these communities would only have older women, but there are plenty of young women as well, who left their homes because they did not wish to be subjugated to torture from their husbands.

Although the inhabitants live extremely frugally, these enterprising women earn a regular income that provides food, clothing and shelter for all. Village leaders run a campsite, a kilometre away by the river, where groups of safari tourists stay. Many of these tourists, and others passing through nearby nature reserves, also visit Umoja. The women charge a modest entrance fee and hope that, once in the village, the visitors will buy jewellery made by the women in the craft centre.

Intimidated by their self-sustenance model, the insecure men from neighboring villages began beating the women and snatching away their hard earned money. The men felt threatened with the gaining independence of women. Since, Umoja has now been barricaded by thorns and women stand guard all night to protect their community. Over the years, women have grown in strength and are enjoying their freedom. There are no bells and whistles to their lifestyle but the women and children earn a regular income to take care of their basic needs.

The women of the village have been taught how to construct their own houses where they can live peacefully. With the hand crafted jewellery that they make and sell by the roadside, they have attained financial independence. With their savings, they have now started a school for the children in the village because they now understand the importance of education. Rebecca firmls believes that the children should not be handicapped because of lack of knowledge and that they should see light in their life by having good education and have an understanding of what’s going on in this world. As if setting an example, Rebecca’s daughter now studies in Germany. The self-sufficiency and freedom has inculcated a ray of hope among the distraught women which has inspired them to give a better future for their children.

On occasions, men are allowed to meet the women of the community. However, who comes in and who goes out is dictated by Rebecca. The rules of the village are crafted solely by the women. The young girls are allowed to meet their boyfriends but outside the village. When they get pregnant, their children can live in the village but the male must leave the village once they are eighteen years of age. All decisions are collectively made by the women of the community under the “tree of speech”, a place where they gather for discussions on issues plaguing their community.

The internet has put Umoja firmly on the global map and now people travel far and wide to come and see how the land of “no-men” thrives in the region of Samburu. Rebecca has been able to interact with powerful women across the globe and is now friends with the former First Lady of the United States, Hillary Clinton. Thanks to Rebecca’s every growing international clout, the elaborate beaded jewellery produced by the women of Umoja has found a worldwide marketplace. Also, Umoja Uaso has turned into a tourist destination visited by people across the globe.

Inspired by the success of Umoja Uaso, several all-feamle societies have cropped up across Kenya. While some villages forbid men completely, others allow men to be part of the community but it is the women who have an overriding say in all matters pertaining to their community.

Gender inequality is the blemish of the 21st century, a remnant of the past that the tide of time should have long washed away. It’s easier for girls in urban places to fight for equal rights but for a tribal women like Rebecca Lolosoli to raise her voice in a patriarchal society and highlight that misogyny is not normal, is indeed a rare achievement and ofcourse commendable.

Female Entrepreneurs in the Legal-Tech Space