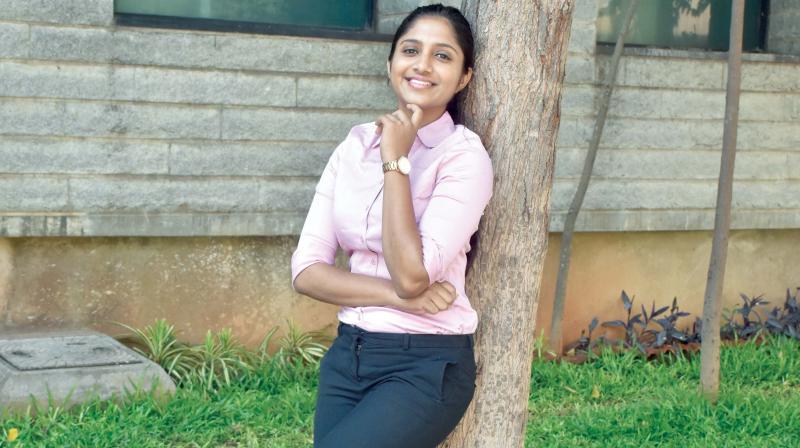 “I only feel angry when I see waste. When I see people throwing away things we could use” – Mother Teresa

Bengaluru, touted as the Silicon Valley of the East and the Technological Hub of India, has in recent years earned the ignominious title of ‘garbage city’ due to abysmal planning and a broken waste management system. At present, Bengaluru generates about 2,800 tonnes of mixed waste on a daily basis. This is currently dumped in landfills, which are unhygienic, unsustainable and are under scrutiny from the Karnataka High Court and the National Green Tribunal (NGT).

People are seen scrunching their noses, complaining about the unbearable stench and grumbling about how their area has become a breeding ground for mosquitoes, but very few have taken any concrete steps to find a viable solution to the problem. However, Ms. Nivedha RM has set out on a journey to put an end to this menace.

Nivedha was in her third year of chemical engineering at Bengaluru’s R V College of Engineering when she and a group of friends cleared a lane near their college, where garbage had piled up over time and remained uncleared. This initiative made headlines in a local magazine which gave her the much needed recognition to pursue a larger goal of cleaning up Bangalore.

In her vicinity, Nivedha saw that all kinds of waste – stale food, diapers, blood, used syringes, plastic were strewn around on the streets. She was always frustrated to see the litter on the streets close to her house which would often stink and would get obnoxious when the garbage was burnt once a week by the authorities. She and her friends decided that they had to put an end to this menace and started cleaning the garbage themselves. But, unfortunately after a few days of cleaning, the garbage was back on the streets. Nivedha felt she had failed because she had only temporarily solved the problem but had failed to identify the root cause of the problem.

Determined to pursue her goal, Nivedha and her team decided to do a door-to-door campaign in an attempt to help educate people about the need to segregate waste at the source. But convincing people to change their age-old habits was a daunting task. She then began to research online to find ways in which this problem could be resolved, only to end up being frustrated because she could not find any feasible solution. Nivedha almost gave up.

One day, a 3 year old girl who was playing by the roadside, slipped and fell into a burning pile of garbage and lost her life. Nivedha was deeply anguished to hear the wails and cries of the young girl, but little could she do to help save her life. This incident left a deep impact in the mind of Nivedha and her resolve to pursue her goal of finding a solution to this menace was cemented.

Nivedha furthered her research on the internet to find any product which could segregate waste but was disappointed not to find any solution across the globe. Hell-bent on trying to fix the problem, Nivedha decided to build her own system which could get the job done. She decided to meet industry veterans and share her idea hoping somebody would help her pursue her goal. However, she was dismayed to learn that several people had attempted this feat before and had failed miserably. The only advice she got from these veterans in the industry is to not waste her time trying to fix this problem and to go find a rewarding career. Nivedha who came from a humble middle-class family was distraught by the responses she got. But the wails and cries of the 3 year old continued to haunt her and she set out to build her own machine.

Within 5 months, Nivedha built a working model of a system from scratch and was partially successful in segregating waste. Enthused by the results, she decided to demonstrate her product to all her critics who had advised her against treading on this path. Unfortunately, on the day of the demonstration, the system failed within five seconds of being switched on, as the motor jumped out of the machine and she was totally distraught. The mocking of people left her devastated and she was convinced that all her critics were indeed right in advising her not to pursue this endeavor. She decided that this was the end of the road and she must now focus on pursuing a job.

One call with her mother however changed everything. Her mother reminded her of the loss of the precious life of the 3 year old in the burning waste and the need to bring about change, else the menace could engulf the entire society one day in the near future. Her mother also reinforced Nivedha the need to put in dedicated and sincere efforts until all the possibilities were exhausted and not to bother about the end outcome. She also assured Nivedha that she would support her daughter fulfill her dreams with whatever meager income that she had.

This call with her angel mother gave her the much needed oxygen to pursue her goal. Nivedha spent the next few months visiting garbage dump sites across the city to study the different types of wastes and the potential ways to deal with this abundance of litter. Thanks to her continued efforts, she embarked on a journey which was nothing less than an adventure where she chanced upon some of the most interesting people, who eventually quit their lucrative jobs to join her in her efforts to clean the city. Now equipped with manpower and intelligence from diverse spectrum of society, her team methodically and meticulously built a system which could segregate waste, a system which was deemed impossible to build by the so-called experts. Nivedha had made her “Impossible Dream” come true. Thus was born ‘Trashcon Labs Private Limited.’

Trashcon Labs, with its technology enabled solutions, is helping the world dispose off waste in a responsible manner by turning every bit of waste into something of value that is not perceived as waste. Their flagship product, Trashbot starts at Rs. 9 lakh and the price varies on capacities. Societies can process their waste and connect it to a biogas plant or composting unit. The gas can be used for cooking purposes, while compost in the gardens. Plus, they can sell the non-biodegradable waste to Trashcon and generate revenue too.

Some of their esteemed clientele include Adani Port in Mundra, Gujarat and Airports Authority of India, Chennai.

In recognition of her work in providing unconventional solutions to some of the world’s toughest problems, the Norwegian Minister of Trade and Industry, Torbjørn Røe declared Nivedha the winner of the 2019 Impact Maker Awards which carried a prize money of Rs. 40 lakhs. The Impact Maker Awards has been instituted by the Norway-based group Xynteo, and consists of major companies like Unilever, Mastercard, General Electric and Tatas. Xynteo has also extended support to Nivedha to help her scale up the production which currently stands at ten machines a month.

In an interview to BetterIndia, Nivedha says, “When I started working at the dumpsite, my friends were getting an MBA. They would joke and mock me as a ‘kachrewali’ (waste-picker). But now, when I look back, the recognition and the blessings of people we impacted, outweigh any doubts. With every tonne of waste I saved from entering landfills, I impacted 4,000 lives (1 kg per household of four). We now want to reach every village and city and prove that waste is wealth.”

Even though Nivedha could not save the 3 year old girl from losing her life in the burning pile of waste, she has now ensured that more young children do not fall victim to the garbage menace plaguing cities across the globe.

Menstrual Hygiene Day: What You need to know