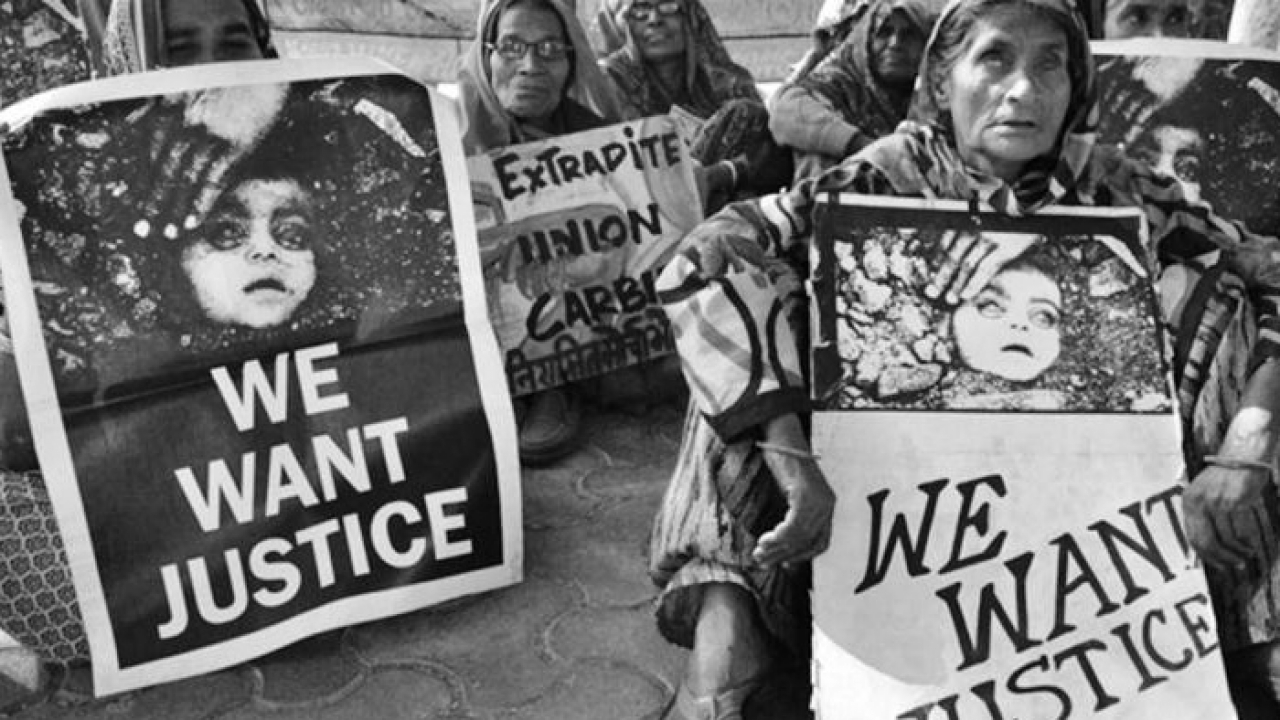 Last year, survivors of the Bhopal gas tragedy commemorated the 37th anniversary of the incident. Thereafter, they decided to launch a campaign, “Bhopal Disaster: 37 years; 37 questions”, through this campaign, they decided to ask one question for the next 37 days.

A delegation of five members met with the Union Minister of Health and Fertilizers, Mansukh Mandaviya, and submitted their memorandum on June 19, 2022; they have urged to take action on their five demands of which they seek relief, compensation, and correction in the figures of the numbers of people both injured and dead in the curative petition submitted before the Supreme Court of India.

On the 25th day of the campaign, they asked, “Why is the Madhya Pradesh government sitting for ten years on Rs. 40 crores, meant to provide social support to ease the suffering of Bhopal survivors?”. In 2010, the Group of Ministers had approved the transfer of Rs. 85.20 crores from the Central government to the Department of Bhopal Gas Tragedy Relief and Rehabilitation (DBGTRR), Government of Madhya Pradesh. The decision on constructing houses in areas affected by groundwater contamination continues to be on paper.

In a telephonic conversation, Shezadi Bee, member, Bhopal Gas PeeditMahilaPurush Sangharsh Morcha, said that the state government acknowledged the death of 15,000 people because of the tragedy, but they submitted before the Supreme Court of India that 5295 people died. The Chief Minister, Shivraj Singh Chauhan, has not met survivors despite working in the capital for the last ten years, never uttered a single word about survivors of the tragedy. How can we expect something from them; we are still struggling for our justice for the last 37 years.

She expressed that the survivors of the tragedy are not claiming compensation from the Central or the state government; they want the compensation to be taken from the company. Small kids who had suffered because of the gas leak in 1984 have grown, but they are not in a condition to provide income to maintain their families. The Gas Relief Minister of Madhya Pradesh, Vishwas Sarang’s family were amongst survivors, and they received compensation for the tragedy. However, he did not transfer the agenda which was submitted by us before the Supreme Court as it was promised to survivors. Later, she spoke about the lack of medicine and treatment in ICMR, many survivors have died because of it, and many survivors are suffering from Blood pressure, heart disease, cancer, and issues concerning kidney. Neither of the political parties who have been in power has neglected victims. She shared an incident of then Gas relief Minister in the Congress Government, ArifAqueel, who had promised to render recompense to survivors. Then on being called, he had told her to gather 500 people; Neelam Park was the venue decided, but the politician did not arrive, and on being asked about his false promise, he said that no help be provided to survivors.

Women Suffered Immensely From this Tragedy:

The methyl isocyanate has affected women immensely as they may not conceive a child as toxic gases on foetuses has exposed to gas in-utero. The Convention on the Elimination of All Forms of Discrimination against Women came into force on September 3, 1981, under the resolution 34/180 in the United Nations General Assembly passed at the same juncture. The conventions mention the instruments which are available to provide support to women and maintain their dignity. However, extensive discrimination remains against them as they cannot gain food, health, education, training and other opportunities. This pitiable deed will cause an indiscernible consequence on the welfare of the family, and the development of society, will not take place. The report published by the Down to Earth wrote about the social rehabilitation scheme, Bhopal Gas Tragedy Relief and Rehabilitation, where Rupees One thousand (i.e. Rs. 1,000) was promised to be given to the widow of the Bhopal gas tragedy incident. However, there were around 5,000 widows who did not receive their pension for the last 18 months, and they could not protest because of the pandemic.

The government restricted this pension between 2016 and 2017 without providing reasons for their query. It was claimed by the Union Department of Social Justice that the reason over 2.5 million widows, abandoned women, and especially table weren’t able to receive their pensions during the three months of the first lockdown was that the finance ministry did not allocate the amount for beneficiaries. The centres which were built for yoga sessions to improve the health conditions of Bhopal tragedy victims are utilised to organise weddings. The inability of the government not to benefit the widow, and victims, especially able is against Article 47 of the Constitution, where the state need to give regard to raising the level of nutrition and improve public health and Article 38, where they shall strive to promote the welfare of the people by securing and protecting as effectively as it may a social order.

The Discrepancy in Death figures

On their 15th day of the campaign, allied groups to be given justice for their loss suffered during the 1984 gas tragedy entreated the state government concerning their submissions before the Supreme Court of India as two dissimilar death figures to the tragedy was provided. They had submitted in the Criminal curative petition (No. 39-42/2010) before the apex court, wherein the survey conducted by the Department of Gas Relief and Rehabilitation found 15,248 people died because of the gas leak. On the other hand, in the civil curative petition (No. 345-347/2010) for additional compensation from the Union Carbide and Dow chemical, the state government informed the apex court that 5295 people died because of the disaster.

Rashida Bee, President, the Bhopal Gas Peedit Mahila Stationery Karmchari Sangh (BGPMSKS), said they want to know why the state government is misleading the Supreme Court of India on the issue which concerns death caused by the exposure to the methyl isocyanate.

Their question becomes significant because the action plan prepared by the state government in 2008 for the rehabilitation of gas victims mentioned that over 16,000 people had died in the tragedy. Thus, many survivors will remain excluded from receiving compensation and benefits of schemes for rehabilitation from the disaster. The incident has affected their bodies to participate in any workforce to earn income for their livelihoods.

The never ending litigation in this tragedy:

The apex court in 1996 had revoked charges against a few accused, and those were under Section 304 (part II), 324, 326 and 429 of the Indian Penal Code 1860 (I.P.C). It was pointed out by the bench that the trial court should frame charges under Section 304A. Consequently, the proposed review petition (Criminal Misc. Petition Nos. 1713-16 of 1997) was dismissed on March 10, 1997. The decision of 1996 was questioned neither by C.B.I nor by the State Government of Madhya Pradesh. There were no review petitions filed under Article 137 of the Constitution of India; they proceeded for 14 years to prosecute the accused under Section 304A, 336, 337 read with Section 35 I.P.C.

There was a petition filed by the Central Bureau of Investigation (C.B.I) in 2010 to recall the judgement of the apex court in 1996. The petitioner stated that the court made an error in ignoring materials and cancelling the charge under Section 304 (part II). The Supreme court of India held that there was no satisfactory explanation given to file a curative petition after the judgement was delivered in 1996. Those who were convicted include former Union Carbide India Chairman Keshub Mahindra. The apex court dismissed the curative petition (Criminal case no. 39-42) in 2011.

On their 31st day of the campaign, the question was directed towards the investigative bureau; they asked, “Why has the CBI failed to make Dow Chemical appear in the ongoing criminal proceedings on the disaster in the Bhopal District Court despite six summons issued by the Court since 2014?

In 2001, Dow Company took over Union Carbide; they took control of their assets as well as the civil, criminal and environmental liabilities in Bhopal. In the last five years, the district court of Bhopal issued five summonses to Dow Company to produce absconder Union Carbide in the criminal trial. These notices were made under the Mutual Legal Assistance Treaty (MLAT), which permits the Home Ministry and CBI to ask the Department of Justice (USA) that notices served to Dow Chemicals.

The curative petition (civil case no. 345-347/2010) was registered on December 22, 2010. Petitioners to this matter are BGPSMKS through Rashida Bee, BGPMPSM through Nawab Khan and Others along with the Union of India against the Union Carbide Corporation, the DOW Chemicals and Others. It was filed concerning the judgement which was delivered by the Supreme Court of India on February 14, 1989, where Union Carbide was directed to compensate with the sum of INR 750 crore.  A Bhopal court had given an order on June 7, 2010, against seven executives of Union Carbide India for imprisonment up to two years in connection with the incident.

The release of 27 tonnes of methyl isocyanate and other gases in Bhopal on December 4, 1984, turned the place into a gas chamber. The company’s document mentioned that the design of the plant was planned with unproven and untested technology; the purpose was to save money on maintenance and safety. The Station House Officer (S.H.O) registered suo-moto under Section 304A I.P.C; it was registered as Criminal Case No. 1104 of 1984. Thereafter, the investigation of this tragedy was taken over by C.B.I on December 6, 1984. The court of C.J.M held the charge-sheet about the incident on December 1, 1987.

The Central Government in the Supreme Court of India in August 2011 said UCC which is owned by Dow should be directed to pay an additional sum of Rs 7413 crores as compensation.

The matter for compensation was last listed for January 29, 2020, heard by five judges consisting of Justices Arun Mishra (retd.), Indira Banerjee, Vineet Saran, M.R. Shah and S. Ravindra Bhat. The next date to hear a plea by the Central Government seeking additional funds from successor firms of the United States of America (U.S.A) based Union Carbide Corporation (U.C.C) was for February 11, 2020. The aim is to provide compensation to victims who suffered from the tragedy at Bhopal in 1984. The matter on compensation was led by then Justice Arun Mishra, and he had stated that the plea would be heard by a dissimilar grouping of judges. It was informed by the Supreme Court of India that the then Chief Justice of India, S.A. Bobde- will decide on establishing the composition of the bench which will hear the matter because Justice Ravindra Bhat offered to recuse himself from not hearing this matter as he had appeared as a lawyer for the Central Government in the settlement case in 1989. The Justice had expressed his unwillingness to hear the matter, he said, “I had appeared for the Union of India in the matter when union had sought review”. Therefore, a new bench of judges shall hear the Centre’s plea to try and find additional funds from the Union Carbide which is currently own by Dow Chemicals Co.

Last year, the Madhya Pradesh High Court delivered the order that the Madhya Pradesh Government will need to provide free treatment to the victims suffering from cancer because of the Bhopal Gas Tragedy in AIIMS Bhopal. The Bhopal Gas Peedith Mahila Udyog Sangthan and Others had filed this plea on which the judgment was delivered by then the Chief Justice Mohd. Rafiq, and Justice Vijay Kumar Shukla.

Meanwhile, the District Judge of Bhopal gave another day of hearing on March 25, 2022, to pick up the Union Carbide and its convicted officials to present their final arguments from April 25-29, 2022 in the criminal appeal. This appeal has been pending in court since 2010 against Union Carbide and its convicted officials. However, the matter on the compensation for victims of the Bhopal Gas Tragedy is yet to be decided by the apex court.