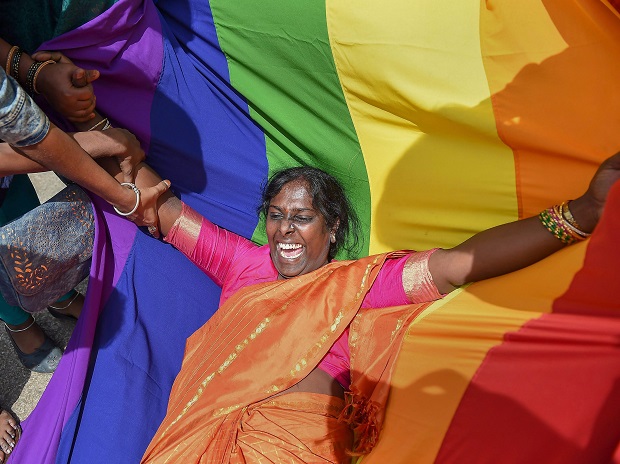 Nobody defies traditional norms of gender and sexuality like trans people do. They are a beautiful embodiment of fluidity, and trans stories are breathtaking. It is also perhaps why they’re at the receiving end of extreme ostracization and/or violence, not just by their biological families, but also by the State itself. The irony of welfare legislations and/or policies aimed for trans people is that somehow it makes their life worse. Trans and queer activists took to the streets to protest the absurdity of The Transgender Persons Act 2019, and that it violates their fundamental rights, but the State remained mum and went ahead with releasing Rules to implement the law. The Act now faces a constitutional challenge before the Supreme Court since June 2020.

The world celebrates Trans Awareness Week from 13th-19th November every year. As part of that (we’re slightly late), we jotted down 10 things about trans people in India that you should know about:

Hold on, this is not your normal – boy who wants to be a girl or girl who wants to be a boy or somebody who is a beautiful mixture of both or neither  – definition. The problem with this definition is that it is (once again) based on binary notions of gender. “Being trans is constantly feeling like you’re an innocent soul imprisoned in somebody else’s body”, says Jahnavi Sree, a transwoman from Telangana.  Trans is somebody who doesn’t identify with the gender they were assigned at birth.

Thousands of trans people gather in Koovagam, a quaint village in Tamil Nadu everyday year between April and May. Kovagam is an eighteen day festival that celebrates the transition of Krishna to Mohini to marry Aravan. In Mahabharata, the pandavas had to sacrifice one of their own – Aravan – to win the battle. Aravan’s last wish was to be married, so Lord Krishna transformed into Mohini to marry Aravan. Theres singing, dancing, sex-work, beauty contests – all part of tradition. The centre of the festival is a temple dedicated to Aaravan called ‘Koothandavar’.

Transwomen in fact depict the events of the Mahabharata during the festival – they shop for the wedding, get married, and watch as locals drag an Aravan statue for 2km and watch as it burns to ashes. The women then get their bangles, jewelry and sindoor snatched and wear white sarees to wail and mourn their husband. They return to wearing normal clothes post the festival. Hanshika Nayak says, “Getting married to Aravan is a divine power, we feel it every year but unfortunately it is only for one night…We know that we will never experience the love that a true newly-wed bride gets, but we will forever feel the pain of a bride who has lost her husband.” A Koothavam native noted “I still wonder about the way they cry. Are they crying over the death of their mythical husband or are they remembering years of humiliation and discrimination by the society or are the cries outcome of longing for true love.”

The Madras HC in 2019 said yes, in Arun Kuman & Anr v. Inspector General of Registration & Ors. The registrar of marriages in Tuticori refused to register marriage between Sreeja and Arun Kumar on the ground that it is not legally permitted. The Madras HC held that the word ‘bride’ in Section 5 of The Hindu Marriage Act included a transwoman, since they have a right to self-identify their gender as per the NALSA judgement. There is no official data on how many  trans couples get married and get it registered. Presently, the only recourse for trans couples is the judiciary.

As per the 2011 census data, there are 487,803 trans people in India, of which 56% are literate. It is important to take these numbers with a pinch of salt, the census apart being from old, is known to be ridden with flaws. Another study says there maybe over 50 to 60 lakh trans people, but many keep it a secret fearing discrimination. Of which, 60% are educated and 96% of them are denied formal employment. Perhaps, the more startling finding is that 99% of them have suffered social rejection more than once. Most engage in either begging or sex work as a result. Society, ironically, both drives and criminalizes trans lives to begging and prostitution.

There is no official data on poverty ratio amongst trans people, but as per a government report there is widespread agreement that many are trapped in poverty. Economic and social slumps like the COVID-19 have a disproportionate effect amongst the most vulnerable, and they are probably amongst the worst to get hit because they rely on daily wage work. Sunita’s income  dropped to zero from Rs.200 during the lockdown. Documentation is required to avail government benefits, but it is quite rare. The PDS system aims to give the poor food at subsidized prices, but it depends on the 2011 census to give out ration cards and 22 out of 29 states have exhausted their quota – many are left hungry as a result. Only 1229 trans people received ration. Many people survived when civil society groups stepped up.

Policies that depend on identity certificates fail when the majority don’t have them in the first place. Some states have announced food and cash relief without ration cards, but there is little data on how many were able to access them. 80%  said they didn’t have bank accounts to avail cash reliefs from the government. Aadhar or any other identity proof is important to get vaccinated, for instance, as a direct result less than 4% trans people are vaccinated as of May 2021. However some NGOs have conducted vaccination drives specifically for trans people and a vaccination center was opened for people without identity cards in Mumbai.

The District Magistrate issues identity certificates based on certain ‘documents’. The documents here refers to a document that confirms sex reassignment surgery, this is in direct contravention with the 2014 NALSA judgement which held that trans people have a right to self identify. More importantly, mandating surgery to allow someone to identify as trans is inherently transphobic and elitist – that somebody can’t be trans unless they got surgery, because that would exclude many. Surgery may be ideal for some, but it is incredibly expensive. Jahnavi Sree, a transwoman The Womb interviewed, told us that it can range from INR 4 lakh to 30 lakhs, depending on what one wants to get done.

Jahnavi Sree told us that she was refused rented houses on the sole basis of her identity. Many either leave their homes or are thrown out by their families. The Transgender Persons Act does in fact mandates that a trans person can only move out of their biological homes with a court order, failing to recognize the trauma they have to endure. They take shelter in communities (gharana system) managed by a guru – an older trans person, usually with better social clout. The relationship between a newly inducted trans person and guru is often called guru-chela. This system aims to make the transition easier, with counselling and training. If this is one part of the story, another that is many trans persons opine that the ghara system is exploitative. The chela is supposed to give a portion of their savings to the guru in exchange for food and shelter, but some gurus abuse their position. When Rose tried to run away from her guru for harassing her, the guru and some fellow chelas kidnapped and thrashed her for doing so. Some don’t allow their chelas to be introduced into the formal workplace, Rose said that “The elders hold us back from joining mainstream professions, partly out of selfishness and partly out of protectiveness.” Rose also said that the rules of the system are arbitrary – walking into a police station can also attract fines, for instance.

Abhina Aher, a trans activist from Delhi says “Our structures are a support system for us. Young kids who have run away from home because their families are unable to reconcile with their identity are in need of counselling and some love….Gender affirmation is important and counselling in our system is about transitioning to a hijra person, which is missing in a formal system. Hijra culture plays an important role. Self-worth is very crucial. If a child runs away from home, where does he go? We take them. I am not saying our structures are immune to the vices of exploitation but they are there in the absence of a family.”

Section 377, read down by the Supreme Court in 2018, was used as an excuse to detain trans persons and even subject them to physical and sexual torture. But it brought no change. Merely three days after the Supreme Court’s verdict a transwoman from Delhi and her friend were brutally beaten up for begging near a  metro station. Many have to endure brutality for particular reasons, Sanjit was once picked up and beaten up when he was returning home. One complained of police taking turns to insert lathis into their bodies, and another was hung upside down and raped. Nazariya, a trans & queer activist, says “The police in general and the Delhi Police in particular have been intentionally targeting sexual minorities and harassing us. Our members have been harassed on the street by the police and ‘eve-teased’ for their appearance multiple times. We do not feel safe at pride parades where we are surrounded by our abusers in the name of ‘protection’. The trans community especially has been facing immense hardships from the police personnels irrespective of 377. We need immediate laws that protect the community.”

These incidents above are incredibly common in India. A study by the National Institute of Epidemiology conducted amongst 60,000 trans perople from 17 states found that the greatest perpetrators of trans violence are the police and law enforcement agencies. Although there are some Supreme Court guidelines on police brutality and custodial torture, they have never seen the light of day. India needs a law that penalises such gross abuse of power.

Litigation in India is time-consuming, but it is at times the only progressive and safe space. But the arbitrariness of judicial administration adds additional roadblocks. The roster at the Supreme Court is not transparent – an ordinary person can never know and control when their case gets listed. For instance, the case that challenged the constitutionality of the Transgender Persons Act was last listed in 2020 and there hasn’t been an update since. Despite relentless protest from the community ever since its inception, the Act wasn’t stayed for at least during the proceedings. In another instance, a transwoman appeared for a government exam which had a separate cut-off of trans people. But it was never announced, forcing her to file a case and waiting for it to get listed for more than a year. There is little recourse in such cases.

Trans people have to endure a disproportionate effect of any and all misfortune of life and society owing to their social position. Amidst such chaos, it is refreshing to see many break glass ceilings and make the world a better place. Matha B Manjamma Jogathi was the first to win a Padmashri award. Grace Banu is a Dalit transwoman and software engineer in Tamil Nadu, the first to be admitted in a college. DVS Priya is Kerala’s first trans doctor. Apsara Reddy is the secretary of Mahila Congress. Jahnavi Sree, the woman we interviewed, scored a job at Mindtree after fighting many battles with herself. Laws meant for them violate their rights more than protecting them. To make spaces safe and inclusive, we need to be better listeners.