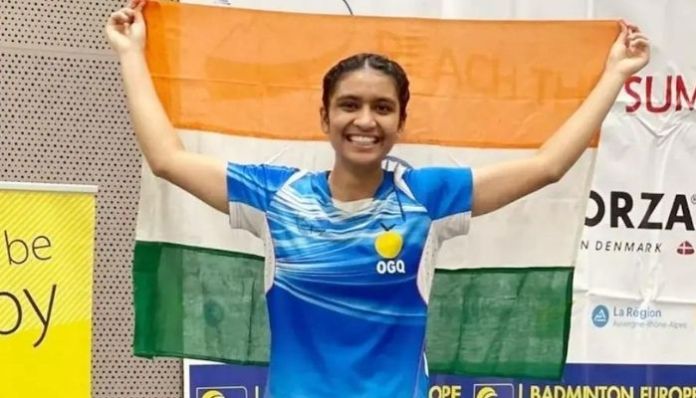 16-year-old Tasnim Mir, who hails from Gujarat, became the first Indian to top the under-19 world rankings in girls’ singles category, according to the latest Badminton World Federation junior rankings. The young shuttler won three junior international tournaments – in Bulgaria, France, and Belgium – in 2021 and jumped three places to reach the top position in the junior world rankings with 10,810 points.

With this feat, Tasnim has achieved something that even her role models PV Sindhu and Saina Nehwal did not attain. While Sindhu was a World No. 2 in the juniors during her U-19 days, Saina did not make the cut for being a junior as the BWF rankings started only in 2011.

The news of becoming the world champion came as a surprise to Tasnim. She said in an interview that she was not expecting to ever be declared world no. 1 because she still ranked no. 2 when the rankings were closed last year. However, the BWF opened the rankings again after the tournaments she played at the end of last year and added points that she earned from the tournaments, pushing her from world no. 2 to world no. 1. “…I am really excited and happy that finally I could become the world no 1. It is a great moment for me,” she said.

“It is a big confidence boost for me. Just like I became world number one in U-19, I want to continue that performance in seniors too,” Tasnim said in a virtual press conference organised by Sport Authority of India (SAI) on Sunday. “My long term goal is to improve my ranking in seniors as well, so that I can participate in Olympics and represent India.”

Tasnim first started playing badminton at the age of six, and was trained by her father, Irfan, who is a badminton coach and also an ASI in Mehsana Police, Gujarat. As a seven-year-old, Tasnim used to accompany her father to the stadium just to watch the sport of badminton. While she initially started playing badminton just for fun, Tasnim started training with her father because she was good at it and later played professionally after participating and winning state tournaments. Her father, Irfan, says that Tasnim has won a total of 22 titles in different categories thus far. “Now we hope that she becomes a senior champion as well and win for the country at the Olympics,” Irfan told India Today.

Tasnim has been training under Indonesian coach Edwin Iriawan at the Assam Badminton Academy in Guwahati for the last four years. Tasnim says that Edwin, who has also trained Saina and Sindhu, has helped her evolve as a player and improved her strength. Tasnim’s younger brother, Mohd Ali Mir, a Gujarat state junior champion, has also been training with her in Guwahati.

Tasnim now wants to focus on improving her senior rankings and is ready to face the challenges and failures that would come in the process. While she once used to get disheartened by losses, the teenager has now realized that the failures in the senior circuit will only help her get better at the game. “I don’t like losing. In last 2-3 years I have been winning and I am performing well but as I step into seniors circuit, I am facing losses. So I feel it is very difficult. So I used to think about giving up earlier but then I feel from these failures I will improve more,” she told PTI. Tasnim is looking forward to playing at Iran and Uganda next month and hopes to get into the top 200 by the end of the year.