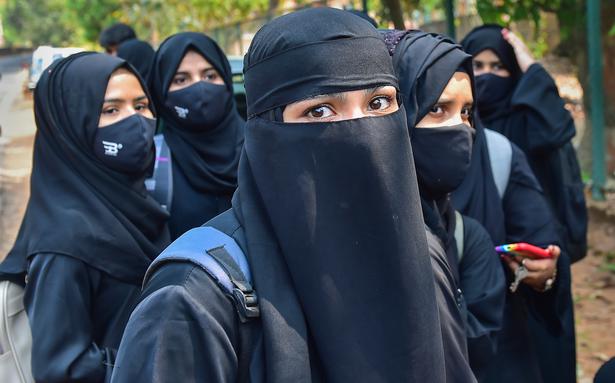 Education and religion have to co-exist and have always been interpreted so through the doctrine of harmonious construction.

The Constitution of India, in spirit, shuns extremism of any sort. It provides that right to education, right to equality and right to religion co-exist together and no one of them has a paramount importance in exclusion of others.

In this light, the interim order of the Karnataka High Court, which tends to equate saffron shawls with hijab, seems not only constitutionally incorrect, but frames the current issue in a way that is misleading.

The Constitution, in providing for the right to freedom of religion, does not expect citizens to shun emotions. It states that while it is in the individual domain for every citizen to practice one’s religion, the same should yield to public order, health and morality.

Through a catena of judgments, we also know that the Supreme Court, as long back as in the landmark case of the Commissioner, Hindu Religious Endowments, Madras v. Sri Lakshmindra Thirtha Swamiar of Sr Shirur Mutt, has laid down the test of ‘Essential Religious Practice’, which affords constitutional protection to the core principles of every religion, without interference from the State. This test provides that not everything done in the name of a religion or cultural practices associated with that religion are protected all the time, but those which are essential to that religion alone need to be protected. Of course,by the admission of the judges of the Supreme Court themselves, this is no easy task, as one can imagine the complications in deciphering what these ‘Essential Religious Practices’ mean. It requires judges to pore over religious texts and decide as if they are experts on these religious matters.

This question of how the Essential Religious Practices test will be applied in the setting of educational institutions, and particularly on hijab, has to be seen in the light of three judgments of Kerala High Court – Nadha Raheem v. CBSE (2015), Amnah Bint Basheer v. CBSE (2016) and Fathima Thasneem v. State Of Kerala (2018), where the question broadly revolved around the students’ right to dress and the practice of wearing hijab. While in Nadha Raheem, the Court upheld the right of Muslim girls to wear hijab, it also made it clear that the administration can examine the faces and identities of the students. In Amnah, the Court specifically held that the right to wear hijab is an Essential Religious Practice, but in Fathima, the Court held that in a private institution, the students cannot insist on specific dress code.

But for now, non-essential religious practices such as wearing saffron shawls cannot be equated to wearing of hijab for those practicing Islam, as the latter has indeed been held to be essential to the Islamic faith. While the Supreme Court can definitely look into the question of whether hijab is indeed an essential practice or not, even prima facie, it will be hard for anyone to argue that saffron shawls are essential to Hinduism.

This is where the High Court of Karnataka seemingly falls in the trap of the narrative set by those who want to ask : “if hijab is allowed, so should saffron shawls, in schools, as part of uniform.” Not only is this too simplistic a stand, it is in clear violation of appreciating the difference between the importance of saffron shawls in Hinduism, and hijab in Islam. Courts do not make the religions, they merely interpret them, and therefore, as per the Essential Religious Practice test, they have to see whether a girl practicing Islam can be asked to drop her religion outside the school walls and pick it up again when she is out of school. The Constitution makers never meant to put those practicing their religion through such a dilemma. Therefore, this framing of the current row as “Isn’t education paramount?” is too reductionist an approach, fails the constitutional test and seems to suggest that the right to education and religion are ‘either-or’. Education and religion have to co-exist and have always been interpreted so through the doctrine of harmonious construction.

However, it is no one’s case that girls wearing hijab should not be checked by invigilators, if there are concerns around the identity of a particular student during exam time. The exception created for public order and security remains paramount. Simply put, on grounds of security, girl students should be allowed to wear hijab but in a way that doesn’t completely cover their faces. If girls wearing burqa go to school/college to write exams, female teachers should be permitted to check their faces and IDs. Neither should parents claim that girls’ faces cannot be checked by lady teachers, nor should the school administration take an extreme stand of denying the opportunity to these students to write the exam if they wear a burqa, as happened in a Hyderabad school in 2017. This is the middle path on which all democracies rest.

Also, while some are asking whether it is time that liberal progressive women shun hijab, purdah or ghoongat, it is important to understand the constitutional perspective on this too. Ghoongat cannot be said to be an Essential Religious Practice to Hinduism, whereas hijab is as per Islam. While as a woman, I may disagree with both practices equally, the Constitution of India doesn’t leave it to me or anyone or the State to impose its will or judgment on the ‘right thing to do’ on others. It is up to each woman to decide for herself. While one can definitely share one’s view and even advocate strongly for no ghoongat and no hijab, the State cannot forcefully deny the latter, the same having been afforded constitutional protection.

This debate in India is not unique and finds clear precedents in similar debates in Europe and America. The American Constitution affords protection to Muslim women wearing Hijab as per its Fourteenth Amendment and also through the special Religious Freedom Restoration Act (RFRA) to ensure that they are not discriminated against. Perhaps it is time for India to introduce a similar law.

While the current hijab row may look like a one-off or isolated incident, several such incidents have been brewing, not just in Karnataka, but also in other southern states. A Tamil Nadu government Christian school triggered a row by denying Hindu girls permission to wear bindi, bangles or flowers in their hair when coming to school. This fed the narrative spread by BJP that “why should only Hindus be secular, when the Muslims and Christians can continue to be traditional?” This was followed by another incident where some students in a school would miss the sessions after lunch on Fridays, because they had to offer namaz. The headmistress of the school, a progressive woman, perhaps thought that if the Hindu students can offer Saraswati Vandana in classroom, then Muslims can offer namaz there too. So with the intent to save the time of the students, the Principal offered a classroom to the students. Now, while this was fine with the students, an investigation was carried out and the Principal came to be suspended. While as per Article 27 of our Constitution, there cannot be any religious instructions given in a government school, the question is whether giving them space for doing so, is also violative of Article 27.

The larger question that’s brewing in Karnataka is this : why shouldn’t there be a uniform in all schools, to promote uniformity amongst students? Why should there be selective allowance in this regard? The argument on behalf of those advocating uniformity is that no religious symbolism should be permitted on school campuses, whatsoever. Now, while it is no one’s case to argue against uniforms in schools in general, isn’t it taking an extreme stand to suggest a Muslim girl wearing a headscarf or a Sikh boy wearing a turban will be disruptive of the ‘discipline’ that the uniform prescribes?

The answer lies in the ‘middle path’ advocated by the Constitution of India. All controversies will have to eventually find their end in this manner, if those upholding the Constitution stay true to it.

First published on Bar and Bench