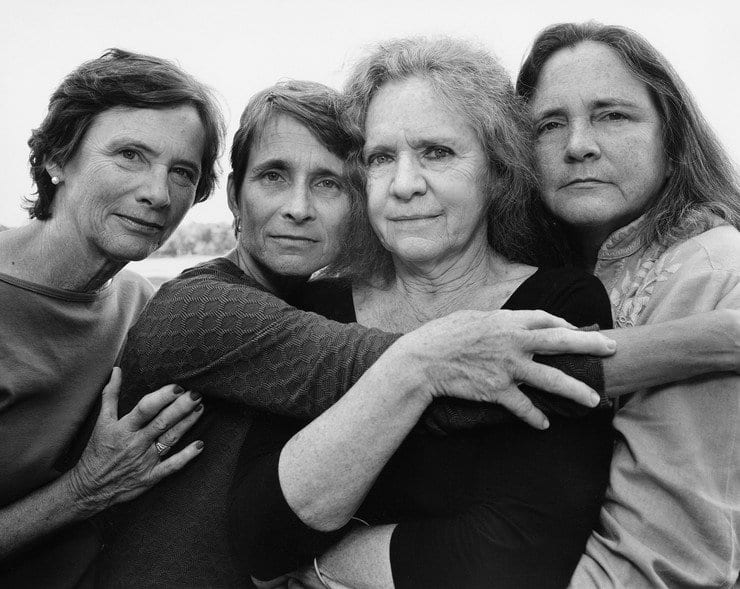 “Having a sister is like having a best friend you can’t get rid of. You know whatever you do, they’ll still be there.” – Amy Li

Bebe, Heather, Mimi and Laurie – popularly known as The Brown sisters have shown that sisters can indeed be best friends for life, through a very unique experiment – that although they had stumbled upon to pass boredom, eventually became an annual ritual that has continued for the last 40 years.

Nicholas Nixon met BeBe in 1970 and they were married the following year. Nixon was 21, and BeBe was 20. They would usually spend the weekends with BeBe’s parents and that’s where this magnificent idea originated. A single photo of BeBe and her three sisters (Mimi, Laurie, Heather) taken back in the August of 1974 to bide boredom, turned into a long term project for Nixon with the sustained co-operation of the four sisters. Even though the first photograph was not upto his expectations, the idea continued to linger in his mind before it metamorphosed into an annual affair.

A year later, at the graduation of one of the sisters, while readying a shot of them, Nixon suggested that the four sisters line up in the same order that they had done the previous year. After he saw the image, he asked them if they might do it every year and they seemed to concur with him on the idea. It’s been 40 years since and the sisters have met every single year for this photo-event. This long photo-journey stands testament to the power of one simple yet great idea and the endurance of sisterhood.

For 40 years none of the sisters have missed this annual ‘photo ritual’ event, which emphasizes the strong bond they have for each other, which would be what most families strive for. When the first photograph was taken Mimi was 15, Laurie 21, Heather 23, and BeBe 25. Despite passage of 40 years since, nothing seems to have changed between the sisters as they still seem to lean on each other with the same fond affection as the first, in each and every photograph.

What stands out in each of the photos is that the sisters have a rather serious look but the attitude they wear is unparalleled. Staring straight into the photographer’s lens, they stand closely in a loving embrace which illuminates the sense of sisterhood and unity. The sisters don’t seem to be perturbed either by the passage of time, life’s transitions, changing seasons or their ageing process. The location seems totally unimportant under the circumstances.

The consistency in the order in which the sisters pose for the camera is indeed noticeable – left to right, Heather, Mimi, BeBe and Laurie. Nixon consciously chose to use a 8x10in view camera on a tripod and black-and-white film. It has been that way ever since.

The natural light, the simplicity, the casual postures, unfussy preparations and glamour-neutral attitudes are the highlights of all the photographs. Bebe Nixon in an interview explained the secret behind these simple yet powerful portraits – “We sisters never discussed what we are going to wear. We just wore what we felt like wearing that day.”

Had the sisters decided to start a rock band these black and white photographs would have probably formed the ideal CD cover for their albums.

Pursuing the whole project always rested on the idea of mortality. What if one of the sisters die? Would Nixon still be enthused to take this annual ritual forward? The obsessive photographer that he is, Nixon explains “We joke about it. But everybody knows that certainly my intention would be that we would go on forever, no matter what. To just take three, and then two, and then one. The joke question is: what happens if I go in the middle. I think we’ll figure that out when the time comes.”

The series of portraits have been unveiled at Fraenkel Gallery booth at Paris Photo and Museum of Modern Art, New York, coinciding with the museum’s publication of the book “The Brown Sisters: Forty Years”.

Nicholas Nixon, who grew up a single child, has been especially intrigued by the endurance of sisterhood and the deep emotional connect among the sisters which enthused him to pursue this ritual for the last 40 years. The cumulative effect of this 40 year journey is indeed emotional, dizzying, nostalgic and sends out a powerful message to all the sisters across the globe. Also, the extraordinary cumulative power that rests on the photographer’s singular ability to capture the passage of time and, with it, human ageing, emotions and the lurking shadow of mortality, is indeed laudable.

In an era where siblings hardly meet or meet via video conference, the life long journey of the Brown sisters is a lesson on the paramountcy of togetherness and bonding.

Remembering A Mahatma : Dr. M. Karunanidhi & His Contribution To Upliftment of Women

In Conversation With Jochi Amma, A Tribal Woman From Wayanad, Kerala